The new take on the Lucy Maud Montgomery classic, called simply Anne, will air on CBC and Netflix in the U.S. next spring.

14-year-old Irish-Canadian beat out more than 1,800 contenders to star in the TV series Anne

For 14-year-old Amybeth McNulty, it's the role of a lifetime. She beat more than 1,800 girls from Canada and abroad to land the starring turn as Anne in the new CBC adaptation of Anne of Green Gables.

"She's riveting on screen, she's translucent. You can see every thought and every emotion," says writer and show-runner Moira Walley-Beckett of her show's star, who initially auditioned online from her home in Donegal, Ireland (McNulty's mother is Canadian).

McNulty, a self-described "bookworm" who read the Anne of Green Gables books when she was nine, says she shares many traits with Montgomery's feisty heroine.

"She has so much love for the world, which I think I share with her. And her curiosity about everything, how she can be so fierce and so bold but so gentle and so loving." 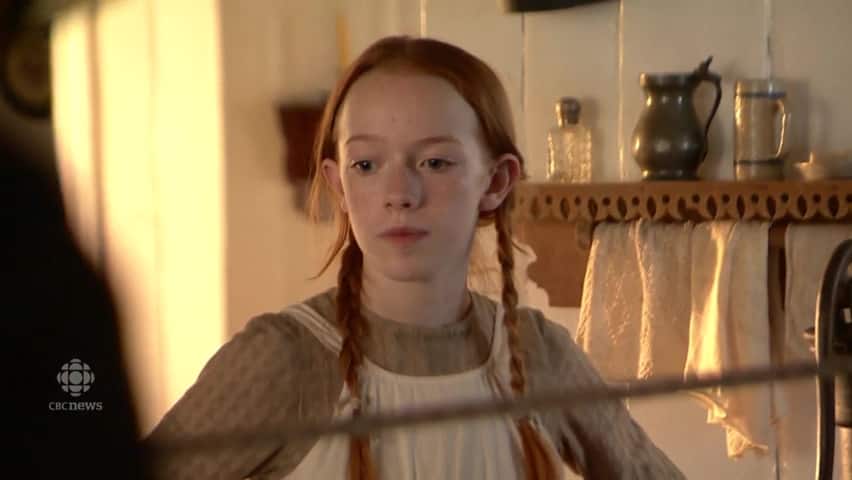 Her new role is also giving McNulty, who lives in Ireland, an opportunity to discover her mother's homeland. Accompanied by her grandparents, she filmed a portion of the series in Prince Edward Island, the epicentre of all things Anne.

"First of all, anywhere you turn is a postcard, instantly," McNulty said of the experience of filming in P.E.I. "It's so gorgeous and the people are amazing, they're so lovely and welcoming. It was so amazing to shoot there, to think that's where Anne of Green Gables is, and is so loved."

The Battle of the Annes

With seasoned actors R.H. Thomson (The Englishman's Boy, Road to Avonlea) and Geraldine James (Sherlock Holmes, The Girl With the Dragon Tattoo) filling the roles of Matthew and Marilla Cuthbert, the brother and sister who become Anne's guardians, the show-runners say they got their "dream cast."

But that still only goes so far in winning the audience. With such popular source material, this production of Anne has to stand out, not only from the past TV incarnations of Lucy Maud Montgomery's novel, but some current competition as well.

'It's not doilies and teacups, it's life'

The other, more aesthetic difference may have to do with Walley-Beckett's own background, steeped in gritty cable drama (she was a writer on AMC's Breaking Bad), not cutesy period pieces.

"This is a very grounded, real version of the story. Life in Prince Edward Island in the late 1800s was a hard, gritty, scrappy life. It was messy, it was covered in red mud," says Walley-Beckett.

"The weather, the seasons, it's all part of our story. It's not doilies and teacups, it's life."