Canadian writer Margaret Atwood and British author Bernardine Evaristo split the Booker Prize on Monday in London, after the judging panel ripped up the rule book and refused to name one winner for the prestigious fiction trophy.

Atwood is the oldest-ever Booker winner, while Evaristo is the first black woman to take the trophy

Canadian writer Margaret Atwood and British author Bernardine Evaristo split the Booker Prize on Monday, after the judging panel in London ripped up the rule book and refused to name one winner for the prestigious fiction trophy.

Partly inspired by the environmental protesters of Extinction Rebellion who were demonstrating near the prize ceremony's venue in London's financial district, Florence said the judges refused to back down when told the rules prohibit more than one winner.

"Our consensus was that it was our decision to flout the rules," he said. "I think laws are inviolable and rules are adaptable to the circumstance."

Prize organizers didn't see it that way. Gaby Wood, literary director of the Booker Prize Foundation, said prize trustees repeatedly told the judges they couldn't have two winners, but they "essentially staged a sit-in in the judging room" as deliberations dragged on for five hours.

Wood insisted the decision "doesn't set a precedent." It means Atwood and Evaristo will split the 50,000-pound (around $83,000 Cdn) Booker Prize purse.

Atwood revealed during a news conference that she plans to donate her share of the prize money to a scholarship for Indigenous students in environmental studies.

Florence said both of the winning books "address the world today and give us insights into it and create characters that resonate with us."

"They also happen to be wonderfully compelling page-turning thrillers," he said.

In an interview with CBC, Atwood said she was glad to share the prize, as winning it on her own would have been embarrassing.

"What these prizes do really is they should open doors for writers, but also for readers to become acquainted with books they may have not heard about before," she said. "It expands their opportunities and possibilities — not just for the writer, but for the reading community as well. And my book is already doing quite well."

In only a month, The Testaments has already sold a quarter of a million copies.

Atwood, who won the Booker in 2000 for The Blind Assassin, had been the bookmakers' favourite to win the coveted trophy for a second time with her follow-up to The Handmaid's Tale. At 79, this win makes her the oldest recipient of the prize.

Like that book — now a hit TV series — The Testaments is set in Gilead, a theocratic republic taken root in the United States, where young women are forced to bear children for powerful men.

Atwood's novel broke Canadian sales records when it was released in September and is being developed for screen by Hulu and MGM Television.

Her partner, Canadian novelist and conservationist Graeme Gibson, died shortly after The Testaments was released in September.

Florence, founder of the Hay literary festival, said Atwood's novel "does massively more" than just continue the story started in The Handmaid's Tale.

"It's beautiful in its depth and exploration of the world of Gilead," he said. It might have looked like science fiction back in the day. Now it looks more politically urgent than ever before."

Atwood also received a nod from Canadian Prime Minister Justin Trudeau, who applauded her Monday on Twitter for her work.

Evaristo, who is of Anglo-Nigerian heritage, is the first black woman to take the trophy. Evaristo has published seven previous books but is less known than her co-winner.

"I'm delighted to have won it, but there is a slight bittersweet quality to it, because I shouldn't' be the first black woman to win it," Evaristo told CBC after the ceremony.

"Hopefully this will be ... the beginning of perhaps this prize and other prizes in Britain becoming more inclusive."

Florence said he wasn't worried Evaristo, 60, would be overlooked as people focused on Atwood. He said "there is something utterly magical" about the 12 characters from many walks of life who narrate Girl, Woman, Other.

"They give a wonderful spectrum of black British women today," he said. "In that sense this book is groundbreaking — and I hope encouraging and inspiring to the rest of the publishing industry." 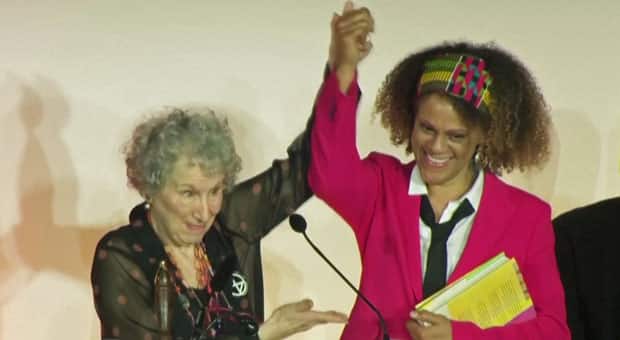 1 year agoVideo
0:57
'Neither of us expected to win this,' the Canadian author said of her and her British co-winner's rule-defying victory. 0:57

Founded in 1969, the U.K. prize is open to English-language authors from around the world. It has been split between two winners twice before, most recently in 1992, when Michael Ondaatje's The English Patient and Barry Unsworth's Sacred Hunger shared it. The rules were changed after that to stipulate there can only be one winner each year.

Judges chose the two winners from a six-book short list that also included:

The prize, which often delivers a big boost in sales and profile to the winner, was sponsored for 18 years by investment firm Man Group and was known as the Man Booker Prize.

This year it reverted to its original name, the Booker Prize, under a new sponsor: the Crankstart Foundation, founded by Silicon Valley venture capitalist Michael Moritz and his wife, writer Harriet Heyman.