A couture gown for a five-year-old. A $5 billion trust fund. Plastic surgery for a fish. An epic proposal featuring an elephant and Shah Rukh Khan. In Rich People Problems, Kwan concludes his hit trilogy about the unimaginably wealthy and positively outrageous schemers of the Asian jet set.

'I am closing the door, but I'm not locking it,' Kwan says of further Crazy Rich Asians stories

A Giambattista Valli couture gown for a five-year-old. A $5 billion trust fund. Plastic surgery for a favourite fish. An epic proposal featuring dozens of dancers and musicians, an elephant and Shah Rukh Khan.

The Singapore-born, New York-based writer talked to CBC News about wrapping up his blockbuster tale, why the third novel is more Downton Abbey-esque and visiting the set of Hollywood's Crazy Rich Asians movie.

Q: How does it feel completing your trilogy?

A: When we first spoke, it was the hope that [Crazy Rich Asians] would do well enough where they would let me do a second book and then a third book. That it's all happened is just really a privilege.

Q: Is there particular character you love to write?

A: I enjoy all the characters. I would have to admit though: the Eddie scenes and the Kitty Pong scenes are always the easiest chapters... I laugh myself silly as I write those.

Eddie is just the ultimate snob… He's just someone who is so insecure that his whole life is about surface and appearance. He goes to the ends of the earth to make himself seem so much more impressive than he actually is. There's something so heartbreaking, yet endearing and comical about it.

Kitty Pong is sort of like the dark horse heroine in the book. This is a woman who came from absolute nothing, who came from complete poverty… her only commodity is her sex appeal and her looks, so she's using that and her smarts in any way that she can to get out of the gutter and to really climb as high as she can up the social ladder of Asia. To me, she's a very endearing character. I was very inspired by Edith Wharton's book The Custom of the Country and the character of Undine Spragg.

Q: What's your response to criticism that you don't examine disparity of wealth in these Asian communities?

A: This is really a book about a group of people. It's about a family and it's about these characters — and so I'm exploring the issues within that very specific world. To do a compare contrast or to show this great gulf — which is a problem — that's a different book altogether. That's a book I might write some day, but for these people I need to be true to their story.

You do see that a bit [in Rich People Problems]… Kitty Pong, you find out a lot more about her in this new book and really what she went through to get where she is today. Hopefully that sort of explains the motivations behind these characters. There's another new character in the book, Lincoln, known as Ah Tock, who's also the "poor cousin" in the family. You see his frustration in life, as he's sort of the lackey of the family. So in my own way, l look at this world and try to address these issues specific to this world.

Hollywood should pay attention… There should be so many more movies, so many more TV shows, so much more media out there that really gives an accurate representation of our country, of Canada, of the world.- Kevin Kwan

Q: What was your impetus for bringing in more characters like Ah Tock?

A: I wanted to go back to [Tyersall Park] and for you to see this house — sort of like Downton Abbey or Brideshead Revisited — where you'd really see the inner workings of how a great house is run in Asia, what's really behind this family, the different people who run this world for them. I really wanted to get into that with this new book and introduce some interesting new characters that add more dimension to the story. 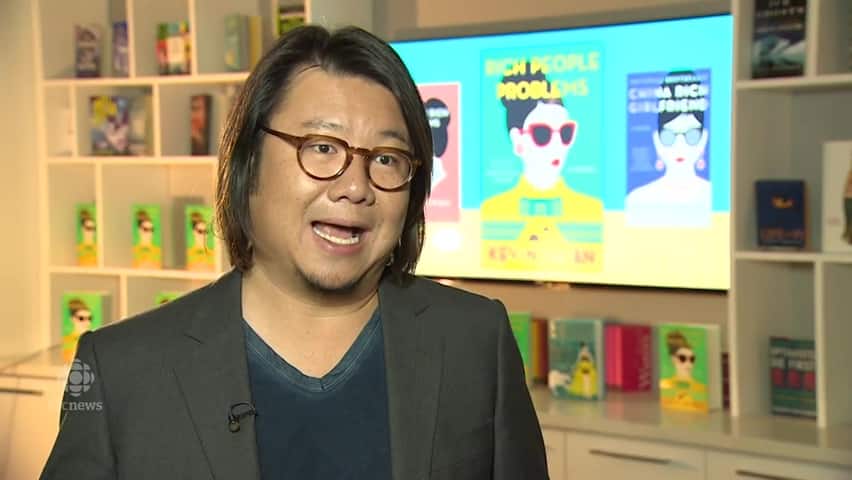 3 years ago
1:05
Author Kevin Kwan on what happened when he flew to the Singapore set of Crazy Rich Asians, the upcoming film based on his bestselling novel. 1:05

Q: How do you feel about the Crazy Rich Asians movie, now filming, being made at a time when the lack of Asian representation in Western visual media has become such a fiery topic?

A: That's why I began writing these books to begin with: because I felt that contemporary, modern Asia was so underrepresented in fiction. It was always my dream to really kind of enlighten people: "Hey! There's a whole world out there of empowered, attractive, dynamic Asians who could care less what's happening in Hollywood." But Hollywood should pay attention … there should be so many more movies, so many more TV shows, so much more media out there that really gives an accurate representation of our country, of Canada, of the world.

Q: Can you tell us about the TV series you're working on?

A: I can be involved so much more visually and in the design and much more of the visual aspects along with telling a story, crafting a story … it's such a great sort of marriage to be able to do that, so I'm also looking to tell new stories, with new characters, in a whole new world — that's really the hope for the TV show.

Q: Are you closing the door to these Crazy Rich Asians?

A: I am closing the door, but I'm not locking it ... I feel like we need some time for these characters to get on with their lives and for me to get on with my life. I might revisit them you know, yet again, but for now I have so many more stories to tell and some of them might not involve crazy, rich Asians. I don't just want to be the guy that wrote these books — I want to challenge myself and do something new.

Q: What then do you hope readers will take away from your "novel of manners" trilogy?

A: My number one thing in writing these books was to bring people joy, make people laugh and entertain people … beyond that, if they learn something, if it makes them curious about a certain part of the world, if it really kind of opens their eyes to how we're all alike and there's a universal shared experience in this world — no matter what colour you are or what culture you come from — all the better.

(This is interview has been edited and condensed.)