Gord Downie was not in Ottawa for the Juno Awards Sunday evening but his music was the talk of the show. He was among the big winners, as were Shawn Mendes and Alessia Cara.

'My father said that he saw a Juno in my future. Of course, it was his,' jokes Leonard Cohen's son, Adam

Gord Downie was not in Ottawa for the Juno Awards Sunday evening but his music was the talk of the show.

That's because Downie took home two of the night's seven prizes: songwriter of the year for his solo Secret Path project along with group of the year for fronting the Tragically Hip.

Downie did appear over video however, thanking the crowd for embracing Secret Path and "recognizing our friends who were here before us." The album tells the story of 12-year-old Chanie Wenjack, who died after running away from a residential school in 1966.

The Hip's Rob Baker and Paul Langlois were there to accept the group of the year prize on behalf of Downie and the rest of the band. And when their speech ran long, the show's producers tried to play them off the stage with music.

"Oh, you're actually going to play me out?" said Langlois, as he kept running through his list of people to thank.

At that point, the band's hit Ahead by a Century starting playing. He fired back by taunting the producers. "Go to commercial, go ahead," Langlois said. "This is my arena, not yours."

And that's precisely what the producers did, muting his mic and cutting to a commercial break. It was by far the most spontaneous moment in what was rather a pretty predictable live show, held at Ottawa's Canadian Tire Centre.

That's not to say the show wasn't entertaining. Russell Peters returned for his third stint as host, joined by Bryan Adams, who was hosting for the first time. The show started with Peters giving the rookie Adams advice: "Try not to s--- the bed."

It set the tone for Peters' jokes, familiar to anyone who has watched his stand-up specials or his past Juno hosting gigs in 2008 and 2009. Nothing and no one was off limits, with Peters ribbing Ben Mulroney, Thunder Bay, Ont. and Prime Minister Justin Trudeau, who was in attendance. 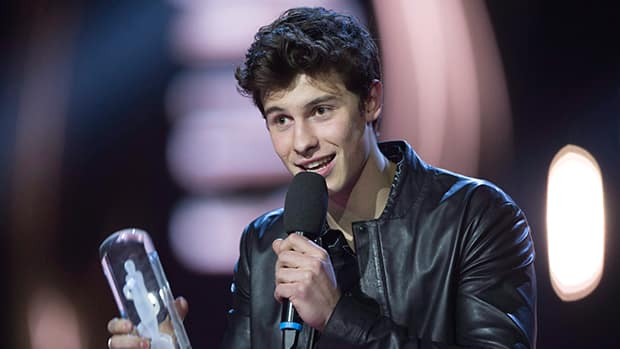 'Be kind to everyone,' says Shawn Mendes

4 years agoVideo
1:24
The Juno fan choice award winner has no problem being known as a nice guy, and says "there's nothing wrong with having a teenage girl fanbase" 1:24

"Oh my god, that reminds me, I left my dog in the car," he said after bringing up Sarah McLachlan, famed for her sombre SPCA ads.

Though Adams opted to mainly serve as the straight man to Peters' risque sense of humour, he too kept the crowd entertained, performing his tune You Belong to Me and closing the show as a star-studded rendition of his Summer of '69 included contributions from McLachlan, Alessia Cara, Whitehorse and Arkells frontman Max Kerman, among other nominees.

The night's remaining winners were:

MacLachlan was also inducted into the Canadian Music Hall of Fame during the near-three hour ceremony. In the most odd appearance of the night, a video touting her legacy was opened by Bill Clinton, who called her music a "gift to" him. 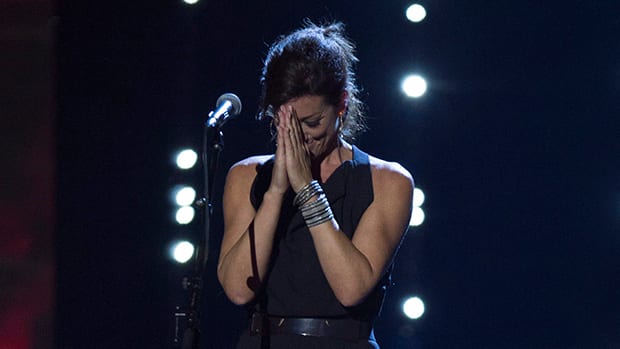 4 years agoVideo
2:09
McLachlan speaks about the progress women have made in the music industry and the work still to be done 2:09

"I have the best job in the world and I have so much to be thankful for," she said in her acceptance speech. "Music is my church ... because of music, my life has deeper meaning."

The bulk of the awards were handed out Saturday evening at a gala dinner where the big winner was the late Leonard Cohen.

The legendary singer-songwriter was honoured again Sunday night, with album of the year and a simple, moving tribute by Feist, who took on the Cohen tune Hey, That's No Way to Say Goodbye with just her guitar, her voice and two female backup singers — Daniela Gesundheit and Ariel Engle, her bandmates in the group Hydra.

The tribute was introduced by the prime minister and his wife, Sophie. They fondly recalled Cohen, who served as an honorary pallbearer at Pierre Trudeau's funeral and was a friend of the Trudeau family. 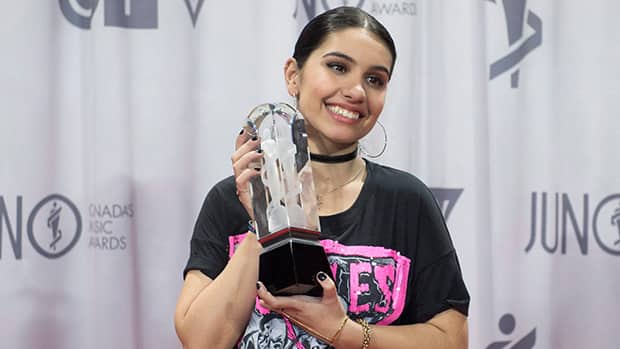 4 years agoVideo
1:36
Shortly after winning the Juno award for pop album of the year, press asked Cara with which performers she'd like to collaborate 1:36

Cohen's son, Adam, said he was moved by Feist's rendition of his father's tune.

"It takes a certain amount of courage to do something as stripped down as she did," he told reporters backstage.

Leonard Cohen won six previous Junos during his lifetime and was inducted into the hall of fame in 1991.

While accepting the album of the year award, Adam Cohen was joined on stage by his own son Cassius and remembered his dad with a sense of humour.