The Handmaid's Tale has renewed resonance and a new audience

Margaret Atwood's classic dystopian novel The Handmaid's Tale — the one that's required reading in most Canadian schools and that has been banned in some American ones — has given birth to its first television series, set to air in Canada April 30 on Bravo.

Margaret Atwood's classic dystopian novel The Handmaid's Tale  — the one that's required reading in most Canadian schools and that has been banned in some American ones — has given birth to its first television series, set to air in Canada April 30 on Bravo.

"I see it as something that was more of a potential back in 1985," Atwood told CBC News in Los Angeles Tuesday, referring to the year the book was published.

"More of a potential has now become more of an actual. The heartening thing is that a lot of people have become much more active than they were even during the [U.S.] election."

Atwood, along with Mad Men's Elisabeth Moss, Gilmore Girls' Alexis Bledel and other stars of the series gathered in Hollywood on Tuesday for the L.A. premiere of the series that premiers in the U.S. Wednesday on Hulu.

The Handmaid's Tale envisions a dark future wherein women's rights have been stripped and those who are fertile are forced to bear children for powerful men and their wives. Women's bodies are not their own and they are watched, controlled and harshly reprimanded for disobedience. The story is told from the perspective of Offred, a forced surrogate played by Moss.

"The rise of the alt-right, the battle for women's rights in every possible form, the battle for funding of Planned Parenthood ... these are issues we can't run away from," said Warren Littlefield, one of the show's executive producers.

"It's a dramatic thriller. But it does resonate and remind us that the world we're living in right now is shifting."

Cast members have been reluctant to call it feminist.

"It's not a feminist story. It's really a tale of humanity and how close we are to the edge," said Amanda Brugel, the only Canadian cast member in the series. 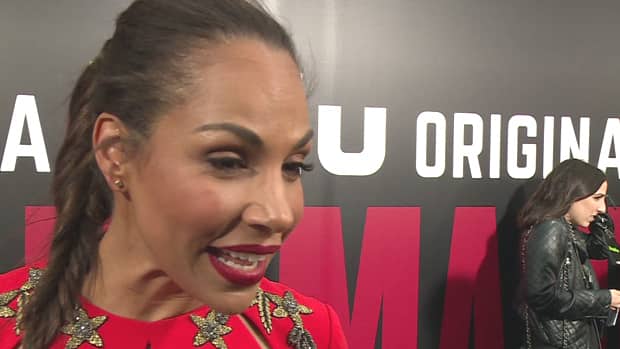 4 years ago
0:35
Series cast members Alexis ​​​Bledel, Amanda Brugel and Elisabeth Moss give their take on the story 0:35

At the Tribeca Film Festival, where the series was screened last week, Moss said during a panel discussion: "Honestly, for me, it's not a feminist story — it's a human story, because women's rights are human rights."

Following backlash online, and a gentle tweet from Atwood herself suggesting a little clarification might help and a "human rights definition" of feminism, Moss has since changed her stance.

"It 120 per cent is a feminist book and a feminist show," she told CBC News at the premiere.

<a href="https://twitter.com/KarmaLovesGumbo">@KarmaLovesGumbo</a> They needed an "only," an "also," and a human rights definition of the F word, imho.

Atwood was a consultant producer for the series, "which basically means I have conversations with people and then they do what they were going to do anyway," she joked.

"But luckily I approved of what they were going to do anyway so we didn't have any fights."

The revered author, 77, also makes a cameo appearance. Her character dishes out a vicious slap to Offred, played by Moss.

"We shot that several times because they said: 'You need to do it harder,'" said Atwood. "I gave her a little tap in the beginning and then they said: 'Come on!' I didn't want to give my leading lady a concussion."

The series was filmed in Toronto, which was meant to resemble a setting based on Cambridge, Mass., outside Boston.

"It was strange to be doing something that was so American at a time that was so tumultuous in America and not be in America," said executive producer Bruce Miller.

Still, Canada plays a notable role in the story — heading north becomes the plan for those trying to flee persecution.

"Canada has been escaped to many times," said Atwood. "So let us hope we can keep Canada as a place you can escape to."