For a more diverse Oscars, Hollywood must go back to high school 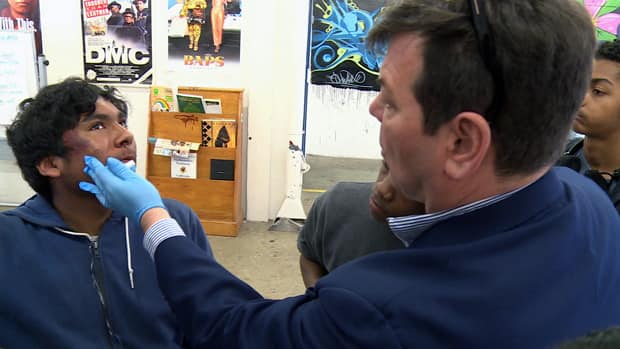 With a few flicks of a makeup brush, a few dabs of red, a swirl of brown, Donald Mowat transforms the young man from a student into a victim.

"It looks like something happened to him and he's just now going home to tell his momma about it," jokes a student, one of the dozen or so in the class crowded around Mowat.

"Can I give you a  couple of little abrasions?" Mowat asks. The answer is, of course, "yes." The high school students watch as Mowat gives his "victim" cuts, then bruises, then a bloody nose, all within the space of two minutes.

"You're so fast with that!" exclaims another student. "That's incredible!"

Mowat's so fast because he's one of the best. Normally you'd find the Montreal-born makeup artist on a Hollywood set, creating award-winning makeup effects for actors like Jake Gyllenhaal and Daniel Craig. But today he's sharing his craft with students at George Washington Preparatory High School in South L.A. Most of the students live in the poor and often violent neighbourhoods between Inglewood and Compton. Hollywood's only about 25 kilometres away, but it might as well be in Mexico.

That's why Mowat and a handful of other industry experts visit a couple of times a month to mentor kids at several inner-city schools like Washington Prep. To convince them they belong in Hollywood.

"I think some kids need a little bit more help," Mowat says. "And the ones that want to help, you can't not give it to them."

Over the last two years, much of the talk around Oscar season has been about the lack of diversity. The American Academy of Motion Picture Arts and Sciences, now headed by an African-American woman, has made several high-profile moves to increase the number of diverse Academy members. But to truly transform the industry, Mowat says, Hollywood has to go back to high school.

The program at Washington Prep helped the now 19-year-old Mariah Green land an internship at CBS, where she shadowed sitcom writers. Without the mentorship from Mowat and the other professionals, she says there's almost no way she would be at Cal State Northridge, where she has founded a student production company.

"Most communities don't have to feel discouraged, feeling like I don't have time to pursue this because I could lose my life tomorrow," Green says.

The problem, Mowat says, is that mentoring programs are surprisingly rare. The one that brings him to Washington Prep is organized and funded by the British film academy BAFTA; he says neither the American nor Canadian academies have anything comparable.

"Canada and the US ... seems to be a lack of ability to train or willingness to mentor," Mowat says. "Not everyone can go to school and go to those three- and four-year programs."

Rachel Miller, a partner at the L.A. production company Haven Entertainment, is the founder of a year-old mentorship program called Film2Future that gives high school students the chance to make a short film with real pros. She says when it comes to diversity, the industry talks a good game, but often isn't willing to fund initiatives that would actually address the problem.

"I think there's a lot of inertia," Miller says. "I think that it's easy to talk about something than to do something. Doing something is hard. It's tough."

And it's short-sighted, according to Franklin Leonard. He founded the Black List, a highly regarded yearly collection of top scripts that haven't been made into films.

"These communities are historically being shut out of opportunities that would allow them to prove their talent," Franklin says.

Bringing students from diverse backgrounds into the pipeline at a young age isn't just good for their individual futures, it's good for the industry as a whole, Franklin says, referring to a recent UCS study that suggests movies with diverse casts make more money at the box office.

"It's good for the bottom line, and I think that when you look at Hidden Figures being the top box office grosser of the Best Picture nominees and you look at the extraordinary success of Moonlight, I think it's really hard to argue," Leonard says. "The least expensive and most significant thing that the industry could do to change its economics in a radical fashion is to embrace diversity wholeheartedly."

"We really have to address the pipeline issue and the only way to do that is to start in high school; if we're waiting until college, it's just way too late," Miller says. "People have either dropped out of high school or gone into more traditional fields. While I was at NYU I taught a public school in Manhattan, and the lack of resources are shocking. So I think this idea in Hollywood that we're suddenly going to find diverse kids that go into Harvard or NYU or USC is a bit crazy. We have to start in ninth grade and help kids who are going to public schools who don't have computers or don't have Wi-Fi, who don't have art programs to help them be competitive, help them find their way through, and help them find the spark."

Just ask Elgin James. Not many directors in Hollywood come from as troubled a background as he. In his youth, he ended up homeless. In 2009, he served a year in prison for gang-related activities. But he found his escape in movies and, as an adult, moved to Hollywood where the 45-year-old has written and directed for television and film.

"I would have killed to have this program when I was a kid," James says. "To know that there's another way to be seen and to be heard in the world rather than just causing damage and havoc or just disappearing. So if there's anything that I can give it's that if I can do this, anybody can do this."

Background can be an asset

That's why he's sitting in a boardroom at Miller's production company with 17-year-old high school student Victoria Reese, giving her feedback on her idea for a TV show about Skid Row.

"The thing that we're most ashamed of, that we try to keep hidden from the world, is crazily enough the thing that makes us so unique," James tells her.

That's the same lesson 17-year-old Kimberly Villaseñor has been learning from her mentors at Washington Prep.

Till now, she imagined that few successful directors of photography were regularly jolted awake by gunshots. But now she feels that her background isn't a drawback, it's an asset.

"Because then I have a connection, I have a story to tell," Villaseñor says. "Everything in movies is fake, but when you see, these (mentors) are real people, you see these are actually jobs that I can do myself."