Eugene Levy on his humour, fan mail and why Schitt's Creek has to end

As fans mentally prepare to bid farewell to Schitt's Creek in its final season, co-creator and star Eugene Levy says the cast also had a hard time saying goodbye.

"There were a lot of tears when actors would finish their last scenes together," he told CBC's Andrew Chang in a sit-down interview for The National. "There would be 10 minutes of hugging and lots of tears."

Remember, it's Eugene Levy here, so just wait for it.

"You can't be, you know, crying your way through the scene," he continues. "That kind of just takes up time, and then you get into overtime. And then you're really crying."

Levy's deadpan humour has served him — and his Schitt's Creek character, family patriarch Johnny Rose — well over the years. But the American Pie actor says he never sets out to be funny. In fact, he doesn't believe he has the gene at all.

"I'm not a stand up, naturally funny person," said the Hamilton-born actor. "I don't look at the world through a comedic prism. The laughs that I get are through character. You just dive into a character and try to become the character and then, the moments are real moments."

That's become one of the standout characteristics of the TV series, which was nominated for multiple Emmy Awards in 2019, including one for Levy's performance and that of his Canuck co-star and fellow Second City alum, Catherine O'Hara. 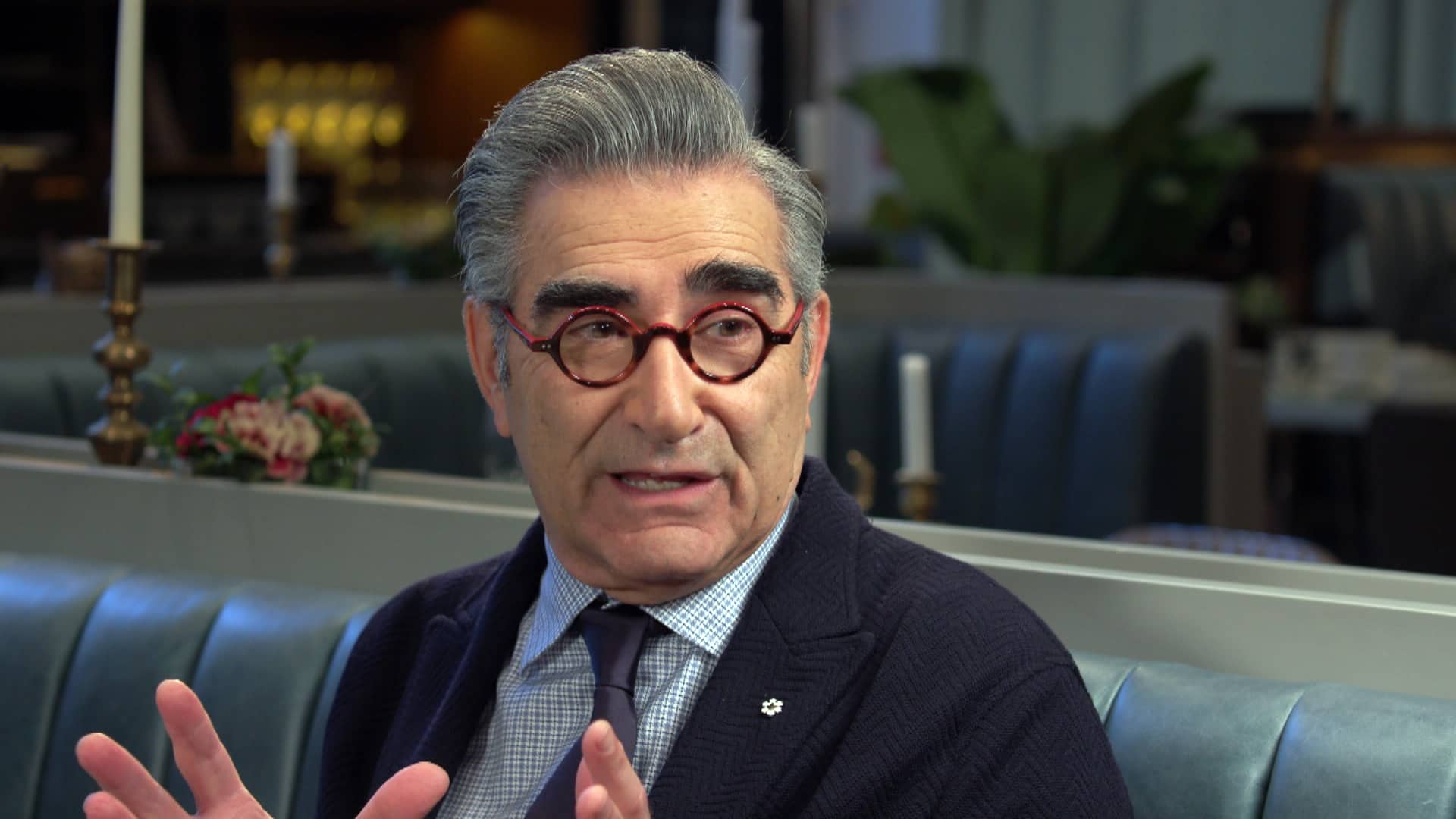 An emotional last day on set

Schitt's Creek, about a well-to-do family forced to move to a small town after losing their wealth, was co-created by Levy and his son Dan, who stars as David Rose. The quirky characters, rather than typical setup-punchline humour, are what bring the comedy to life.

Those characters have also helped break barriers, particularly when it comes to sexuality. Dan Levy was recently given a GLAAD award for promoting acceptance of the LGBTQ community. His character is pansexual — he's open to all sexual orientations and gender identities — and as such, became among the first depicted on television.

And yet, the series deliberately avoids clichés around the subject. The fictional town of Schitt's Creek, for example, is free from homophobia. And during a Season 5 episode in which David's boyfriend comes out to his parents, the parents are upset not because he's gay but because he didn't feel he could come to them sooner.

Watch: Legacy of the show is message of acceptance 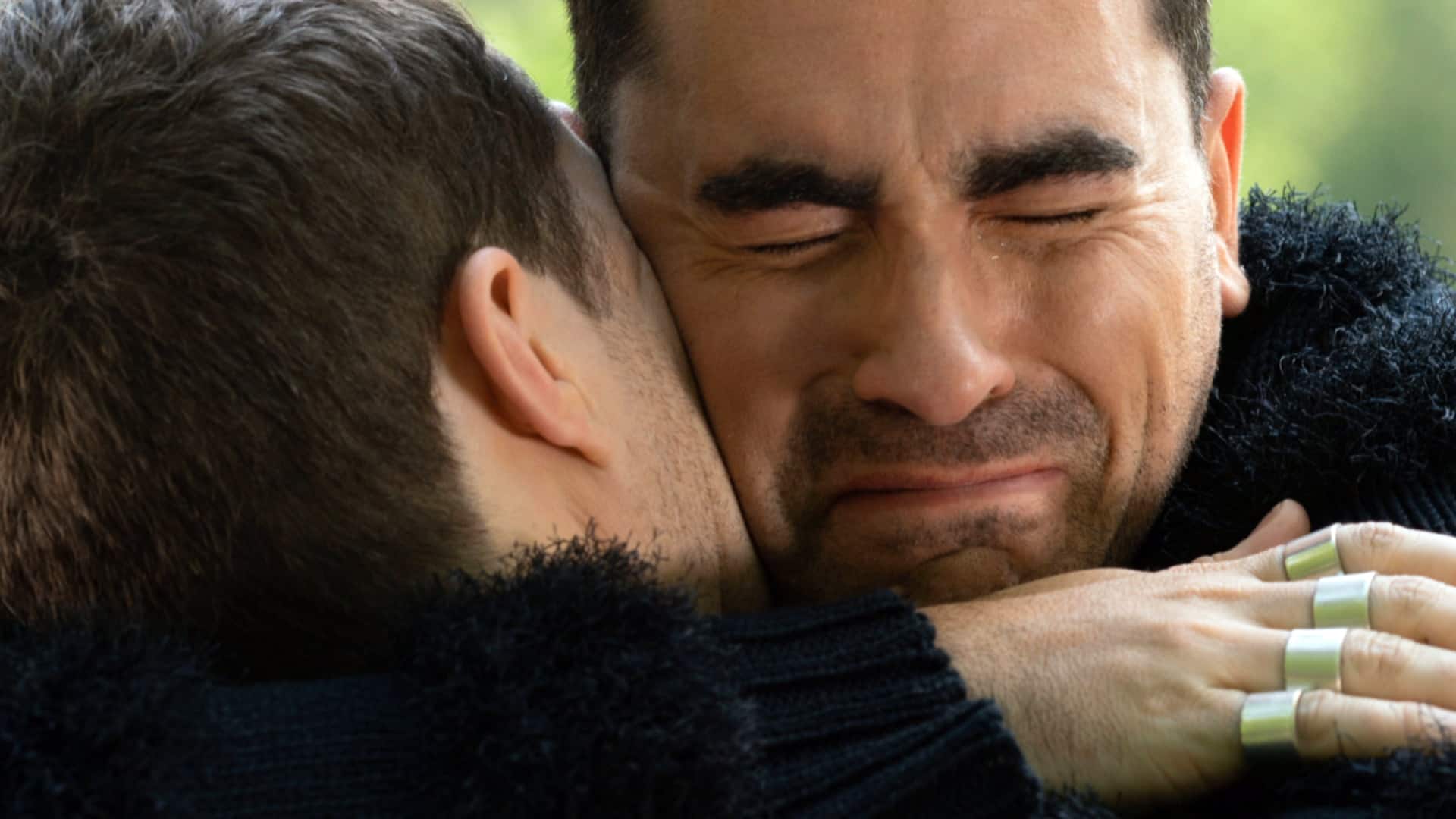 Legacy of the show is message of acceptance

1 year agoVideo
1:46
LGBTQ kids say that because of Schitt's Creek they were able to come out to their families. 1:46

"I think the message that this show is sending out in a certainly not-so-subliminal way is a very positive message about acceptance, inclusivity," said Levy. "Those are themes that we hit often on the show, and particularly in these times, it's a message that people are taking to in a big way."

Of the mounds of fan mail the series receives from around the world, Levy recalls one in particular that points to the kind of meaningful comfort he had hoped the show might offer.

The storylines came to a natural conclusion. Anything after that, you're not pushing anything forward.- Eugene Levy, on why Schitt's Creek is ending after Season 6

"One letter came in ... about a couple, tragically, who lost a child in the past year, and talked about the show as a way of them experiencing something that they never thought would happen again —which was to laugh."

And now, just as the show seems to be reaching an all-time high in popularity, it's ending. Its sixth and final season will begin airing Jan. 7 on CBC (and Pop TV in the U.S.).

Time to wrap it up

With the show's more recent recognition among American audiences after past seasons became available on Netflix, Levy says it's a "nice hotspot" from which to depart "when the going is good."

"The reason the show is ending after Season 6 is because that's when the storylines came to a natural conclusion," he said. "Anything after that, you're not pushing anything forward."

Not to mention his son, who also served as the series showrunner, just signed a three-year deal with Disney's ABC studios to develop new projects. After dedicating nearly a decade to developing and starring on Schitt's Creek, Eugene Levy's plans for the near future include less taxing endeavours.

"Hopefully a little more golf," he said. "Maybe travel, or do nothing! But it's nice to be able to actually get up in the morning and just think about where you want to go for lunch as the hottest thing on your agenda."

With files from CBC The National's Andrew Chang