Doctor Strange: No love story but lots of respect for Benedict Cumberbatch

Fans won't see romance in the new Marvel movie but that doesn't mean there's no love between co-stars Benedict Cumberbatch and Rachel McAdams.

Cumberbatch 'is one of the best talents out there,' says co-star Rachel McAdams 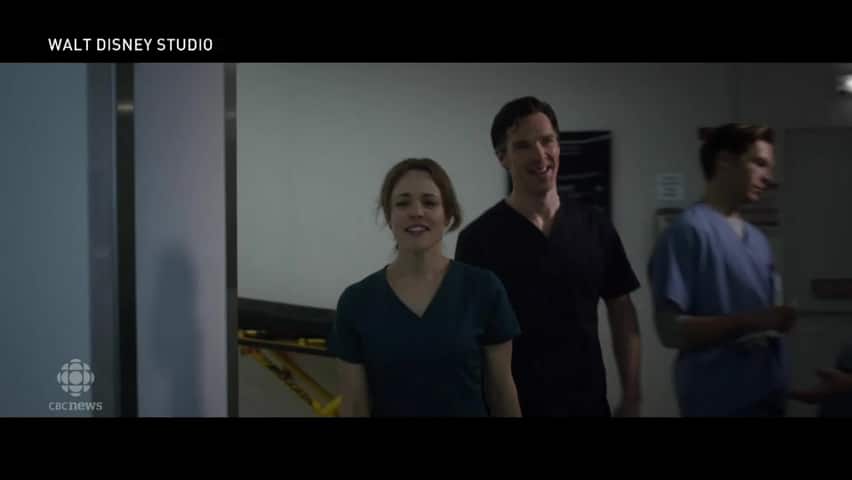 Rachel McAdams on the love between Doctor Strange and Christine Palmer

If audiences find the fantastical action particularly believable in Marvel's new movie Doctor Strange it's likely due to the chemistry between the film's stars Rachel McAdams and Benedict Cumberbatch.

Like the eponymous comic books, the movie centres on Dr. Stephen Strange, an egotistical neurosurgeon turned superhero who must save the world from mystical threats.

"I have to thank Benedict for helping me with that one," the London, Ont.-born actress told CBC's Eli Glasner.

"He was up on wires flying around the room—actually—so I was not really talking to tennis balls," she explained, referring to the sports item often used to stand in for absent co-stars.

Also absent from the film is a romantic love story between the two characters.

Early versions of the script called for Christine and Dr. Strange to be in a relationship but shortly before filming, director Scott Derrickson changed his mind.

"Scott came to us with this idea that they had already been through that and came out the other side of it as friends," said McAdams. "But I think that the love is between them no matter what stage they're at in the actual relationship."

Like her character, McAdams shares a deep professional respect for Cumberbatch.

"He's so wonderful," she said. "I think he's just one of the best talents out there."