Cute kids, family pranks, toy-unboxing videos: so-called family-friendly content is all over YouTube these days, but the DaddyOFive scandal and allegations of child abuse have unveiled troubling issues in the digital content creation community.

Stewart Reynolds has watched his teen sons Owen and Gregor grow up to become popular digital content creators. But the patriarch of a whole family of vloggers says he always operates with a few key things in mind — including a principle that says anyone who doesn't want to be on camera doesn't have to be.

"There's nothing worse than that cringey feeling [when watching a video and] thinking 'I don't know if everyone in this video wants to be in this video.' That's not our style," the Stratford, Ont.-based man behind Brittlestar.

Secondly, he says he always works with the notion that "everything that you're putting up on the internet is going to be archived and will show up somewhere. So when you're deciding what to post online, think about it."

Cute kids, family pranks, toy-unboxing videos: so-called family-friendly content is all over YouTube these days, but a recent scandal and allegations of child abuse against the parents behind a channel called DaddyOFive have unveiled troubling issues in the digital content creation community.

Maryland father Mike Martin and his wife Heather, who preside over a blended family of five kids, are at the epicentre of the latest explosive controversy.

Martin's family-centric DaddyOFive channel — which racked up more than 750,000 subscribers and once featured hundreds of videos  — was recently called out by several prominent YouTubers for so-called "prank videos" that featured the couple berating their children with foul language, breaking the kids' toys and encouraging the siblings to commit violence against one another. 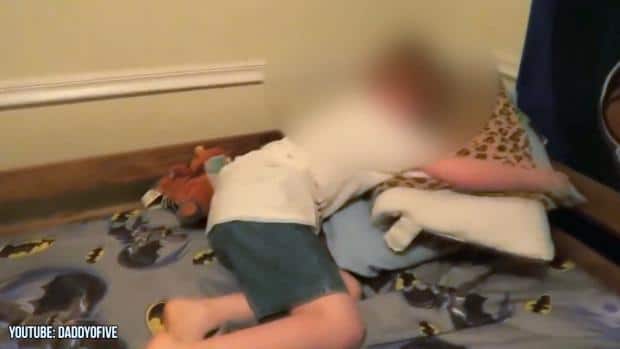 After a recent post ignited an online firestorm, Martin and his wife temporarily lost custody of the two youngest children to the biological mother.

The couple at first claimed their pranks had been staged, and dismissed their critics as people simply out to spark a YouTube drama.

But the backlash and instant notoriety eventually led them to remove their entire archive from public view, hire a crisis communications firm, post a mea culpa video and participate in a host of mainstream media interviews apologizing for "poor decisions."

In the apology video, which has been viewed by more than 3 million people, Heather Martin said "we're the parents and we should have made better decisions."

"We're focused on making sure our kids don't have to deal with so much backlash from our bad decisions and we realize now what kind of situation we put them in," she said. "We're just really sorry to them."

A spokesperson for YouTube on Friday told CBC News that ads had been removed from the couple's channel.

"Videos that are found to be in violation of YouTube's community guidelines are removed from the platform," the video-sharing giant said.

Reynolds, who has worked as an digital content creator since 2013, said some vloggers feel a push to get numbers.

"Once you start to get a little bit of success and maybe it turns into a money-making situation... that can be what you're thinking about all the time," said Reynolds, whose website promises "irreverent family-friendly" content.

The stage mom, stage dad transferred into [the YouTube ] world? That scares me to death...Your dad and mom are the producer, the director and the editor.- Dan Speerin , Independent Web Creators of Canada

"When adults start bringing children into that mix, that's not a great combination," said Speerin, noting that even the established TV and film industries continue to face stories of young performers being exploited or manipulated.

"The stage mom, stage dad transferred into my world? That scares me to death...Your dad and mom are the producer, the director and the editor."

While tech companies are following laws, said Cathy Wing, co-executive director of the Canadian non-profit digital literacy group Media Smarts, "the problem is the laws aren't keeping up with technology."

Media Smarts, which conducts comprehensive studies into Canadian children's use of the internet.

"Children are protected in traditional media — with strong labour laws, child actor laws, laws to protect the money they're making — but it's a real grey area with user-generated content."

400 hours of new video per minute

Given current estimates of more than 400 hours of fresh video content posted to YouTube every minute, there are no easy solutions regarding video moderation and preventing shocking, offensive material from turning up online.

It was the YouTube community that raised the outcry against DaddyoFive, but that doesn't mean creators now want stiff regulations rushed into place to prevent more of the same.

Allegations of child abuse are as upsetting to the YouTube community as to anyone else, Speerin said.

"We want that off that platform' — but how we'll go about getting that off the platform is where the disagreement will occur," he said.

Open communication and consultations with the creative community are one part of the answer, according to Speerin. That's also something Reynolds agreed with.

"YouTube has the potential to set up some sort of department or panel to monitor this stuff, to work with the content creators...to determine everyone's happy and there's no one being harmed," the vlogger said.

Ultimately, "protecting children, especially from psychological harm, financial exploitation and child abuse — you would hope that we could find a way to extend those kinds of protections, as a society," Wing stated.

In the meantime, she said parents putting their kids online need to truly think posts through, stay mindful of their children's emotional state every time — carefully watching for cues of anxiety and discomfort — and be wary when freebies and financial incentives are part of the equation. Minors can't really give consent, she added.

"Oversharing images of your kids or personal details -– at some point your child may look back and not want that and be really upset," Wing said.

"For children, we may think they like to be bought off, but in fact the most important thing for children is that they feel safe and secure in their surroundings."