'The puzzle that we all need to solve': Canada's theatre community ponders comeback amid COVID-19

While staying engaged with fans during the pandemic via digital experiments, streams of pre-recorded shows and social media outreach, Canada's theatre community is gamely planning its revival and imagining exactly how to retake the stage.

'We need to prepare for the worst-case scenarios,' says head of theatres association

It's been two months since the COVID-19 crisis brought the curtain down on Canada's theatres, and each week seems to bring fresh announcements about seasons being cancelled or postponed from Vancouver's Arts Club Theatre Company to Ontario leaders, such as the Stratford Festival and Mirvish Productions, to the venerable Charlottetown Festival.

Even Broadway, the behemoth next door, will remain shuttered through Labour Day.

However, Canada's theatre community — whilst staying engaged with fans during the pandemic via digital experiments, streams of pre-recorded shows and social media outreach — is gamely planning its revival and imagining exactly how to retake the stage.

"The campaign for Canadian theatre in general — whether it's Stratford to the smallest indie theatre company — is how to make our audiences come back and how to make them feel safe, so that they keep coming back," said Nina Lee Aquino, artistic director of Toronto's Factory Theatre and president of the Professional Association of Canadian Theatres.

Gathering for a shared experience is at the heart of theatre — but it's also what the COVID-19 pandemic has taught us we shouldn't be doing, she said.

"That's the puzzle that we all need to solve."

10 months ago
1:31
Factory Theatre director Nina Lee Aquino on the paradox facing theatres: how does an art form dependent on bringing creators and audiences together do so amid a pandemic? 1:31

Theatre creators are brainstorming multiple, constantly shifting scenarios for when public health authorities will allow them to raise the curtain again.

"What does our season look like if we start in January of 2021.… What if there is no theatre for a full season? We've got to plan that," Aquino said. "What if the government says theatres, sporting events, cinemas just cannot open until 2022? We need to prepare for the worst-case scenarios."

That uncertainty is among the biggest obstacles holding artists back, she believes, because once there is an idea of when reopening will be possible, Aquino has no doubt the theatre community will dive back in with enthusiasm.

"You're talking about artists here: we make the impossible possible. If there is something to respond to, we will respond to it and do it as creatively as possible, within the limits," she said.

Optimism for reopening this fall or next winter — albeit fully expecting to play to a much reduced audience of physically distanced patrons — is what's driving Bernard Gilbert, general manager and programmer of Le Diamant.

The Quebec City cultural space and home base for Robert Lepage's production company Ex Machina had just celebrated the six-month mark for its inaugural season when the pandemic shut everything down. If allowed to reopen for even a fraction of the audience it's able to host, "then we would have a sense of doing … what we're supposed to be doing: a public service of presenting arts in the city," Gilbert said.

He and his team are busy dreaming up different types of live performances that they could stage: small acoustic concerts in the foyer, a simple circus duo or even a Lepage VR installation. 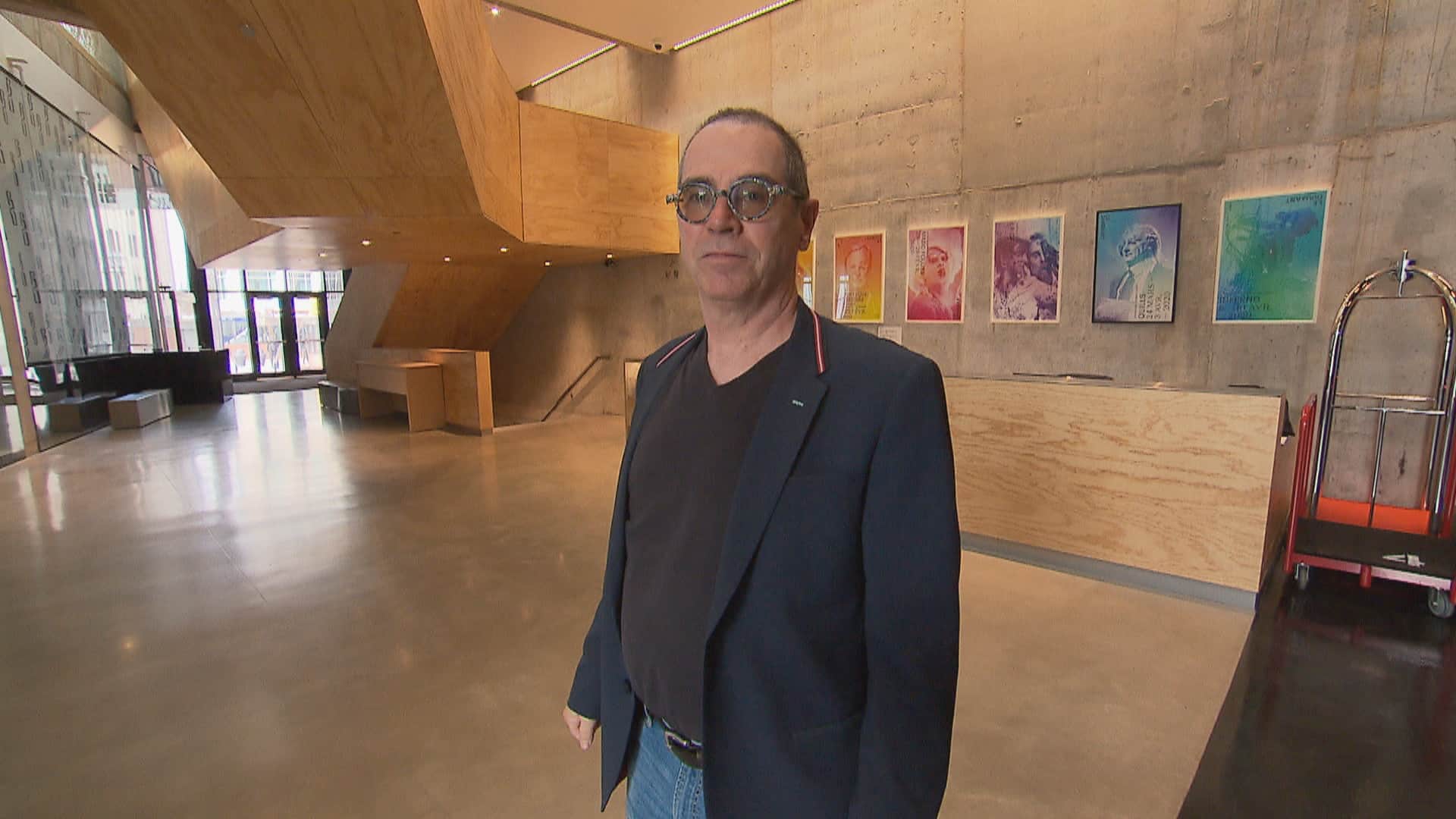 Until the large scale gatherings we're used to are permitted to return, Gilbert is determined to find some way of staging small, lower-cost performances — say $20 to $25 a ticket — that will generate income for artists and provide audiences with "an artistic experience, live in a theatre."

While he's thankful for the government pandemic aid currently being offered, Gilbert wonders how long the federal financial support can realistically continue for sectors that remain shuttered.

"The longer the break, the harder I think it will be to stay put, stay afloat and reopen in good manner," he said.

"Our goal in life, me and my colleagues, is to have audience members, parts of our population to come into our building to see and hear performing arts. So it's our job to find a way for them to be able to have that kind of experience, when it is possible."

'An obligation' to help community recover

Beyond its own struggles with the pandemic shutdown since mid-March, Shaw Festival's executive director Tim Jennings also feels the weight of being a destination-based theatre company that's a major contributor to its community. The Shaw generates an economic impact of about $220 million a year for the greater Niagara region, he said.

"Ninety per cent of our audience comes from over 100 kilometres from us," Jennings said, adding that seeing a Shaw Festival show can be the central inspiration for visitors planning a trip to Niagara-on-the-Lake, Ont.

"The area's beautiful. So, no surprise, [visitors] go to the wineries. They go to the restaurants. They take in [Niagara] Falls. But they anchor that stay with the Shaw."

So far, the approximately 220 performances he's had to cancel means a loss of $8 million, said Jennings, who estimated that figure translates into a loss of at least $40 million for the wider community.

"We feel we have an obligation … to help the area recover as soon as we're able to. We're going to be on the front line of trying to get back up and running, as soon as it's physically possible and safe to do so."

Amid the financial woes, however, is one bright spot: the company decided in late 2016 to boost its disaster insurance coverage, and the plan happened to include pandemics.

"It certainly won't make us whole, but it's allowed us to keep everybody on and working up to this point, which we're very excited about," Jennings said.

I really feel fortunate that I'm in an industry where optimism is a big part of our daily bread. We all take a big leap of faith in even just going to opening night. So, we're taking a bigger act of faith.- Tim Jennings, Shaw Festival's executive director

Thanks to that insurance coverage along with supportive Shaw Festival donors, Jennings was able to keep about 350 of 400 people employed over the past two months, with the remaining 50 or so part-timers moved over to the federal pandemic wage subsidy. Rehearsals continued — via video conferencing — for 10 productions until earlier this month.

"There's only so much you can do by Zoom rehearsal."

Jennings has also turned his attention to how Shaw might adapt to the new normal once allowed to reopen. Like Aquino and Gilbert, he's spoken with peers across Canada to share information and ideas.

'Hand sanitizer in unbelievable numbers of places': how theatres could change amid COVID-19

10 months ago
1:20
Shaw Festival's executive director Tim Jennings on changes he's exploring for when theatres are permitted to reopen. 1:20

Every company will be making very different decisions "based on what kind of facilities they have, what kind of available spaces they have, how they work with their artists [and] what their artists are willing to do," he said. Shaw has a few positives to work with, including a rural location with accessible outdoor spaces and an acting ensemble that includes many couples who can perform together closer than actors who would have to remain at a physical distance, he said.

In the coming months, Jennings predicts we'll be seeing "some very unusual kinds of theatre," anything from "circles of cars with artists performing in the middle of a parking lot" to more live-streamed performances to a resurgence of one-person shows.

"I really feel fortunate that I'm in an industry where optimism is a big part of our daily bread. We all take a big leap of faith in even just going to opening night," he said. "So, we're taking a bigger act of faith."