Come From Away musical leads contenders for Washington theatre prize

Come From Away, the uplifting new Canadian musical about airline passengers stranded in Gander, N.L., following the Sept. 11, 2001 terror attacks, has picked up a leading 14 nominations for an American theatre honour.

Come From Away, the uplifting new Canadian musical about airline passengers stranded in Gander, N.L., following the September 11, 2001 terror attacks, has picked up a leading 14 nominations for an American theatre honour.

The Broadway-bound musical leads the race for the Helen Hayes Awards, which recognize professional theatre productions performed in the Washington region. The ceremony is set for May 15 at the Lincoln Theatre in Washington, D.C.

Created by Toronto theatre artists Irene Sankoff and David Hein, Come From Away has been a hit and enjoyed rave reviews during its pre-Broadway run. In addition to Washington, D.C., it's also been staged in La Jolla, Calif., Seattle, Toronto and Gander. 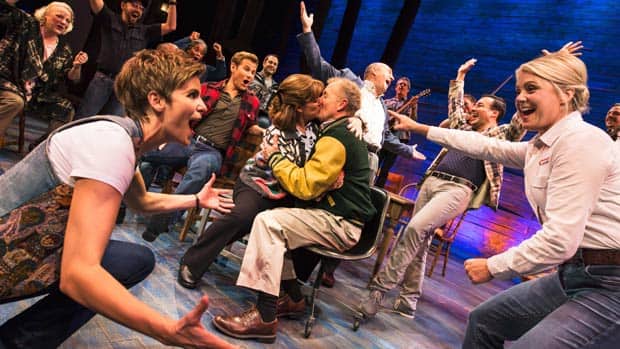 4 years agoVideo
1:45
The show is based on the true story of Newfoundlanders who housed more than 6,500 stranded airline passengers following the 9/11 attacks 1:45

Inspired by the real-life story of what happened when nearly 7,000 people were stranded in Gander after U.S airspace was closed on 9/11, Come From Away has fresh relevance today, according to star Petrina Bromley.

"It's a story of a life-affirming event coming out of something incredibly dark," she told CBC's q during an interview last fall.

"The idea that people who are strangers from another place can come somewhere and be greeted with open arms and accepted into the community — I think that's a story that people want to believe can happen because we see so much of the opposite of that in the news."