'A cool family legacy:' Who was the Canadian Sgt. Pepper who protected the Beatles?

'There was a mutual respect,' says Sgt. Pepper's granddaughter 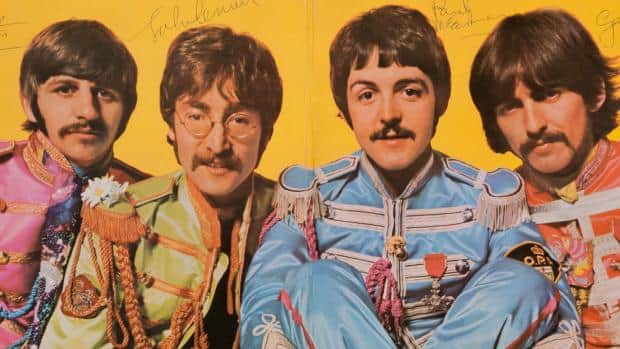 In 1964, Ontario Provincial Police Sgt. Randall Pepper was tapped to head security detail for the Beatles, who were in Toronto for two concerts.

"He took that very, very seriously even though he thought the Beatles were ruffians and hooligans. Of course, in the 1960s, young men were supposed to have nice, clean-shaven hair," Finn told CBC News host Heather Hiscox on Thursday morning.

"There was a mutual respect" that grew between her grandfather, now deceased, and the band, she said.

In 1967, however, when the band released its innovative album bearing his name, Sgt. Pepper still wasn't starstruck.

But what about that "O.P.P." patch on Paul McCartney's shoulder on the Sgt. Pepper's album cover? That led to headaches for the real-life Sgt. Pepper because it wasn't his patch, according to Finn.

"He actually got into a lot of trouble from his supervisors because they thought he had given Paul that patch. That's kind of the mystery: where did that patch come from? I've heard some reports that an officer gave it to [the band] when they were leaving Canada, leaving the airport."

While the music and style of the McCartney-driven concept album drew from multiple, wide-ranging influences — from his toying with the idea of a military band "alter ego" for the Beatles to facilitate more experimentation, to admiration of the Beach Boys' Pet Sounds to the rising 1960s counterculture movement — it was simple wordplay that inspired the title. McCartney has attributed it to an "aural pun" born of an in-flight chat about salt and pepper packets.

Still, Finn is happy to bask in the nostalgic celebrations around Sgt. Pepper's Lonely Hearts Club Band for today's anniversary — and to share her family's connection to the Beatles.

"It's kind of a cool family legacy and it's wonderful to hear our family name in the news today."