Canada 150 makes it on Jeopardy! board with Alex Trebek

Jeopardy! host Alex Trebek celebrated Canada Day with a category on the game show Friday about the country's sesquicentennial.

Jeopardy! host Alex Trebek celebrated Canada Day with a category on the game show Friday about the country's sesquicentennial.

"Canadians are highly respected, as you know, no matter where you travel in the world," Trebek, who is an official representative for the Canada 150 celebrations, told CBC News in Los Angeles. "Here, in California, you mention you're from Canada and people just look at you in a friendlier way."

The popular game show, which Trebek has been hosting since 1984, showcased a series of clues that most Canadians would have had little trouble getting right. They ranged from correctly identifying the Quebec flag to naming the national anthem.

"We weren't really making it too difficult on Americans," the Jeopardy! host joked.

The Sudbury, Ont., native, 76, was also honoured with the Order of Canada Friday, along with other famous faces including Mike Myers and Catherine O'Hara.

"You could have received it in any year and it would have been something special for you and your family," said Trebek. "But to have it in conjunction with Canada's 150th birthday, it just says they gave this a great deal of thought and that makes me feel very proud." 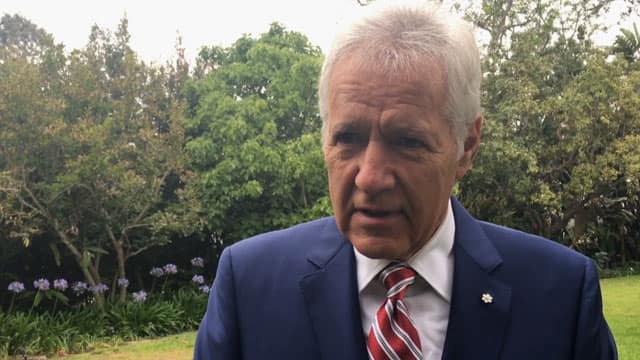 3 years ago
0:59
The Canadian-born Jeopardy! host explains his elation at receiving the award during the country's 150th birthday 0:59

Trebek, who began his career at the CBC in 1962 and has become synonymous with the television quiz program for the last 33 years, opened Friday's show sporting a Canada 150 jersey.

Before the credits rolled, he said, "we're partying for the next four days, folks," referring to both Canada Day and American Fourth of July festivities.