Céline Dion was greeted by a standing ovation upon taking the stage at The Colosseum at Caesars Palace, her first performance since the January death of her husband René Angélil. 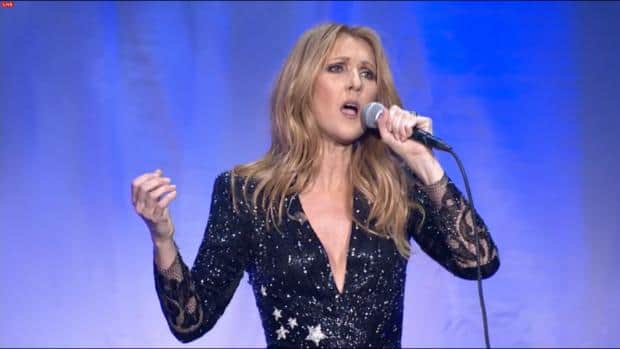 Céline Dion has returned to the stage in Las Vegas for the first time since the death of her late husband René Angélil.

Dion, clad in a long black dress, was greeted by a standing ovation Tuesday night that lasted over a minute upon taking the stage at The Colosseum at Caesars Palace.

The 47-year-old began her set with With One More Look at You, first popularized by Barbra Streisand in A Star Is Born.

Dion spoke about her husband for several minutes after the opening number, stating that while Angélil is no longer physically with her, he is ever present.

"Every time I closed my eyes I felt René onstage with me," she said.

"He has always been onstage with me, and nothing will ever change with that," she added.

Dion said she engages in a constant dialogue with Angélil, joking, "now I can tell he is telling me to 'zip it' and start singing [again]."

After some brief words in French, Dion continued the performance with Where Does My Heart Beat Now? and Because You Loved Me.

A public memorial for Angélil was held at the same venue in Las Vegas on Feb. 3, about two weeks after about 700 attended a funeral for the singer's husband and manager at Notre-Dame Basilica in Montreal.

The 73-year-old died Jan. 14 after a battle with throat cancer and was also survived by his six children, including three with Dion.

A video tribute to Angélil's life preceded the performance, which was also available via a live stream on the superstar's Facebook page.

The "love tribute" that preceded the performance will be repeated before each of Dion's shows in Las Vegas over the next three weeks. The Quebec singer plans to perform in Belgium and France this summer before staging several performances in Montreal and Quebec City.