Céline Dion said her husband kept her grounded and protected her from the gritty business details of her superstar career. 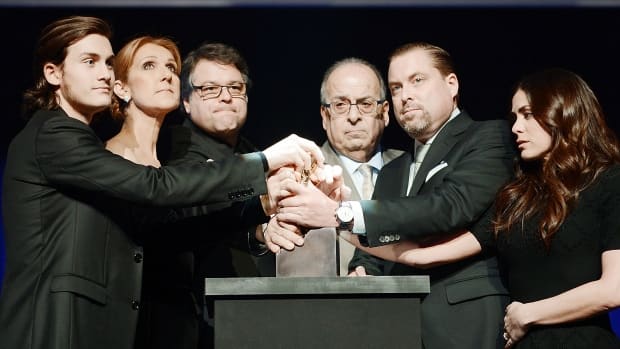 Céline Dion said her husband kept her grounded and protected her from the gritty business details of her superstar career.

The singer, who spoke for the first time publicly since René Angélil died, paid tribute at a Wednesday night memorial at The Colosseum at Caesars Palace in Las Vegas.

People gathered to celebrate the life of her late husband and manager, credited with striking the deals that have defined her as one of the most popular voices in the world, from saying "yes" to her defining hit from the Titanic when critics doubted the movie to her glitzy Las Vegas Strip residency.

"I was never part of any of the meetings that he had where he had to say yes or no. He protected me from Day 1 to for the rest of my life, I am pretty sure of that," Dion said in a nearly 20-minute speech.

Angélil died on Jan. 14 after a long battle with throat cancer in the suburban Las Vegas home that he shared with Dion and their three children. He was 73.

At his Jan. 22 funeral at the Notre-Dame Basilica in Montreal, their eldest son, René-Charles, gave the eulogy to a crowd of nearly 700 people before Angélil was buried at the Notre-Dame-des-Neiges cemetery in a private graveside ceremony. The family, on the previous day, had spent nearly seven hours greeting fans and mourners at a public visitation at the same Canadian church.

Dion, wearing a shoulder-baring black dress and her hair in a soft bun, didn't sing during Wednesday's Las Vegas memorial, but her famous discography was on display throughout the night. An instrumental version of her 1990s hit Because You Loved Me played as one of the interludes between speeches at the event that ran for more than two hours.

Longtime friend and collaborator David Foster sang The Colour of My Love, a nod to the couple's song at their wedding 21 years ago. It left Dion in tears.

Mother and son sat on stage along with Angélil's children from previous marriages and his brother, as memories were shared from guests, who ranged from Dion's longtime agent and friends in the music business to Caesars executives and a Las Vegas charity for people with disabilities.

They all described a man who was kind, generous and completely devoted to his wife and her talent. Angélil loved his family, gambling and dining and entertaining.

Dion's tribute to her husband was not without humour, including how she watched game shows and sports with Angélil when he was convalescing.

"I would say touchdown when it was not time," she said, drawing laughs.

Born in Montreal to a Canadian mother and Syrian father, Angélil was a former singer-turned-manager who discovered a 12-year-old Dion and mortgaged his house to finance her first album.

He guided her career most of her life, most critically as she learned to sing in English to become a widespread international success. By the late 1990s and 2000s, her soaring voice had become dominant on the radio.

To underscore his influence, longtime associate and friend Paul Farberman recounted at the memorial that the Titanic deal was far from certain when Dion was first approached to sing the film's theme song.

She rolled her eyes when she first heard it played on the piano and there were questions about the negative press for the movie, over reports that it was over budget and about on-set fighting.

"It didn't look like this was going to be a big success story," Farberman said of the eventual blockbuster.

"And I'll never forget how René literally stood up from the table and he said 'I'm a gambler and I'm going to bet on this one.' And of course, the rest is history."