Kennedy, who was born and raised in Ottawa, died on Monday, according to a statement from her family.

Kennedy's interviewing ease charmed audiences but she said her career in broadcasting actually came about by fluke. She got her start at the Ottawa Citizen, working on the newspaper. When the paper's staff went on strike, she was asked to host a radio show in an effort to keep subscribers from fleeing. 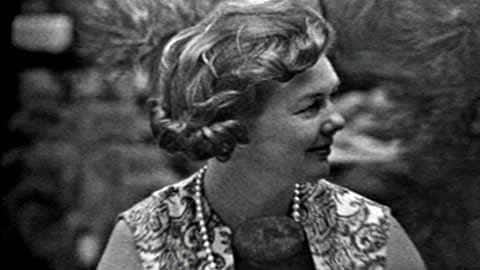 1 year agoVideo
11:49
The radio host and member of the Front Page Challenge panel describes a memorable interview in 1965. 11:49

CFRB, the talk radio station in Toronto, took notice and she soon made the jump to the city to host her own program: The Betty Kennedy Show. That's where she developed her signature interviewing style — posing a question and just letting her interview subjects talk. And they liked it.

During an interview on the show with American architect Buckminster Fuller, he told Kennedy: "I don't think I recall a conversation where anybody has been quite as logically sensitive as you are about these questions you ask."

"She was always extremely polite and thoughtful. And she had a huge listenership and anybody in politics or public life at that time, that's the show you wanted to be on."

In the show's 27 years, Kennedy got to talk to 25,000 guests, from celebrities and politicians to community builders.

She recalled her beginnings in a 1965 TV interview with CBC's Elwood Glover. "It's very much a sink or swim business. If you're lucky enough to get in, you're really on your own." He commended her on her interviewing style and the questions she chose to ask. Kennedy compared it to everyday life.

"Your own mind and your own curiosity is often the best guide, I think, on what you ask. If you're curious about something, chances are somebody else is too," Kennedy responded.

But it was her appearances as a panellist on CBC-TV's Front Page Challenge that's she's perhaps best known for. She started with the show in 1962 and lasted until its cancellation in 1995. The show saw panellists try to guess a mystery guest who they would then interview.

There she was paired with famed journalists like Pierre Berton and Gordon Sinclair, something she found intimidating at first. She said she was "scared to death" to start, but soon found that both men weren't that "frightening at all."

The show's one-time producer Don Brown once said she was a perfect fit: "She has class. She's a very experienced journalist. She brought dignity, a femininity, a cool, controlled intelligence."

"When I first met Betty Kennedy I was a young reporter working for The National. She was a network star because of Front Page Challenge and her work in Toronto on CFRB. But she immediately treated me as an equal and made me feel totally at ease," said Peter Mansbridge, chief correspondent of CBC News.

"She was always classy and elegant in the way she went about her business and was adored by her fans. Broadcasting and journalism lost a leading lady with her passing."

In her post-broadcast life, she sat on many different councils and committees and enjoyed being outdoors — swimming, bird watching and fishing with the Ristigouche Salmon Club in Quebec.

She was a longtime Liberal supporter; former prime minister Jean Chrétien appointed her to the Senate in 2000, at age 74. Since the mandatory retirement age is 75, she spent less than a year there. Chrétien defended her older age appointment at the time, telling reporters she brought lots of experience to the job.

On Tuesday, he remembered Kennedy, telling CBC News she was often "first at everything."

"She was a very elegant and sophisticated person and she was well known across the land and liked by everybody," he said. "She was a real great personality."