'We're all tied up in it:' Dance-opera Bearing aims to show we are all residential schools survivors

A new dance-opera production explores the ongoing legacy of the Indian residential school system by showing we are all survivors and need to heal together.

"We are all residential school survivors," according to Plains Cree performer Michael Greyeyes — a provocative statement that served as the starting point for the new dance-opera production Bearing.

"Maybe you weren't an abuser, maybe you specifically didn't suffer abuse, but we're all tied up in it," the actor, dancer and choreographer said ahead of the show's world premiere Thursday at Toronto's Luminato Festival.

Bearing is set in the present, not in the past, because Greyeyes hopes the new production will help all Canadians — Indigenous, nonindigenous or newcomer — understand the ongoing legacy of the Indian residential school system.

These schools were set up in the late 19th century by the Canadian government and run by churches in order to assimilate Indigenous children into mainstream society. In total, approximately 150,000 First Nations, Inuit and Métis children were forced to leave their families and communities to attend. The last residential school closed in 1996. 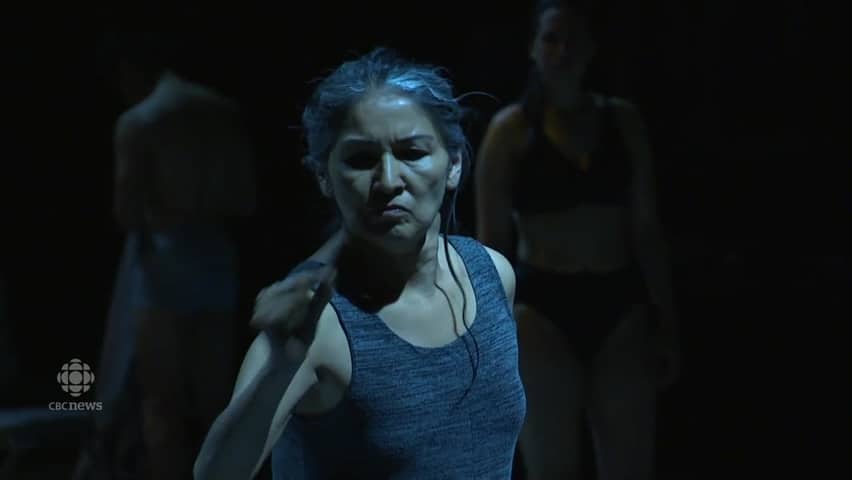 3 years ago
1:31
Scenes from a dress rehearsal for Bearing, which opens in Toronto this week 1:31

A Truth and Reconciliation Commission was established and heard testimony of physical, sexual and mental abuse from former students of these schools. In 2008, then prime minister Stephen Harper issued an official apology in Parliament.

While the legacy of residential schools has been addressed in previous works by Greyeyes, he has been working on developing Bearing for three years.

"It is woven throughout our country's present and, until we face it together, its long shadows will haunt and divide us," Greyeyes wrote of residential schools in a program note.

Greyeyes, 50, is from the Muskeg Lake First Nation in Saskatchewan and was the first Indigenous person accepted into the National Ballet School of Canada.

After a notable career as a dancer in New York, he turned to choreography and began exploring traditional Indigenous dance. He also founded his own company, Signal Theatre, in 2010 and maintains a busy acting career, including an upcoming role in TV's Fear the Walking Dead and another as Sitting Bull in Jessica Chastain's forthcoming film Woman Walks Ahead.

The production features nine dancers (including three who are Indigenous), Indigenous opera singer Marion Newman, a chorus and an orchestra of classical musicians performing pieces by J.S. Bach, Claude Vivier and a new composition and libretto by Indigenous composer Spy Dénommé-Welch and Catherine Magowan.

The story shows nonindigenous Canadians who are at first reluctant to delve into this difficult conversation, but eventually take on the experience and memories of clergy, lawyers, and residential school children.

It begins a process of understanding and healing with Indigenous people, whose families have been splintered from the residential school experience.

'We bring our ancestors into the room'

Both Greyeyes and his co-director Yvette Nolan had parents who were sent to residential schools.

"As Indigenous artists we bring our ancestors into the room, we do the work for our descendants, and so our experience as the children of residential school survivors has informed all of our work," Nolan said.

Nolan's father was an Irish immigrant who became a teacher at a residential school where her Algonquin mother was a student. Yvette herself was named after a nun.

She hopes the audience will gain "a deeper understanding of what the experience of residential school has meant to this country."

When asked to elaborate on his statement that we are all residential school survivors, Greyeyes said "People suffered horribly: personally, individually, families suffered, my family suffered, Yvette's family suffered. So I don't say it lightly, but I say it actually as a challenge because it's not just one community's history, it's our history."

"We have a responsibility for understanding how we're implicated in the colonial framework. It's only then that we can hope to figure it out, to move forward from it."

The world of dance has taken on the trauma of residential schools before: namely in the 2014 Royal Winnipeg Ballet production Going Home Star, which toured across Canada. However, none of the dancers nor the choreographer were Indigenous and the story was written by Joseph Boyden, whose claims of Indigenous heritage have been questioned.

Though Greyeyes said he appreciates the intention behind Going Home Star, he said the difference this time is that Indigenous artists are the main creators.

Bearing starts Thursday and runs until Saturday at the Joey and Toby Tanenbaum Opera Centre in Toronto as part of the Luminato festival. It is also slated to tour after its Toronto run.

Nigel Hunt is a longtime CBC News producer covering the arts beat. Previously, he served as a magazine writer and editor.