Banksy canvas of chimps in U.K. Parliament up for auction amid Brexit uncertainty

A massive Banksy canvas depicting chimpanzees in the U.K. Parliament is up for auction Thursday, coinciding with a wild political time in British politics.

Sotheby's hoping for record price of up to $3.3M Cdn

A massive Banksy canvas depicting chimpanzees in the U.K. Parliament could sell for a record sum at a London auction on Thursday, coinciding with a wild political time in British politics.

Sotheby's expects the painting could sell for up to £2 million ($3.3 million Cdn). The current record for an auctioned Banksy work was set in 2008 with the sale of Keep it Spotless for nearly $2.5 million Cdn.

The timing of the sale from a private collection is not coincidental as the U.K. approaches a new Brexit deadline at the end of the month and members of Parliament have been mired in unprecedented, bitter disputes about the future of the country.

Sotheby's Emma Baker, who is in charge of the auction featuring the work, told CBC News the current owner chose this timing.

"To us, it couldn't have come at a better moment," she said, noting the political turmoil.

Watch Baker explain the fortuitous timing of the Banksy auction: 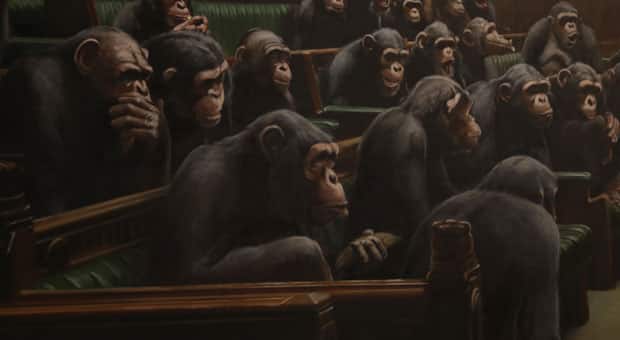 In promotional material, Sotheby's points out that the pre-auction exhibition is "just a mile away from the Palace of Westminster," the setting for the painting and a place where opposition parties have come together in an effort to stop Prime Minister Boris Johnson from taking the nation out of the European Union without a divorce deal.

Evan Beard, head of art finance at Bank of America's private bank division, told CBC News in an email that London auction sales have suffered recently due to Brexit uncertainty.

"The appearance of Banksy's withering view of Parliament feels more like a fist in the air by the auction house than the artist," he said.

Meanwhile, Banksy put out a rare post on Instagram saying  he has opened a shop in the London borough of Croydon.

The original work on canvas, which is about four metres wide, was created in 2009 with the name Question Time, but has since been reworked and retitled. Hanging lamps in the picture were snuffed out, creating a darker atmosphere. And an upturned banana held by one of the primates now points down. The painting was renamed Devolved Parliament this year.

Baker said Banksy reworked the canvas after its initial display in 2009. "He wasn't completely happy with it. Whether that's for political reasons [or] whether that's just because it wasn't quite finished, that's for the artist to answer…. But it's completely 100 per cent the same painting."

The elusive street artist Banksy has gained an international reputation for his sharp political commentary and dissident style, tackling topics including immigration and climate change. The artist has remained anonymous.

"If metaphors could speak, this one by Banksy would tell us a lot about the antagonistic cacophony that characterizes contemporary British politics," Prof. Arshin Adib-Moghaddam from the politics department at London's School of Oriental and African Studies said in an email.

The sale has garnered additional public attention following the surprise shredding of a Banksy artwork last year, which came just moments after the work sold at a Sotheby's auction in London. A shredder secretly implanted in the frame of the artwork destroyed half of the painting, leaving the slit-up art partially hanging outside the frame.

The Banksy stunt caught the art world by surprise and drew global coverage. The buyer decided to keep the work.

On his official Instagram account, Banksy indicated that he had intended to shred the entire work following the auction but the shredder malfunctioned.

The 2018 incident has left art lovers wondering if they should expect another stunt when the work goes under the hammer.

"The cliffhanger is, of course, is this painting itself going to self-destruct on 31 October 2019?" said Prof. Peter Osborne, director of the Centre for Research in Modern European Philosophy at Kingston University London.

"We're not expecting anything to happen on Thursday night," said Sotheby's Baker.

"We have totally taken as many precautions as possible …. We have taken the work out of its frame. We've X-rayed it. We've done everything, basically. We're not expecting anything to happen. But never say never with Banksy."

Alanna Petroff is a freelance reporter based in London. She has covered business, economic and international news for the past decade at outlets such as Reuters, CNN and the BBC.