Marc Brown's long-running kids show Arthur has caused a sensation with its season 22 premiere, with the revelation that recurring character in Elwood City is gay.

When Arthur creator Marc Brown returned home after dinner out with his wife Monday night in New York, he arrived to a flood of emails alerting him he was "blowing up" social media.

"I wondered what was happening. I started to get emails from family and friends about 'You're blowing up Twitter!'" Brown told CBC News on Tuesday afternoon.

Brown's long-running PBS kids' show — centred on the anthropomorphic aardvark of the title — had kicked off its 22nd season on Monday. The season premiere episode revolves around the wedding of Mr. Ratburn, whose impending nuptials Arthur and his friends attempt to derail in a case of mistaken identity.

The episode ends with a revelation: that their grade-school teacher is gay.

Both the inclusion of an LGBT character as well as the kids' "no big deal" reaction within the episode, titled "Mr. Ratburn and the Special Someone," drew praise from many on social media.

"I started to read some of the comments from people and it just made me feel great," Brown said.

Mr. Ratburn being gay is *my* Game of Thrones finale

Whether it's dealing with asthma, being in a single-parent family, welcoming an adopted sibling or figuring how to react when a grown-up is diagnosed with cancer or Alzheimer's, the show's goal has always been to reflect the reality of what kids are facing, said Brown, who also wrote and illustrated the Arthur books the animated series is based on.

"With Arthur, we have an opportunity to deal with all kinds of characters. We go into their lives and we want to see how they're connected with their families," Brown said, adding that Arthur characters are inspired by people he knew growing up (including a real-life schoolteacher who inspired Mr. Ratburn).

"Art reflects life. Life reflects art. And I think that kids need to see what's happening in the world."

It's not the first time the Arthur universe has incorporated LGBT relationships. In a 2005 episode of the spinoff series Postcards from Buster, which mixed animation with live-action footage, Arthur's bunny best friend visits family-run farms in Vermont. The parents of the kids featured are shown to be two lesbian couples.

At the time, the episode sparked major controversy, with public broadcaster PBS announcing it would not distribute the instalment to its stations and then-secretary of education Margaret Spellings complaining about public money being used to promote alternative lifestyles. Dozens of PBS affiliates elected to air the episode anyway. 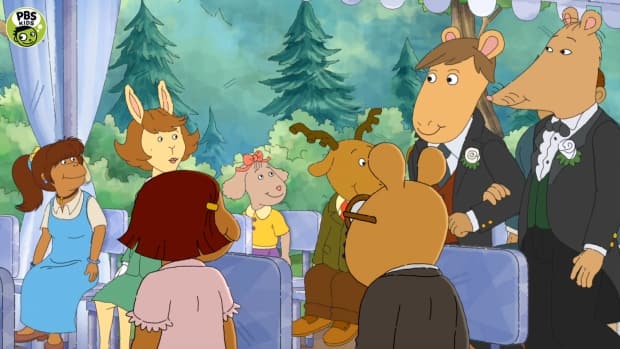 Why Arthur's creator wanted a gay wedding on the show

1 year ago
2:33
Arthur creator Marc Brown said he wanted to tell “an honest story for children and families.” 2:33

On Tuesday, PBS released a statement addressing the social media reaction to "Mr. Ratburn and the Special Someone."

"PBS KIDS programs are designed to reflect the diversity of communities across the nation. We believe it is important to represent the wide array of adults in the lives of children who look to PBS KIDS every day," the public broadcaster said in the statement.

One of the great things about television is how it can offer parents the opportunity to explore different kinds of stories with their children and then expand upon and discuss what they've seen, Brown said.

"I had a wonderful friend in Fred Rogers [of Mr. Rogers' Neighborhood] …. What he taught me was how to use television to be helpful to kids and families. That's kind of where I come from and that's what we try to do with the show."