Albert Schultz is taking a leave of absence as artistic director of the Toronto-based Soulpepper Theatre Company and says he will "vehemently" defend himself against allegations from four women who have accused him of sexual harassment.

Canadian actor Albert Schultz has announced he is taking a leave of absence as artistic director of the Toronto-based Soulpepper Theatre Company, after four women filed civil lawsuits Wednesday, accusing him of sexual battery and harassment of a sexual nature over a 13-year period.

On Wednesday evening, Schultz issued a statement that says he is stepping aside, effectively immediately, while the company's board of directors conducts an investigation.

"These claims make serious allegations against me which I do not take lightly. Over the coming time period, I intend to vehemently defend myself," Schultz said.

Soulpepper has also been named in the statements of claim of each lawsuit, which detail allegations of unwanted groping, harassment and sexual remarks in the workplace from 2000 to 2013.

"Albert is a serial sexual predator who…had well-developed methods for targeting actresses and luring them into situations that he considered optimal for sexually harassing and assaulting them," the lawsuits allege, adding that the methods were "facilitated by Soulpepper."

Late Wednesday afternoon, the theatre's board of directors released a statement that says it instructed Schultz to "step down from all his Soulpepper responsibilities" while the board investigates the allegations.

The allegations against Schultz were reported on Wednesday by CBC, as part of an ongoing investigation by The Fifth Estate, The National and The Current into sexual harassment in the entertainment industry.

In all, the women in the four statements of claim allege 30 separate incidents, many of them with specific locations and dates. Anna Maria Tremonti's interview with two of the complainants, actors Kristin Booth and Trish Fagan, about their experience on aired on CBC Radio's The Current on Thursday.

Sexual battery is a term used in civil lawsuits to describe unwanted touching of a sexual nature.

None of the allegations have been proven in court. Schultz and the Soulpepper board were served notice of the claims.

For some of the allegations, there were no witnesses and the women didn't tell anyone. In other instances, CBC News spoke with friends and family members who said they'd been told about the incidents at the time.

CBC News has also spoken with some of Schultz's colleagues at Soulpepper, who said they had never witnessed the director behave inappropriately. They said he is passionate and a maverick who "experiments" with actors to get the best performances out of them.

However, two of the theatre company's founding members, Ted Dykstra and Stuart Hughes, along with actor Michelle Monteith, released a statement saying they believe the plaintiffs and hope their support will send "a message to organizations everywhere: sexual harassment in the workplace cannot be tolerated. By anyone."

CBC News learned that four actors at Soulpepper had threatened to resign Thursday if Schultz did not leave his role as the company's artistic director. A fifth person, a director, planned to do the same.

In addition to the four women who have launched the civil suits, as part of a joint investigation by The National, The Current, and The Fifth Estate, CBC journalists have spoken with four other women who said they were disturbed by interactions of a sexualized nature with him.

Schultz, 54, is a member of the Order of Canada and may be best known to television audiences for his work on the CBC drama Street Legal, which aired between 1987 and 1994.

He's a founding member of Soulpepper, one of Canada's most successful theatre companies, which recently completed a critically acclaimed run off-Broadway in New York.

I felt him push his penis against me.- Patricia Fagan

Schultz is also an executive producer on Kim's Convenience, the play-turned-hit TV show that airs on CBC. The show is independently produced by Thunderbird Productions.

"In light of the serious allegations made public today, we expect Thunderbird will take the necessary actions to ensure a safe and respectful workplace and we have conveyed that to them," said Emma Bedard, a spokeswoman for CBC.
In a statement, Thunderbird spokeswoman Nicola Pender said the company "has a strict no tolerance policy against harassment of any kind and strives to provide a safe environment for all of our employees."
Pender said Schultz is not an employee of Thunderbird and is not active in the day-to-day production of  Kim's Convenience. "We are saddened to hear about the allegations and have the utmost respect for the complainants and due process."
The four women are individually asking for damages of up to $1.25 million from Schultz, as well as separate damages from the theatre company, to compensate for what they claim has been mental suffering, lost wages and injury to dignity and self-respect.
They only agreed to speak on record with the CBC once they had the protection that comes from filing a lawsuit in court.
"These are women [who] have been harassed at work," said Alexi Wood, the lawyer who filed the claim.
"There's a power imbalance that exists. Albert was their boss," she said. "He wields a huge amount of power, not just in Soulpepper, but in the theatre world in general."

The four women who filed lawsuits alleging they were harassed by Schultz are Booth, Fagan, Diana Bentley and Hannah Miller.

In her lawsuit's statement of claim, Fagan alleges Schultz fostered a climate of "mocking, belittling and bullying" at Soulpepper, often leaving her feeling "vulnerable and hunted."

During rehearsals for a Soulpepper production of Twelfth Night in 2000, when Fagan was 23, she claims Schultz, as director, inserted himself into a scene to demonstrate what he wanted his lead actor to do.

It was at that point, Fagan alleges, that "I felt him push his penis against me." She says she didn't react, assuming the contact was called for in the scene, although she felt "violated" by the "gratuitous demonstration."

Fagan claims that Schultz once slid his hand under her skirt and rubbed the underside of her thigh during a rehearsal. She also alleges Schultz flashed his penis at her seconds before she was getting ready to make her entrance on stage for a live performance. CBC spoke with that play's director, who said while he doesn't recall the incident, he believes Fagan's account, adding that Schultz was a joker who sometimes crossed the line.

In a rehearsal of a flirtatious scene in another play, Fagan alleges Schultz congratulated her performance by pretending to have an orgasm.

I was so humiliated. I didn't have a name for it at the time, but I did fall into a depression. I can see that now.- Patricia Fagan

"He...starts ripping Kleenex out of the box to show that he was having an orgasm, with the Kleenex being his ejaculate," she told CBC News. "That was to say, like, 'Well done, you were sexy in that scene.'"

Fagan started with Soulpepper fresh out of theatre school at 23, and worked on and off with the company until 2013. Now 41, she called her early days at the theatre company "devastating."

"I was so humiliated," Fagan said. "I didn't have a name for it at the time, but I did fall into a depression. I can see that now."

'I could feel his genitals against my body'

Award-winning actor Kristin Booth, 43, alleges she endured similar conduct in her work with Soulpepper. She said it started when she was 25 and, like Fagan, performing in the production of Twelfth Night in 2000.

During rehearsals for that play and another directed by Schultz five years later, Booth claims she endured unwanted hugs, kisses and touching, as well as sexually suggestive language.

"Albert's hugs were different," Booth said in an interview. "There were times in some of the hugs where I could feel his genitals against my body."

She claims he would also kiss her on the lips and talk about enjoying "how soft and full they were," as well as comment on her "milky white breasts in front of the other cast members."

During a 2005 production of Olympia, Booth alleges Schultz took advantage of his position as director to touch her inappropriately as she and the lead actor rehearsed an intimate scene. She claims Schultz pushed the actor aside and the director "proceeded to run his hands up my body."

Booth added that no other director has done that to her, not even on the set of the highly sexualized 2007 film Young People F--king, a performance for which she won a Genie Award.

Soulpepper turns to outside experts

The lawsuits filed in Ontario Superior Court allege Soulpepper either knew or was "willfully blind to the fact Albert was a sexual predator" and created a "poisonous work environment by not acting to curb the alleged behaviour."

There have been allegations in the past. Soulpepper revealed in October 2017 that it had severed ties with longtime guest artist and director Laszlo Marton over allegations of sexual harassment reported to the theatre company two years ago.

The company said at the time it was "dedicated to creating a safe place of belonging for artists, audiences, and aspirants."

In the wake of Marton's dismissal, Soulpepper sent an internal email to staff obtained by CBC, which vowed to "improve on the workplace dynamics" and promised that management's "doors continue to be open" to anyone wishing to speak with them.

In the memo, Soulpepper said an outside expert hired to review the company's anti-harassment policies had submitted her report and that she "did not have any significant concerns." The email also said managers were "not aware of any allegations of sexual harassment at Soulpepper" aside from those against Marton.

The email was co-signed by the theatre company's head of human resources, Sarah Farrell, and executive director Leslie Lester, who is also married to Schultz.

The theatre board's statement issued late Wednesday afternoon says Lester has agreed to take a voluntary leave of absence during the investigation.

"As a responsible organization, Soulpepper's priority is to create a workplace where all its employees feel safe," the statement says. "It therefore takes all allegations of harassment very seriously."

The statements of claim allege Soulpepper's harassment policy, instituted in March 2016, is flawed since it requires allegations of harassment be reported to the head of HR and/or Lester, "to whom cast members could not expect to report harassment, particularly sexual harassment" about her husband.

'He was the boss'

For years, the four women said that they did not speak out about the alleged harassment out of fear of reprisals or losing work since, as one of the statements said, Schultz had "such power and reach in the Canadian theatre world."

"There are so many actors and so few jobs. And so we just put up with it," Fagan said, a worry echoed by her colleague.

I've had a few people say, "You're so brave," and I don't see it that way, because I'm terrified.- Kristin Booth

Booth said it was a difficult decision for her to move forward with a lawsuit against Schultz, even though she hasn't worked with Soulpepper in 12 years and now concentrates on film and TV.

"I've had a few people say, 'You're so brave,' and I don't see it that way, because I'm terrified," Booth told CBC. 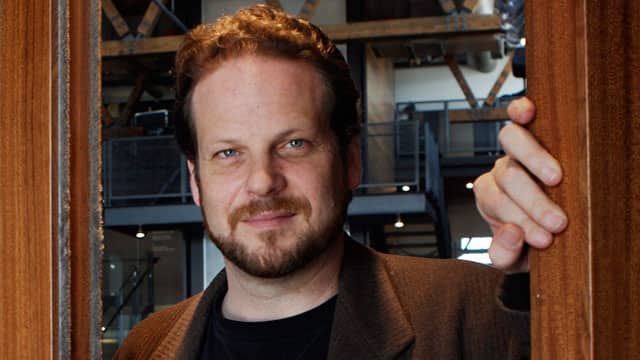 3 years ago
13:15
Canadian star Albert Schultz, known mostly for his work in theatre and television is the latest person to be accused of sexual harassment. Schultz is facing allegations from four women who say he subjected them to unwanted kissing, touching and sexualized language. Those accusations haven't been proven in court, however Schultz has now stepped away from his duties with the theatre company he created 13:15