A five-year-old piano prodigy from West Vancouver had his debut at New York's Carnegie Hall Sunday, playing Variations on a Russian Theme. 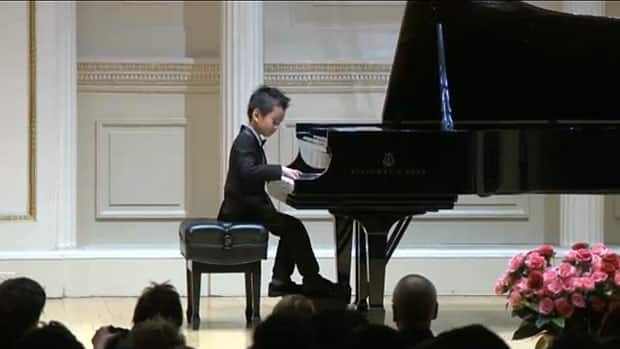 A five-year-old piano prodigy from West Vancouver had his debut at New York's Carnegie Hall Sunday, playing Variations on a Russian Theme.

"I did pretty good," he said after his performance, adding "I feel very excited and I want to come back again."

Wang won a place on the Carnegie Hall stage by submitting three videos of him playing. The American Protégé committee chose the piece they liked the best for his debut.

Ryan's mother, Iris Wang, says he has had piano lessons for just over a year, but spent hours playing on an electric keyboard before she sent him for formal training.

"Music is his passion. It's something ... he loves it and he's willing to do it and willing to learn. As a mom I will support him and follow his passion to be the best," Wang told CBC News after the performance.

"I'm so excited at seeing him at Carnegie Hall with such talented musicians. It's such an opportunity for him, for Ryan to play here and also watch other musicians play. He's very excited and I'm very excited too and so proud of him," she said.

The young pianist found New York to be fun, having been to the zoo and a park and a museum, but he was looking forward to going home so he could ride his bike.

Wang is also booked to make an appearance with the Shanghai Symphony Orchestra.