Disqualified former Chestermere Progressive Conservative candidate Jamie Lall was the subject of a restraining order issued eight years ago by a Calgary judge after a former girlfriend expressed fear for her safety due to alleged ongoing harassment and threats. 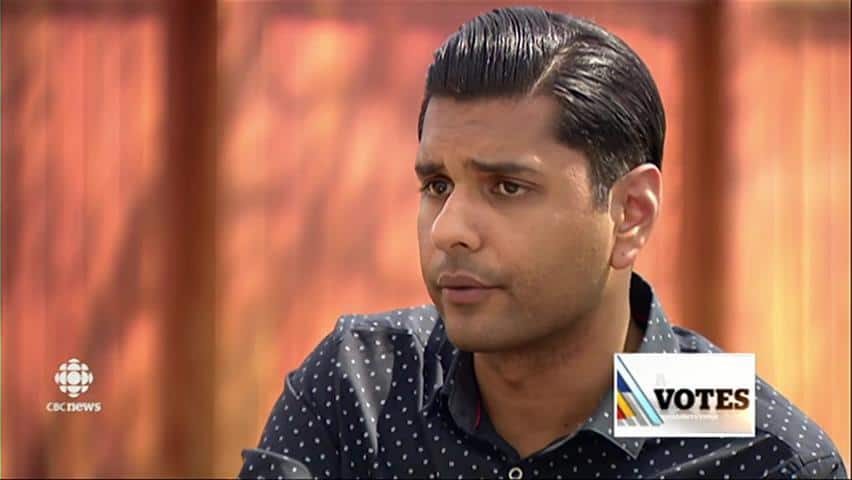 6 years ago
1:59
Jamie Lall says the order filed by a former girlfriend isn't why he was disqualified by the PCs 1:59

Disqualified former Chestermere Progressive Conservative candidate Jamie Lall was the subject of a restraining order issued eight years ago by a Calgary judge after a former girlfriend expressed fear for her safety due to alleged ongoing harassment and threats.

"He has not stopped harassing me since we have broken up and stopped talking in February 2007," Lall's ex-girlfriend alleged in a Nov. 6, 2007 restraining order application obtained exclusively by CBC News.

Court records also show Lall was charged with harassing phone calls in 2009 involving another young woman and was granted a conditional discharge.

The ex-girlfriend said in the document she sought the order, which was granted, against her then 22-year-old ex-boyfriend on the advice of her lawyer and Calgary police.

"He is extremely verbally abusive towards me and my family," she said. "I have changed my phone number since then and he got the number and still continues to call (about 30 times consecutively, at least once a week)."

The woman also claimed Lall had pleaded guilty to another minor charge. Court records show the charge was withdrawn after the restraining order was granted.

"Attached to that charge were conditions that he was not to contact me directly/indirectly or come to my residence or work. He has violated this and continues to do so," she alleged in her 2007 restraining order application.

"The respondent has threatened me and my family and has shown to be aggressive and short tempered," she said in the hand-printed complaint.

"He is incredibly unstable and I am scared because I have no idea what he wants or will do," she alleged. "We attend the university together and I am scared to be on campus. He has caused me, and continues to cause me, a great deal of emotional distress and it needs to stop."

None of the allegations contained in the restraining order application have been proven in court.

Lall has repeatedly said he doesn't know why he was disqualified. On Tuesday, PC Leader Jim Prentice told CBC News Lall had been told exactly why he had been disqualified by the party's provincial nomination committee.

"They made the decision they made for good reasons," Prentice said. "I am aware of what the reasons were and it was the right decision."

In an interview with CBC News, Lall admitted he and his former girlfriend had a bad relationship but he said that is in the past and they're now good friends.

Lall said he was never told by the PC party why he was disqualified but he said he told the party both in 2012, when he first ran in Calgary Buffalo, and most recently in Chestermere about the restraining order.

He said he also provided Gordon Bull, the private investigator hired by the party to vet candidates, the contact information for his former girlfriend.

Lall said his former girlfriend talked with Bull and assured him the matter was in the past.​

Lall told the CBC's John Archer he doesn't know why he was disqualified.

"If this was the reason they could have come out and said it and they didn't and I don't have documents pertaining to this," he said.

'We are diplomatically civil now'

Lall's former girlfriend told CBC News her issue with him is long over and "we are diplomatically civil now."

She confirmed Lall sought her permission to give Bull her contact information, and that Bull contacted her about the restraining order.

"I told him I am supportive of Jamie and have no current issues with what happened in the past," she said, adding that Bull told her, "the party just wanted to be sure that nothing embarrassing would come out and I assured him nothing would."

Lall was suddenly disqualified from running as the PC candidate in Chestermere-Rocky View on the eve of his nomination election. He said the party would not tell him why he had been disallowed and he claimed the lack of transparency had damaged his reputation.

In an interview with CBC News, Progressive Conservative party executive director Kelley Charlebois maintains Lall did not mention the restraining order and he claimed he told him exactly why he had been disqualified.

Charlebois said that when private investigator Gordon Bull asked Lall if there was anything in his background that might embarrass the party, he didn't mention the restraining order.

He said Bull, some weeks later, found the restraining order as part of the standard background checks the party does of all candidates.

"You know, I guess it is going to be his word against my word," Charlebois said.

"He can pretend all he likes. That is up to him. But I cannot express strongly enough how disappointed I am in this young man," Charlebois said.

Wildrose floor-crosser Bruce McAllister was subsequently appointed as the PC candidate in the riding. Lall is now running against McAllister as an independent.

Earlier Monday, Lall launched an all-out offensive against the Conservative party by providing first Metro newspapers, and subsequently CBC News, with a series of texts he exchanged with Charlebois and former justice minister Jonathan Denis.

In a text exchange in March with Denis, the former justice minister advised Lall not to speak with the man hired by the party to vet potential candidates. And he said Lall should "hire a lawyer."

"They're searching for a reason to (disqualify) you," Denis said in the text. "Buddy you are being set up. Any further communication is with a lawyer."

Charlebois, in a January text, told Lall the party does not want him as the candidate.

"You're kidding me right?" responded Lall, who runs a non-profit corporation in Calgary but grew up in Chestermere.

Under the restraining order, Lall was barred from "harassing, molesting, watching, following or otherwise interfering with or contacting (his ex-girlfriend) either directly or indirectly."