The host of CBC's Yukon Morning radio show in Whitehorse says she resigned shortly after making on-air remarks last week about the under-representation of Indigenous and Black voices on CBC.

The host of CBC's Yukon Morning radio show in Whitehorse resigned last week shortly after making on-air remarks about the under-representation of Indigenous and Black voices at CBC.

In a four-minute address to listeners at the end of her June 8 show, host Christine Genier said CBC's journalistic standards and practices (JSP) make it difficult for her to speak out as an Indigenous woman.

The JSP says CBC employees should not express personal opinions on controversial subjects on all CBC platforms, as well as on social media accounts because this "can undermine the credibility of CBC journalism and erode the trust of our audience."

Genier called on the public broadcaster to change.

"Not to be able to speak the truth is difficult," Genier said. "It contradicts and conflicts with the journalistic standards and practices of the CBC. This is painful. It makes the job difficult and it makes it ineffective.

"We get told that it takes time to move a ship ... but it is costing us bodies. And it's costing us lives."

Genier is a citizen of the Táän Kwách'än Council and a woman of the Wolf Clan descended from the Tagish Chän, coastal Tlingit, and European people. She joined CBC Yukon as the host of the new program last October.

In a Facebook message posted four days after her on-air comments, Genier said she quit CBC 15 minutes after making her remarks. 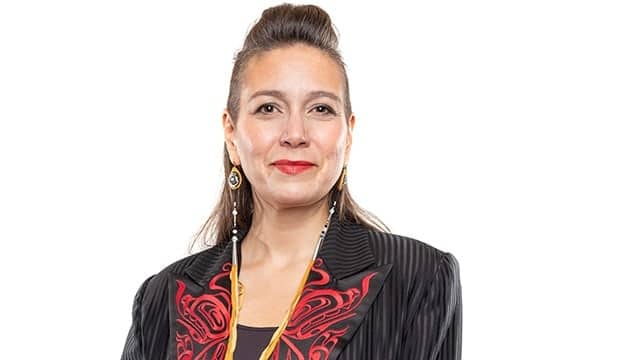 "They all assured me that my words would not cause my dismissal (I had already submitted my resignation!)," she wrote.

In her Facebook statement, Genier said that the CBC's JSP perpetuates systemic racism and "blocks our ability to bring the stories and language and culture to the programming."

She also wrote that she watched this system drive a young Indigenous reporter out of the Yukon newsroom in December, and that it was never addressed.

Reached by phone Monday, Genier said, "I'm not ready to make a statement … right now, but I am open to further conversation."

Genier 'will be missed,' says CBC

"Christine is a powerful storyteller who helped us contribute to the conversation in Whitehorse. We thank Christine for her time with CBC Yukon; she will be missed," he wrote.

"We are committed to change," he wrote.

"But the overriding objective is that the inside of CBC News mirrors the makeup of the country we serve. Only then can our storytelling truly reflect the many interests, sensitivities, beliefs and viewpoints found in Canada."

Genier's resignation came just days after CBC host Wendy Mesley was suspended from hosting after she said she used "a word that should never be used" during an editorial discussion about race.

Genier said she pitched several ideas to management for ways the CBC can improve, including hiring more Indigenous and Black journalists, and giving airtime to a public discussion about CBC's culpability in colonization and how it plans to change.

Fenlon said some of the measures CBC News, Current Affairs and Local Services is committing to include:

Genier encouraged people who've got in touch with her to instead contact CBC.

"We are out of time," she wrote. "And that is why I am going to echo back to the CBC the words that they have been saying to me all week: YOU are a leader. YOU have such a strong voice. YOU are so very important to the conversation."