XL Foods, the plant at the centre of a massive E. coli-related beef recall, says it has addressed all the safety issues and concerns about the facility raised by the Canadian Food Inspection Agency.

Union says workers could be back in a few days 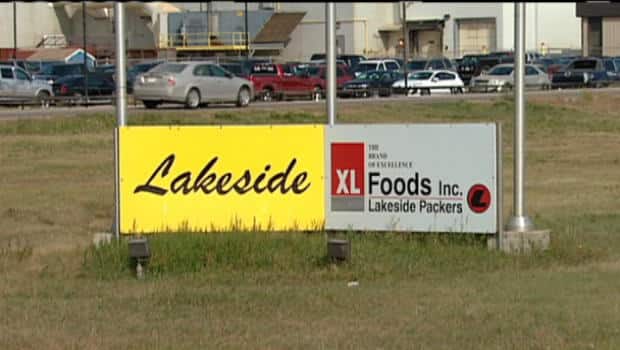 8 years agoVideo
1:58
Federal food inspectors were inside the plant at the centre of Canada's massive beef recall to check if several deficiencies have been addressed, but critics argue that even a passing grade may not be enough 1:58

XL Foods, the plant at the centre of a massive E. coli-related beef recall, says it has addressed all the safety issues and concerns raised by the Canadian Food Inspection Agency.

"The company has completed implementing corrective action requests issued by the CFIA following the findings of their investigation," XL Foods said in a statement.

"These efforts, in addition to the intensified and enhanced food safety protocols, will improve the process of our contamination prevention program," the statement said.

On Tuesday, the Canadian Food Inspection Agency began conducting a "detailed assessment" of the plant. Agency officials said they will check safety controls and determine if XL Foods has fixed the problems that were uncovered at the Brooks, Alta., plant by federal inspectors.

Meanwhile, the union representing workers at the XL Foods Inc. said it expects the 2,200 employees to be back on the job in a few days.

In a news release, Doug O'Halloran, president of United Food & Commercial Workers Local 401— which represents plant workers —  gave few additional specifics about the return to work. But O'Halloran, who will hold a news conference on Wednesday, said he feels nothing has been done to address the safety issues.

The CFIA has said the company didn't keep proper records. There was also a range of sanitation issues, such as employees not thoroughly washing their hands after touching raw meat.

Dr. Harpreet Kochhar, executive director of western operations for the CFIA, said inspectors will walk through the plant to "make sure the correction action plan has been implemented.

"At this point, there is no date or indication if the plant will be operational," Kochhar said.

Federal Agriculture Minister Gerry Ritz has said several times that the plant will not be allowed to re-open in any way before CFIA president George Da Pont signs off on it.

He said the pre-inspection is only the first of a multi-stage process XL Foods must go through before it will be allowed to resume operating and no date has been set for it to reopen.

The review follows a written request from XL Foods to have its licence reinstated. It was revoked in late September due to deficiencies in operations.

All of the XL Foods meat products continue to be under CFIA control.

E. coli was first detected at the Alberta plant on Sept. 4, but it took 12 days for the first of numerous public alerts to be issued.

The number of cases of E. coli in Canada linked to the strain from XL's contaminated product now sits at 11, with a case on Vancouver Island.

The B.C. Centre for Disease Control said Monday that a patient who tested positive two weeks ago has recovered from the illness and an investigation has been launched into the source of the contamination.

Based on all the information collected by the Public Health Agency of Canada, the other 10 cases involving the strain linked to products from XL Foods were found in Alberta, Newfoundland and Labrador, and Quebec.

On Monday, the recall on beef products expanded to Hong Kong.

The Hong Kong Centre for Food Safety has advised companies to stop selling and to recall what it describes as "a small portion" of beef from XL Foods that had made its way to local shops. The agency said imports have been suspended for XL products produced on or after Aug. 24.

Meanwhile, the growing recall has observers of Canada's beef industry concerned about the negative impact on Canadian beef products in the medium to long-term.

"Because we're dealing with XL Foods and they do trade with more than 20 countries around the world, the impact that this recall may have on the industry may be significant," said Sylvain Charlebois, associate dean of the College of Management and Economics at the University of Guelph.

Charlebois said the government did a reasonable job of catching the problem but said XL Foods has failed to communicate properly to consumers in Canada or overseas.

"We need a company that becomes transparent, that really is out there and showing compassion to the victims. And so we're dealing right now with a company without a face, without a personality and it's hurting not only XL Foods but the entire industry," Charlebois said.

But Charlebois said it is good news that countries like the U.S. and Hong Kong have targeted only products from XL Foods, rather than banning all Canadian beef products as they did in the mad cow crisis a decade ago.

"We're seeing countries being more strategic about food supplies, issuing pinpointed embargoes on companies not countries. So that's reassuring for the beef industry."

Danny LeRoy, chair of the economics department and co-ordinator of Agricultural Studies at the University of Lethbridge, said he does not believe this particular crisis will be anywhere near as devastating to Canadian trade as the mad cow outbreak.

"The impact is much less because only one plant is affected," he said. "However, for those individuals who are involved or producers who ship to that plant there are some negative impacts for them."