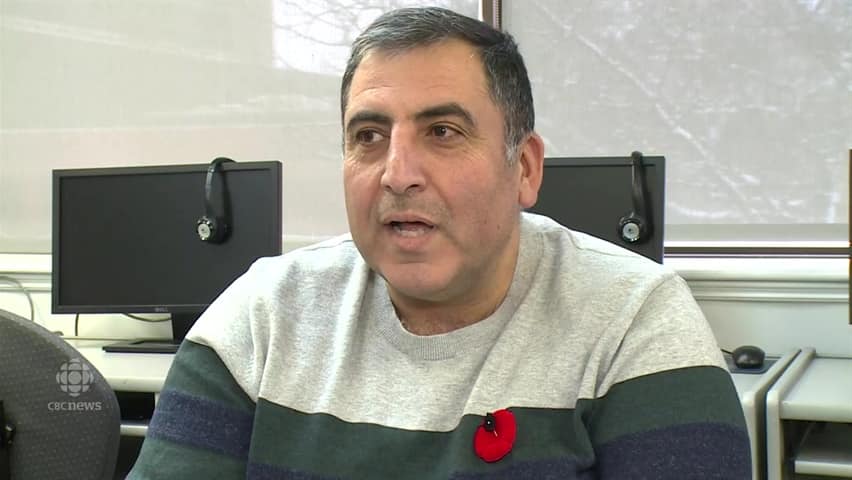 11 months ago
1:05
Canadian newcomers at the New Canadians' Centre of Excellence in Windsor expressed ire with recent comments made by former 'Coach's Corner' host Don Cherry. 1:05

In a brief rant, Cherry lodged criticism against new immigrants in Toronto and Mississauga, Ont., where he lives, claiming that they're not respecting Canada's veterans and dead soldiers by failing to openly wear a poppy.

In Windsor-Essex region, some residents were disappointed that Cherry stepped down from his role on Coach's Corner, adding that the 85-year-old likely could have phrased his arguments more eloquently.

"He's said some crazy things in his day, and that's why we love our Don Cherry," said Beth Rezoski, from Lakeshore.

"I mean, it's freedom of speech, he can have his opinions about things. That's why the veterans fought for us, so that we had freedom to say what we wanted. So it's a shame."

Rezoski added that "It's Don Cherry being Don Cherry."

Goldie Hawken, another Tecumseh resident, said she was disappointed to see Cherry fired.

"He's very passionate about the veterans and I think that's why he said what he said," Hawken said, adding that she wasn't insulted by Cherry's comments.

"It was a heartfelt statement that he made, and we know he kind of says things sometimes quickly before thinking."

'I want to be Canadian and I should care about that,' says Canadian newcomer

Some Canadian newcomers at the New Canadians' Centre of Excellence spoke with with CBC News before Cherry stepped down from Coach's Corner, expressing ire with Cherry's characterization.

Though they hadn't heard of Cherry and weren't aware of his comments, CBC News showed them the now infamous "You people" rant to get their reactions.

Shafi Lotfali is a Canadian permanent resident who immigrated to the country from Iran approximately five months ago.

He said he decided to wear a poppy this year because he learned about Canadian veterans' contributions to the First World War, Second World War and the Korean War.

"They were killed during the wars just because they [want peace] in the world and freedom for Canada," he said. "So I decided to wear this one because, in the future, I want to be Canadian and I should care about that."

Alae Alashkar said he immigrated to Canada from Syria in part to escape war and provide a better life for his family, adding that he hopes Cherry doesn't ever experience the same kind of difficulty.

Alashkar said he hopes for an end to all wars, not just the one in his country.

Members of the local hockey community are also divided over the decision for Cherry to step down.

"He's been one of the main reasons that I turn the TV on and watch Hockey Night in Canada on Saturday. He's been one of my favourite Canadians for all of the good things he's brought to the game of hockey."

Mahon said he believes that Cherry's comments were taken out of context, and that his words weren't meant to be hurtful. Instead, they were meant to be a statement about respecting veterans as a proud Canadian.

"He's just been a Canadian icon that I think is going to be surely missed."

'The network had no choice, they had to do it'

"I am not surprised," she said in reference to Cherry's firing.

"This world we live in today has no tolerance for anything that leans toward the politically incorrect. What he said definitely falls into that category."

She added that Cherry has been this way for years, but that his comments on Saturday were finally "the straw to break the camel's back."

"What he said was stupid, and the network had no choice, they had to do it."

Meanwhile, Craig Greenham, an assistant professor with the University of Windsor's kinesiology department, said he was "a little bit surprised" by the news, because Cherry had been able to "skate away with" a lot of things he's said in the past, adding that this time, Cherry's words caught up to him.

Greenham teaches a course about hockey in Canada, and plays recreational hockey himself.

As for Cherry's comments about immigrants, "I don't think he should have said it," Greenham said.

"Part of me wonders if Don really understood the magnitude of it."

Greenham said, ultimately, it's unfortunate that Don Cherry is going out the way that he is.

"It certainly hurts his legacy and his chances to get into the Hall of Fame. I wish it would have ended differently for Don, in all truth."

With files from Amy Dodge and Katerina Georgieva