A local teen is on a mission to warm the hearts of seniors across Windsor-Essex, by making and collecting 10,000 hand-made holiday greetings cards.

'There's so many seniors in the area who I'm sure would love a card,' says Emily Truman 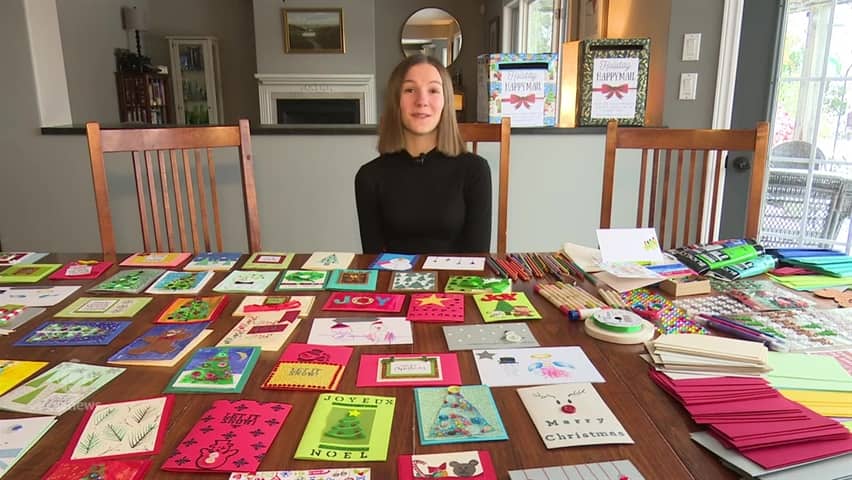 A local teen is on a mission to warm the hearts of seniors across Windsor-Essex, by making and collecting hand-made holiday greetings cards.

She also plans on distributing the cards to individuals living in nursing homes, or those who are homebound, throughout the region — and she's calling on members of the public for help.

It all began when Truman first decided to volunteer at a senior's home in the area nearly a year ago. She said she has met "so many amazing seniors" who she visits every week through her volunteer work.

"Some of them maybe have moved in from outside of Windsor and so don't have a ton of friends in the area or their friends aren't able to get out and about, so they don't receive too many visits," she said.

"And so I just think it's so important that, especially around the holidays, they get visitors, they get cards, know that they're special and that they're appreciated. So that's really what the holiday HappyMail initiative is all about."

According to Truman, that's also why she founded the Stay Gold Society, with the goal of bringing joy to elderly residents across Windsor-Essex.

'Local response has been amazing'

Truman started her greeting card project less than a month ago. She set up HappyMail boxes at local libraries and she's already received commitments from more than 20 schools and community groups to make cards.

Thanks to social media, Truman said she's even caught the attention of folks in Florida, New Jersey and England, who have been sending her cards as well.

"The local response has been amazing, but I'm really hoping more and more people will get involved, because there's so many seniors in the area who I'm sure would love a card and I'm really looking, not just for seniors in long-term care, but maybe even distributing cards through programs like Meals on Wheels," she said.

Even more ambitiously, Truman is hoping that down the road, she can make her initiative a Canada-wide project.

Inviting all to send in hand-made cards

In addition to calling on schools and community groups for help, Truman has also been spending most of her evenings making cards with her family and friends. She said she's lost count of how many cards she's made herself.

For those who'd like to send in a card, Truman said there are no guidelines in terms of content. She just asks that people write a kind, handwritten message on the inside of the card, leave the envelopes unsealed, the cards undated, as well as sign the cards with their first names.

There are HappyMail boxes set up at all Windsor Public Library locations until Dec. 8.

There are also eight boxes at Essex County Library branches in Amherstburg, Essex, Harrow, LaSalle, Leamington, Lakeshore, Tecumseh and Kingsville, where cards can be dropped off until Dec. 9.

Truman is also looking for volunteers to help her distribute the cards.

And she's not the only one in the region looking to spread some holiday joy to local seniors.

Ryan Jershy, owner of Home Instead Senior Care, said his organization launched its 10th annual 'Be a Santa to a Senior' program last week, inviting members of the public to sponsor a gift for a senior in a nursing home, or for anyone who might be living alone.

He said Truman's initiative is "fantastic," adding that he hopes his organization can help with the distribution of the cards if needed, since they'll be delivering gifts to homes throughout the county either way.

"Anything to brighten any senior up is fantastic. I think that's such a great thing. And for a young person to be involved and think of that, it's just a wonderful thing," Jershy said.

Jershy said 2018 was Home Instead's biggest year, with 1,000 sponsors. He said his organization is well on its way to surpass last year's numbers, having already reached 1,000 sponsors within a week's time.

According to Jershy, the number of sponsors has started to outnumber the seniors set to receive gifts. As a result, Jershy is asking for members of the public to reach out if they know of anyone who could benefit from a gift this time of year.

The kinds of sponsored gifts usually collected and delivered by Home Instead include basic items like blankets, quilts, hats, brand name Kleenex, scarves and chocolates.

"In the time we've done this, I've been able to be able to deliver these gifts for so many years and to see a senior light up when you know that's all they're gonna get. ... A lot of times they're just blown away that somebody actually took the time," he said.