Major upgrades to the WFCU Centre were finished within budget for the Memorial Cup. Building a media platform specifically for the hockey tournament was the biggest expense, coming in at $275,000. 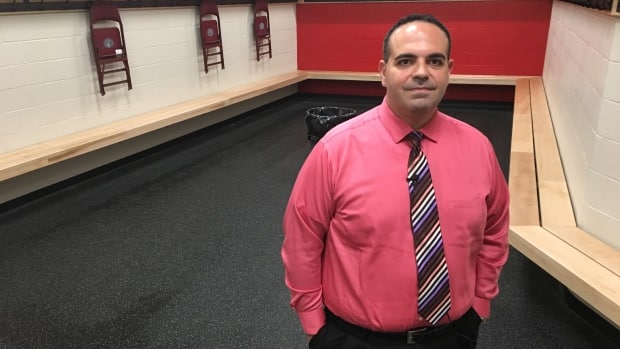 3 years ago
6:07
Major upgrades to the WFCU Centre stayed within the $990,000 budget and are ready to go for the Memorial Cup this week, say city officials. 6:07

Major upgrades to the WFCU Centre stayed within the $990,000 budget and are ready to go for the Memorial Cup this week, say city officials.

Building a media platform specifically for the hockey tournament was the biggest expense, coming in at $275,000. This will provide space for 150 journalists who are expected to attend.

An additional $220,000 was spent on new NHL-quality rink boards and glass.

"Everything is perfectly aligned. It's the new standard glass, which has give for the players. It absorbs a lot of the hits and impact for the players," said Ray Mensour, general manager of the WFCU Centre.

In addition to improving player safety, it helps with fan interaction because "people like it when all the glass moves."

Coun. Irek Kusmierczyk was the only politician to vote against spending the money on the upgrades. He thought the new media centre for journalists was a bit of an excessive cost.

"I just felt there were other priorities we needed to look at," he said of the near $1-million investment.

Despite spending the money, Kusmierczyk says he supports the Memorial Cup because the cost and financial risk to the city is quite low, compared to larger events.

The visiting teams will notice a shiny, new dressing room as well. It was built from scratch with a price tag of $175,000. Doors, shower heads and hooks are a bit higher because the Windsor Express basketball team will also be using it in the future.

After an event at the WFCU, it's common to hear the sound of car horns as hundreds of fans flock to their cars, creating a congested parking lot. Nearly $65,000 was spent with hopes of alleviating some of that pressure. Extra lanes were added near the VIP area and a new exit has been installed at the back of the general parking lot.

"With this extra egress and entrances it should help with traffic flow," said Mensour.

To prevent people from parking on the grass and provide more parking, the city is leasing surrounding land for $75,000. It's owned by London developer Shmuel Farhi.

"We expect to recover [that cost] from parking revenues received by those attending the Memorial Cup games," said Mayor Drew Dilkens in an email to CBC News.

In addition to the cost of a ticket, fans will have to pay a $10 parking fee per vehicle.

The city is trying to solve what it believes is a "parking shortage" at the WFCU Centre by looking at buying 15 acres from Farhi Holdings Corporation.

"We will be undertaking a phase two environmental study to determine whether or not we move forward," said Dilkens.