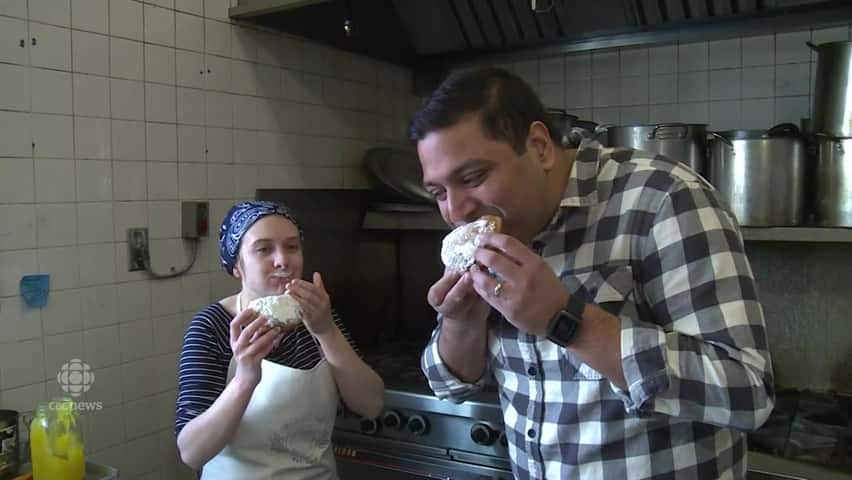 Traditionally, the Polish answer to the jelly doughnut is made from a rich dough that contains eggs, butter and sometimes milk, all ingredients that aren't vegan-friendly.

"People kept asking me, are you going to do paczki this year? After a dozen people asked me, I said 'maybe I will!'" explained Jordynne Ropat, owner of Plant Joy, a vegan doughnut company that debuted in 2018.

"Nobody should have to go without paczki on paczki day," she said. "That's just cruel."

Ropat's vegan paczki dough is made with flour, sugar, vegan margarine, cinnamon, baking powder, sea salt, yeast and water. It's proofed (allowed to rise) twice — after mixing and after being rolled and cut into the signature paczki shape.

When asked how the lack of egg — or egg substitutes — affects the final product, Ropat said that hasn't been an issue.

"I honestly think it's a little bit of magic because they turn out super-duper fluffy," she said. "I think anything with a yeast dough is going to have that fluffiness."

With a master's degree in neuroscience, Ropat was hoping to enter medical school before she started a full-time vegan doughnut business instead.

"When I applied ... after my undergraduate degree, I didn't get any interviews, so then I went on to grad school," she said. "Somewhere along that process, I think I kind of lost touch with the reason why I wanted to go to med school in the first place."

"Then one day, I was having a craving for doughnuts — and the rest is history," she said.

Ropat rents commercial kitchen space from Little Foot Foods on Tecumseh Road to produce her doughnuts, and sells them at places across the region.

She hopes to open a physical vegan doughnut shop one day.

Plant Joy's vegan paczki have to be ordered in advance — the last day to order is Thursday, Feb. 28.