The University of Windsor has privately apologized to a Black student and is reviewing discipline policies after an independent adjudicator found that senior administration mishandled the student's complaint about a fight on campus, a lengthy ordeal that has sparked outrage among students and faculty members on campus.

Afolabi was banned from campus by the university during the investigation, while the other student, later deemed to be the aggressor in the fight, was allowed to continue attending classes.

Deciding on whether anti-Black racism factored into Jordan Afolabi's treatment was beyond Elman's expertise, he wrote, but noted Afolabi was treated "in stark contrast" compared to the student he was defending himself against.

In his June report, Elman said that "may be attributable to a sincere concern for someone who has been physically injured...or it may be product of sub-conscious racial profiling and stereotyping."

Afolabi, currently enrolled in the university's law school, believes that the way senior administration treated him during and after the complaint process was motivated by race and that the experience has left him feeling that "the Black student community is not safe" on campus.

This week, associate vice-president of student experience Ryan Flannagan was asked to leave his position at the university - a position that oversaw the department charged with investigating Afolabi's complaint.

The University has not tied his departure to any specific incidents on campus.

"Ryan has been asked to leave his role in  order to support the University's efforts to rebuild trust and make the meaningful changes necessary to be safer, more inclusive, and more equitable," wrote a spokesperson for the University.

Flannagan declined to comment on Elman's decision when reached by CBC News while he was still with the university.

Afolabi's case is one of a series of incidents at the University of Windsor that have students and faculty demanding actions to address anti-Black racism on campus, including multiple professors using the N-word during courses, threats of violence against Black students by a fraternity, and a statement following George Floyd's murder that left students disappointed.

In Elman's decision, he cited issues with the Office of Student Experience.

In a response sent to CBC News Thursday, the university declined to further discuss this case, citing an on-going, third-party investigation.

It acknowledged that it needs to do work to "foster safer, more inclusive, welcoming, and anti-racist communities on our campus" and also outlined actions already underway to hire Black faculty members, offer grants for Black students and faculty, and "building a race-based data collection process."

A university investigation ultimately found Afolabi acted in self-defence during a fight with another student in February 2019.

University President Robert Gordon apologized for how Afolabi's complaint was handled in a private correspondence sent June 11, the day after Elman's decision was signed.

The apology for procedural errors was recommended by Elman.

"Professor Elman's decision points to a number of failings in how your complaint was handled and alerts us all to the serious problem and potential for racial profiling and anti-Black racism in decision making," wrote Gordon in a letter sent to Afolabi.

"In this respect I want to go beyond Professor Elman's recommendations and offer my apology for any aspect of your treatment by the University in which these factors may have played a role."

Afolabi said he believes anti-Black racism played a role in how his complaint was handled.

"I think it (being Black) had a lot more to do with it than I certainly wanted to believe," said Afolabi.

In a letter sent to University of Windsor president Robert Gordon and which was shared with CBC News, a group of faculty members and staff describe the way Afolabi's case was handled as "indicative of deeply rooted systemic racism that continues to pervade the University of Windsor."

On Feb. 14, 2019 Afolabi was running late for a class at the Odette Building on campus.

When he opened a door it struck another student. That student pushed Afolabi. Afolabi then threw punches at the other student, which the investigator hired by the University said was likely to protect further injuring his back.

While both students complained about the other for the same fight through the University of Windsor's Student Non-Academic Misconduct policy, the other student was free to use the campus as they liked.

Afolabi, however, was banned from campus days after meeting with academic integrity and student conduct officer Danieli Arbex.

Arbex has not responded to a request for comment from CBC News.

"The consequences of this were dramatic," wrote Elman in his decision. 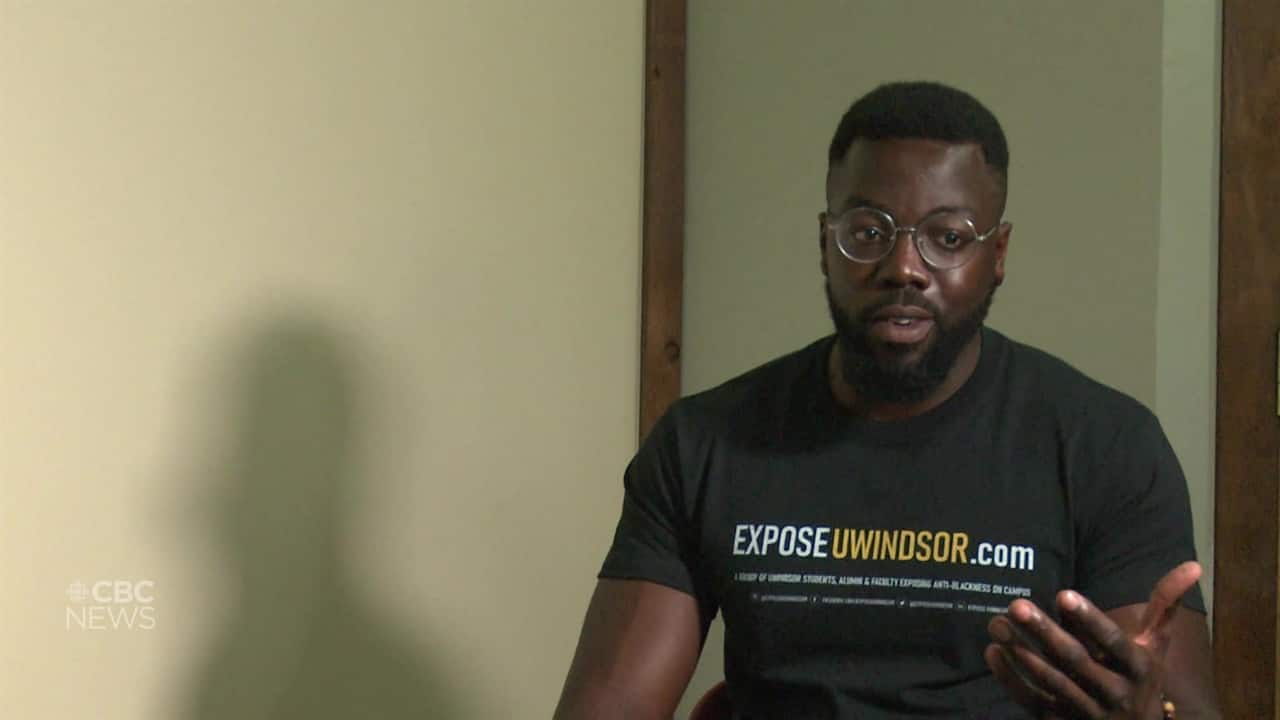 What Afolabi would like to see the university do next

2 months agoVideo
1:29
Jordan Afolabi believes there are actions the university could take now to help build a more inclusive campus. 1:29

"A few days later, my appendix ruptured and I was rushed to the hospital."

A decision, a complaint

In July, Afolabi and the other student were told through a letter from associate vice-president of student experience Ryan Flannagan that the complaint against Afolabi would be dismissed because the other student "had been the aggressor and that Mr. Afolabi's response was justified in the circumstances of the case," writes Elman in his decision.

Afolabi continued to pursue his complaint against the other student and how the university was handling it.

"I spoke of human rights violations. I spoke of procedural violations and breaches of confidentiality, major ethical issues that should elicit a serious response from any institution that's ethically grounded."

The campus bans lifted, he returned multiple times to the Office of Student Experience and Assumption Hall to get an update on his complaint.

During one visit, Afolabi was stopped by a receptionist at the University of Windsor in Assumption Hall, when he tried to get an update on his complaint in person.

The receptionist called police, alleging that "he's ratting out profs and other students" and that "he's already told me to calm down."

Afolabi said police were called, and that a trespass order was placed on him, preventing him from visiting Assumption Hall.

He continued to pursue his complaint against the other student, and in November was told by Flannagan that the university would not be taking further action.

Afolabi appealed the decision, which is when Elman took over as the adjudicator.

Elman is a former Dean of the University of Windsor's law school and also acts as the integrity commissioner for the City of Windsor.

Elman wrote the 227 days it took to issue a decision on the complaint filed by Afolabi "is an unacceptable amount of time," adding that this was a "uni-directional investigation" targeting Afolabi that "is not necessarily adequate when there are adversaries in an assault offering different versions of fact."

He also found that procedures were not followed properly because neither student was offered the proper form to fill out to document their complaint by the university.

Those forms would have been presented to the other student, allowing for each student to defend themselves against the others' claims, wrote Elman.

"It must be said that Mr. Afolabi sees the actions of the Dr. Arbex, Mr. Flannagan, and the OSE as being based primarily upon racial discrimination and bias against Black students," wrote Elman.

He wrote that it was not his expertise to determine if Afolabi being Black played a factor in his treatment.

"One cannot help but be concerned, however, when one examines, even in a cursory fashion, the Orders of Exclusion against Mr. Afolabi," wrote Elman, referring to the campus ban placed on Afolabi.

"This is in stark contrast to the deep concern expressed for (the other student). This deviation in response may be attributable to a sincere concern for someone who has been physically injured - our empathy naturally flows to them - or it may be product of sub-conscious racial profiling and stereotyping."

"It was validating when that came out. It was enraging, too," he said.

"I think that says a lot about what the differences are and what the factors are that are playing. And it's hard to not say race." 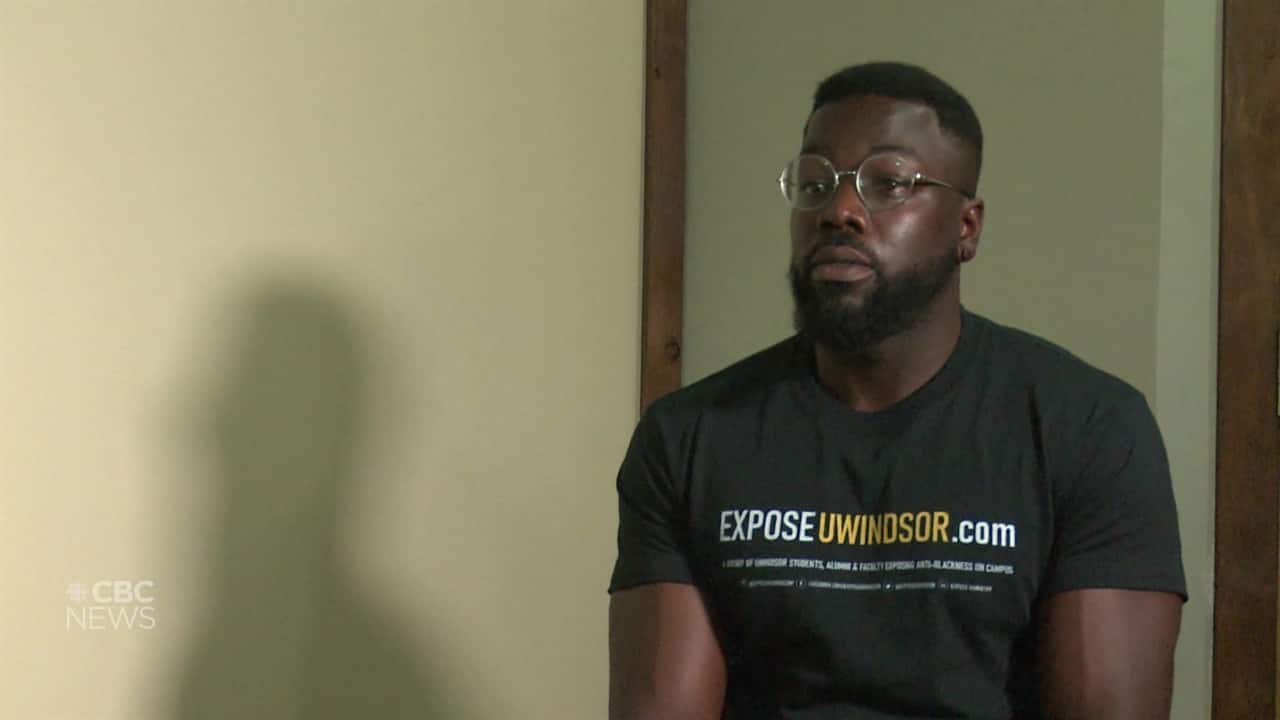 Why Afolabi is continuing his education at the university

2 months agoVideo
1:09
Jordan Afolabi says he wants to be part of the group that creates change on campus to help end anti-Black racism. 1:09

CBC News requested an interview with Robert Gordon, President of the University of Windsor, through Director of Public Affairs and Communications John Coleman.

"The University is unable to discuss this issue as it deals with confidential student matters, as well as associated personnel  issues."

"This process was meant to be confidential, and the University is respecting that process."

The University of Windsor has committed to a series of initiatives to address anti-Black racism on campus, including a dedicated anti-Black racism task force, that have been criticized by some students and faculty.

Dozens of student groups, like the Black Law Students Association Canada, University of Windsor Student Association, Shkawbewisag Student Law Society have all signed public letters of support for Afoliab over the course of the last two years.

A coalition of faculty members at the University of Windsor that goes by Researchers, Academics, Advocates of Colour for Equity in Solidarity (RAACES) signed a letter sent to Gordon calling the University's treatment of Afolabi "a blatant example of what anti-Black racism is: an assumption based on race that blackness equates with danger and is deserving of punishment."

"We view the University's treatment of Jordan Afolabi as an incident that has not happened in isolation. Rather, it is part of a pervasive pattern of institutional and deeply embedded systemic racism."

Afolabi said he wants to see the collection of racialized data, termination of several of those named in the report, including Arbex, as well as Gordon, and better representation at the senior administration levels.

The university said in its Thursday statement that it will:

Afolabi hopes to be part of the change on campus as he continues his studies as a law student.

"I started working to fix this place. I really did. I put my heart and soul into it for the past year," said Afolabi, who remembers the long nights during this process with family and friends by his side.

"It seemed to me a cowardly choice to dip to go to another school. It seemed to me, that's running away from our problems. And I really think it's important to confront your problems and run toward them if you can."