Researchers in Windsor are researching why Costa Rican yellow toads turn bright yellow to mate. And they're using 3D printed robo-toads to do it.

'It is a new era for this kind of research'

A research project at the University of Windsor is using 3D printed lookalikes to discover why a species of toad in Costa Rica turns bright yellow for a single day during its mating season.

The project started a decade ago when Dan Mennill and Stephanie Doucet witnessed a remarkable transformation while studying birds in Costa Rica.

During the first heavy rainfall following a long period of dry weather, they say many new animals emerge, including toads the pair said were the colour of a bright lemon.

"We watched them. It was amazing. Then we went and did our bird research and came back later in the day and they were all brown," said Mennill.

The quick change came as a surprise to the biologists and captured their interest. When they went back the next year, Doucet discovered the male toads change colour one day a year.

That's when their research erally began. They wanted to know if the toads turn colour to impress the females or if it's to communicate what sex they are.

At first they moulded Plasticine toads, but those models lacked realism. Then they tried molding clay, but that wasn't quite right either — enter Lincoln Savi, a University of Windsor Masters of Science student.

"In Costa Rica I got inspired," he explained. "They're like so cool, the yellow toads, that I kind of wanted to have one, but can't. So I made my own and once I had a super realistic model it was like, 'Hey we could actually do science with that.'"

It was a long process to get to the 3D printed model the biologists use today. Savi started by using photogrammetry, a technique that takes multiple photos of an object and through software creates a 3D model.

But that's hard to do with a live model, especially one that keeps hopping around.

"I only got 11 photos before he moved. I couldn't get any photos of his underside and he was in some leaves, so there was some geometry hidden by leaves," said Savi. 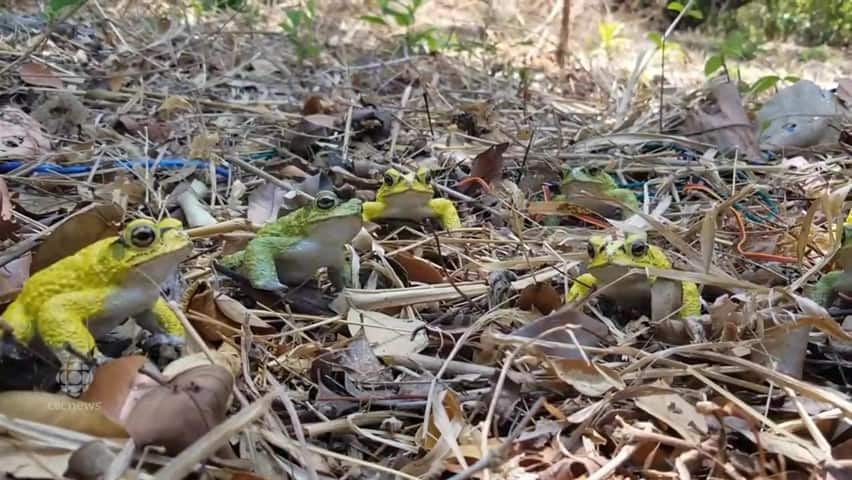 3-D robo-toads in the wild

He had to sculpt the remainder, which he said was probably harder than doing it from scratch.

Printing one toad takes eight hours. Sculpting it, another eight. Then at least five hours to paint. Finally, he adds the mechanics.

"The robo part was actually pretty easy," said Savi. "I used some programmable microprocessors and some servos and just made a simple program that chooses a random angle and makes the toad move there."

He added all of this work is to create colour and movement to stimulate real toads.

Waiting for the rain

PhD student Katrina Switzer is also part of the team and is in Costa Rica now, waiting for the heavy rainfall to start.

The toads are found only in the dry forests of Central America, where all the trees drop their leaves for six months of the year when there is no rain.

They burrow in the mud and re-emerge when the rain starts to fall over a six-month period.

Yellow toads only mate the night of the first big rain after the dry season, according to Mennill. That day varies between mid-April to early July.

"Then they emerge mate and go about their business for the rainy part of the year," he added.

These 3D printed toads are almost indistinguishable from the real thing and could take Swizter's PhD work to the next level. She plans to expose the bright yellow and brown toads to see how female toads react to them.

Mennill said the team's work is just one way 3D technology is bringing new opportunities to the study of wild animals.

"It is a new era for this kind of research."