On the birthday of his late mother, T.J. Laramie of Windsor, Ont. accomplished his lifelong dream of making it to the UFC. The 22-year-old's performance on the Aug. 11 edition of Dana White's Contender Series drew high praise from the UFC president, after Laramie earned a first-round TKO victory.

On the birthday of his late mother, T.J. Laramie of Windsor, Ont. accomplished the dream of every aspiring mixed martial artist.

The 22-year-old's performance on the Aug. 11 edition of Dana White's Contender Series drew high praise from the UFC president. Laramie earned a first-round TKO victory on the show after his opponent, Daniel Swain, could not start the second round due to a rib injury.

"It's awesome. I can finally say that I'm a UFC fighter, " said Laramie, speaking with CBC News five days after making it to the UFC.

The surprise ending to the fight — contested without friends and family in attendance at the UFC Apex in Las Vegas due to the COVID-19 pandemic — was preceded by excellent top control and a high output of ground strikes to the body by Laramie. The only adversity he faced during the fight occurred early on when Swain threw up two armbar attempts.

"He's a great submission artist but there was never a time in that fight where I felt like I was close to tapping or close to getting into locked into something that I couldn't get out of," he said. "I was letting him work ... and then once I passed [his guard], it was domination from that point."

Take a look at the final moments of the fight that earned Laramie a UFC contract:

Laramie's foray into the sport of mixed martial arts came at an early age, but not before experiencing the grief of losing not just one but three loved ones.

His older brother died suddenly in 2005 and his mother died of a drug overdose just two months later — when Laramie was just eight years old. He and his younger brother, fellow mixed martial artist Tony Laramie, moved in with his aunt, who subsequently died of cancer in 2009.

"I lost so many people that were immediate family," said Laramie. "And then the one person that actually takes me and my brother in, ended up losing her too."

Shortly thereafter, Laramie moved back in with his father — who introduced the then-11-year-old to the sport of mixed martial arts.

"I enjoyed watching it. I liked watching it. I've always been athletic and competitive, always looking for something to do," he said. "As soon as I started MMA, and the individual aspect of the sport, I thought — this is it for me."

Laramie's star grew quickly, winning his first professional fight in Japan back in March 2015 before becoming a local fan favourite by competing in front of crowds across Ontario and Quebec.

Before making it to the UFC, Laramie won two regional championships — in the Quebec-based TKO MMA promotion and Prospect Fighting Championships, based in southwestern Ontario.

There's no reason Laramie can't pull off similar success in the UFC, according to his head striking coach Kara Ro. The two have been training together for about three years — and for Ro, Laramie is Windsor's best shot at bringing his home city a UFC championship in the future.

With gyms shut due to the COVID-19 pandemic, most of Laramie's time spent training for the biggest fight of his life took place in Kara Ro's backyard. Take a look:

"He will go anywhere to train with the best and make sure he's working hard enough," said Ro, recalling his training sessions in Michigan, Ohio, Nevada and California.

"The one thing that's different about him that I've noticed is he will pick the biggest, toughest guy in every gym he walks into ... and he will say, 'Who's the best wrestler here?' And he will take him on."

According to Ro, that's a trait which many other athletes lack simply because they fear they'll be exposed by someone more talented in front of their gym peers.

"So [T.J.] is consistently on this growth path. He is the one who will get there because he's so well-rounded, he listens and he works his butt off."

WATCH: Speaking with the CBC's Sanjay Maru, Laramie shares his experience of fighting on the UFC's Contender Series and how it compared to his past career fights. 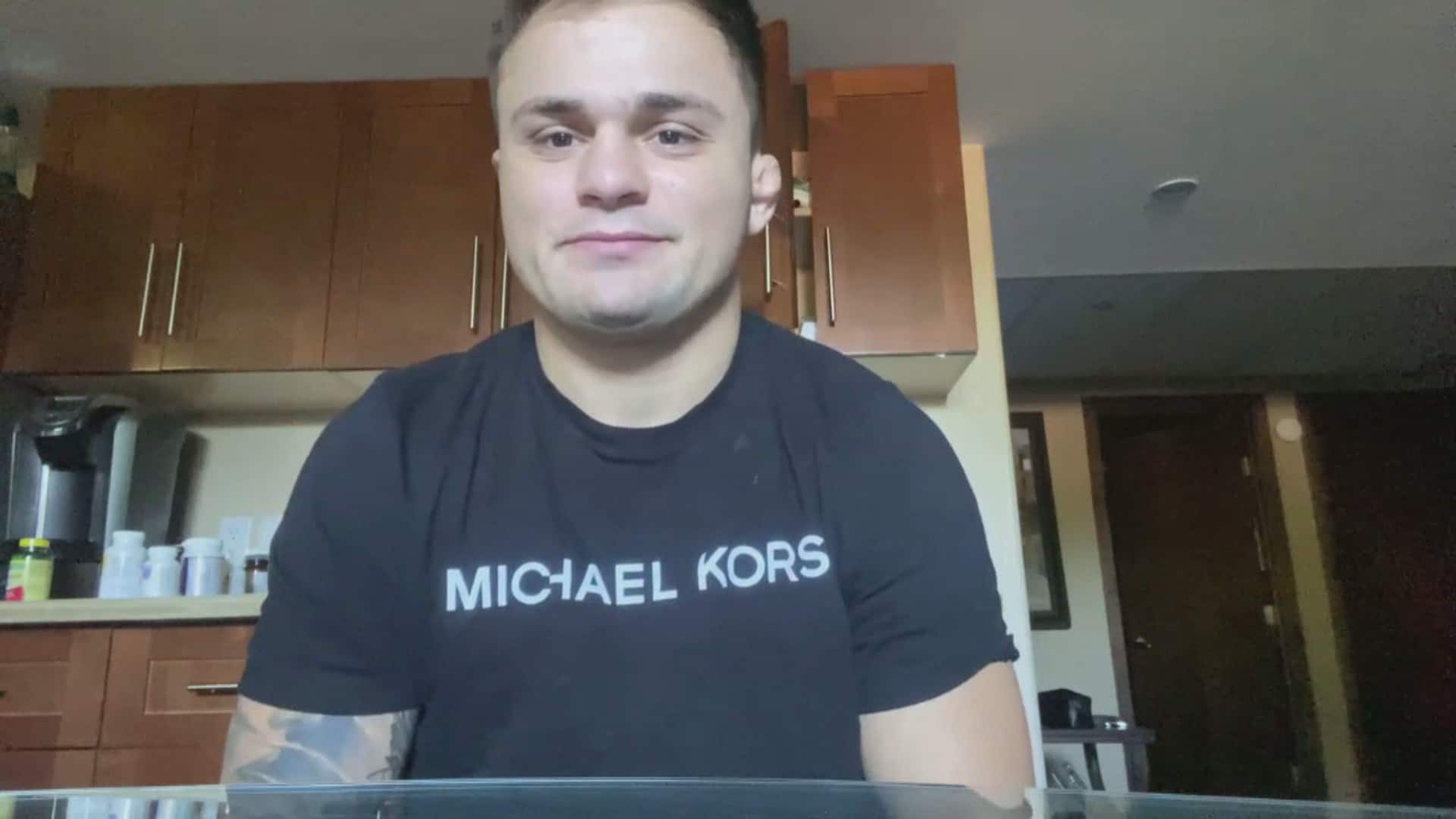 T.J. Laramie on his experience of fighting on the UFC's Contender Series

2 months ago
0:41
The 22-year-old Canadian featherweight speaks about his experience of fighting for a contract with the UFC during the COVID-19 pandemic. 0:41

Ro, who went undefeated as a professional boxer from 2002 to 2011, said not having fans in attendance for Laramie's Contender Series bout actually served to relieve some of the pressure. Speaking with CBC News, she compared her own experiences in competition.

"It's really tough to fight in front of your hometown crowd. So I had fought at Joe Louis [Arena]. I fought at The Palace, Cobo, all these places where all the Windsorites have come over and all my Detroit fans would come," she said.

"It's so stressful. And I know for T.J., he's fought in arenas and areas where it's been packed with his friends and family and it's a lot of pressure. I think we were both pretty excited about not having that pressure."

The next chapter begins

Of the five fighters who were all signed to the UFC last Tuesday, one of them has already been booked to fight on one of the promotion's events just 11 days later.

When asked if he'd like to get back into the cage in a similarly speedy fashion, the 22-year-old said he "could do with a little bit of time off."

He's looking to return to action around November or December and is also considering a possible move from featherweight (145-pounds) down to bantamweight (135). His natural walk-around weight, he said, is about 170 pounds.

Take a look at the moment when UFC president Dana White announced T.J. Laramie would be signed by the UFC:

If Laramie were to stay at featherweight, he added, there's one opponent he has in mind for his first fight on a major UFC event: breakout up-and-comer and fellow Contender Series alum Chase Hooper.

"He has a lot of recognition and hype right now ... I feel like also it's just a good way to get my name out there," he said. "I feel like that's a fight where two young prospects could get a spot on a nice pay-per-view card."

For now, Laramie is in celebration mode, spending time with his girlfriend in Winnipeg before flying back to Windsor for a few weeks. From there, he plans to fly back to Las Vegas — the site of his contract-winning performance — where most of his training will emanate.

Prior to Aug. 11, Laramie had been training in case he was called upon by the UFC to serve as a short-notice replacement for an injured fighter on one of its events. However, he's glad his first appearance in front of the UFC's audience happened on the Contender Series.

"I got so much more exposure through that. People really got to hear my story. It's crazy. It's really a dream come true."

I lost so many people that were immediate family ... And then the one person that actually takes me and my brother in, ended up losing her too.- T.J. Laramie on his personal hardships prior to discovering MMA

Looking ahead, Laramie's mindset has shifted to the new tools at his disposal now that he's been signed by MMA's flagship organization, including access to the UFC Performance Institute where he can work with health and nutrition experts.

He also plans on continuing his work as a barber whenever he returns to Windsor — something he's been doing since he was 16 years old.

"I still definitely enjoy cutting hair so I'm going to be doing it on the side, 100 per cent. When I get back to Windsor, I'll be cutting too. But obviously, I won't be in Windsor very often," he said. "For whenever I'm there and people still want their haircut, I'll be there."

Laramie's most recent victory improves his record to 12-3, having won seven of his last eight. His hope is to continue that success for years to come now that he's made it to the UFC — not just for his friends and family, but for the memory of his late mother.

"It's crazy how it all lined up — to actually get the contract on her birthday. You can say it's a coincidence, but it's just stuff like that makes me believe in being in the right place at the right time," an emotional Laramie said.

Hear much more of the conversation between the CBC's Sanjay Maru and newly-signed UFC fighter T.J. Laramie by tapping the player below: 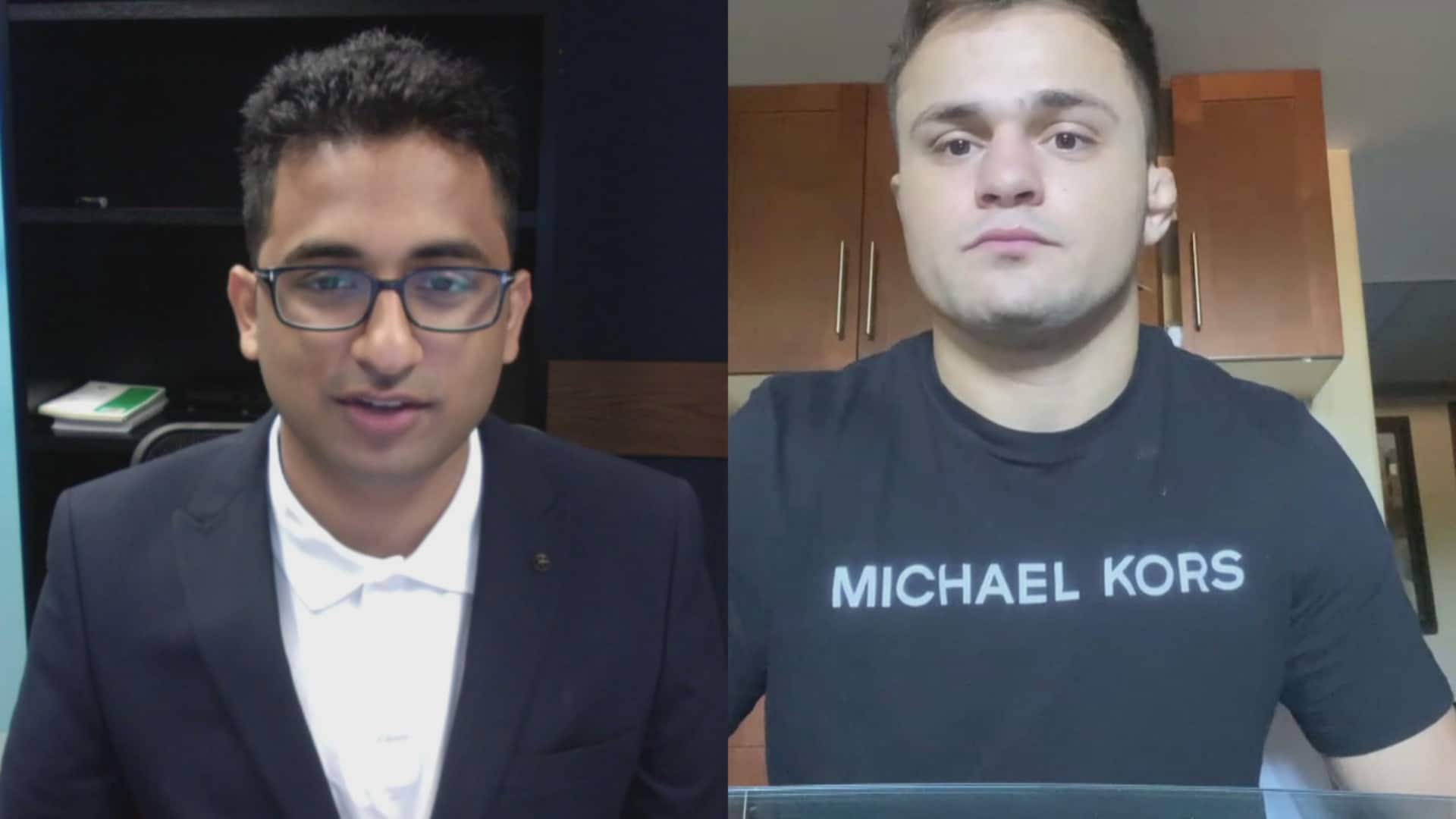 T.J. Laramie on his personal story and what's next as he begins his UFC journey

2 months ago
6:34
More from the conversation between the CBC's Sanjay Maru and UFC fighter T.J. Laramie, five days after being signed by MMA's flagship organization. 6:34