Nick Dyck is a 17-year-old with Down syndrome whose passion for the drums inspires a school. 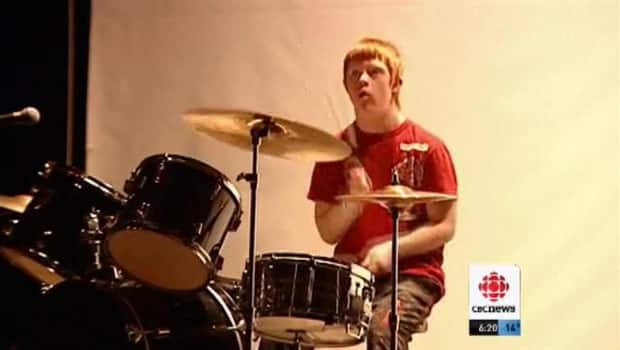 9 years agoVideo
1:56
Nick Dyck is a drummer with Down syndrome who inspires his high school. 1:56

Nick Dyck is a lot like other 17-year-old boys. He goes to school, hangs out with friends and loves hockey.

But Dyck has Down syndrome and doesn't talk much.

He's found other ways to express himself.  "I love the Toronto Maple Leafs," he says through an ipad which he uses to communicate.  He also plays the drums.

A rocker at heart, kids at Kingsville District high school, just south of Windsor, Ont., have taken to calling him Nikki Stix, a play on the name of Nikki Six, the drummer for Motely Crue.

Dyck's dad said his son has been playing since he could hold sticks - and has never looked back.

"He dreams it, he sleeps it, anytime we're in a vehicle, he'll air drum it," John Dyck said. "You've heard of people air guitaring — well, he air drums. Any music, anything that he can get a hold of. So it's very encouraging to see that. We're very blessed to have him in the family."

John Klassen is Dyck's friend. He said he loves watching his buddy play.

"Often times many kids, they find difficulty in finding things that they're good at, but, when someone who is autistic or is handicapped finds a talent like that, it's just so amazing," Klassen said. "It really touches my heart because I have a brother like that."

Klassen is a musician too, and sometimes helps Dyck with his skills. Although, Dyck playfully disagrees.

"I taught John everything he knows," Dyck said.

He wowed them at the school talent show last year.  Thursday, he was the final act in this year's show.

"I think he's a little better this year, a little more practiced, so I think we'll see Nikki Stix perform to the best this year," Mike Goodchild said before the show.

Moments later Nikki Stix took the stage and brought the house down.