At least 22 foreign adult entertainers in Windsor, Ont., will have to leave the country when their temporary foreign worker visas expire within the next 11 months. 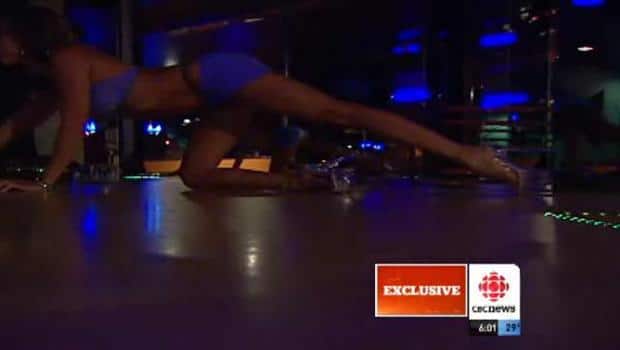 8 years ago
3:53
Changes to federal policy governing temporary foreign work visas means some strippers will soon have to leave Canada. 3:53

At least 22 foreign adult entertainers in Windsor, Ont., will have to leave the country when their temporary foreign worker visas expire within the next 11 months.

Rob Katzman, who owns and operates two adult entertainment clubs in Windsor, said the first of the 22 dancers will be forced to leave Canada in less than 30 days. Changes announced by Ottawa on July 4 now make it illegal for a an employer to hire any temporary foreign worker "linked to the sex trade" — and that includes strippers.

According to the media release at the time of the change, "the Government of Canada is taking action to protect vulnerable foreign workers from the risk of abuse and exploitation in sex trade related businesses."

Katzman, who is also the director of the Adult Entertainment Association of Canada, said "there is not one bit of empirical data that there is exploitation going on in our industry," especially not at his two clubs.

Katzman said his industry should not be lumped into the same category as massage parlours or agriculture, where it's been proven some workers are exploited.

In 2011, Katzman had 170 women dancing in his clubs and 30 of them were temporary foreign workers. The women come from Poland, Iceland, England, Estonia and Germany. All have proper paperwork and credentials, he said. All are aware of their rights, Katzman claimed.

"They know the law as well as we do," he said. "Believe me, they complain if the soap dispenser is near empty."

The Adult Entertainment Association of Canada also provides "incident report" forms on its website should a dancer feel the need to report something.

"They aren't the type of ladies who want to do anything but obey the laws," Katzman said.

"There are number of barriers workers come into the country with. They don’t know the language here, the law here or the human rights laws. They’re often so isolated from the rest of the community," she said.

Gilbert said many women are "tied to one employer" by the temporary foreign worker visas.

"No matter what that employer does, I’m tied to that individual and that puts me at risk for abuse and exploitation by unscrupulous and abusive employers and recruiters," Gilbert said.

According to the RCMP's 2010 report on human trafficking in Canada, "human trafficking for the purpose of sexual exploitation has been mostly associated with organized prostitution occurring discreetly behind fronts, like escort agencies and residential brothels."

It goes on to say "some victims of domestic human trafficking have been underage girls exploited through prostitution in exotic dance clubs and/or escort services."

One Icelandic dancer, who spoke to CBC Windsor on the condition of anonymity, said she owned two businesses back home. But when the economy went south, she headed to Canada to become a dancer.

"That's why I became a stripper," she said. "We're making good money. We're not stripping for alcohol or drugs."

Katzman said many of the women send money back home to family.

He has one woman whose mother previously danced for him. Katzman recruits his dancers through magazines and ads overseas. He interviews them using  Skype over the Internet.

"We want girls who come from nice families," he insisted. "We just don't have enough Canadian gals to fill the positions."

That led to one Toronto strip club owner to say he would start recruiting high school grads and college and university students looking for work.

"The adult industry has no intention to recruit in high schools. That's not the way we do business," he said. "I think that was a demonstration of his frustration of the situation."

The dancers are frustrated, too. Several that work for Katzman are locked into car loans, apartment leases and cell phone contracts. Some, who intended to renew their visas, have rented out their residences back home and can't force the tenant out when they return early.

The dancer from Iceland admitted there are some obstacles, but she said many of the women will overcome them.

"We've all saved our money," she said. "We all have loving family and friends back home."