Katelynn Thibert is worried about her son's development. He's been diagnosed with myoclonic-astatic seizures and is drug-resistant. He has to wait between six and nine months to get tests completed, meanwhile he has between 30 and 40 seizures a day.

Wait times for testing are between six and nine months

Dekson has myoclonic-astatic seizures and is drug-resistant, and with 30 to 40 seizures a day she thinks the seizures may be affecting his development. He still needs more testing done before they can figure out the next steps to help him — but she says the wait times are too long.

Dekson was born in November 2016 and developed normally until he was 19 months. When Thibert noticed he was falling down more than the average toddler, she took Dekson to the doctor. After some blood work, he was referred to a pediatric neurologist in September 2018.

"We didn't know if it was behavioural or neurological at that point," said Thibert.

The doctor determined he had epilepsy immediately and Dekson had a same-day EEG in a Windsor hospital. He was referred to the London Comprehensive Epilepsy Clinic, but the wait to get in was six months.

"I had to advocate by frequently calling London to get an appointment sooner, or a cancellation," said Thibert.

They were able to get an appointment in February, after four months of waiting. The doctor asked for another MRI (a nine-month wait) and a two-day EEG brain scan (a six-month wait). Thibert had been told the wait time for the EEG would be around four months.

"These wait times are astronomical," said Thibert. "And unnecessary. I think there is a flaw in the system, that a two-year-old with chronic medication-resistant daily seizures has to wait upwards of eight, nine months just for tests."

Ministry of Health and Long-Term Care spokesperson David Jensen said there are four priority levels for MRI scans that are assigned by a radiologist. Priority level 1 is considered to have the highest urgency, and scans are done immediately.

Priority level 3 wait times have gone from 43 days to 39 days recently, the email says, "with 60 per cent of cases completed within the wait time target of 10 days."

A day in the life of Dekson

Dekson wakes up around 8 a.m. each day — and the first thing he does is take his medicine. He also has his first seizure of the day.

Like every kid, Dekson spends his day playing, but the medication causes his balance to be poor and patience to be low. Every couple of hours, Dekson has a cluster of seizures, between two and 10. 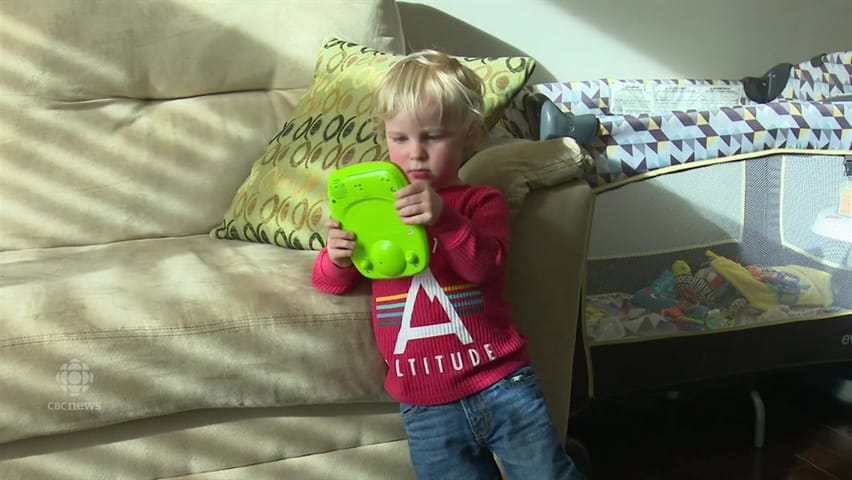 2 years ago
0:11
Katelynn Thibert's two-year-old son struggles daily with multiple seizures. He's drug-resistant and the next steps in treatment requires testing. Those wait times vary between six and nine months. Here he has a seizure while playing. 0:11

"He has drop seizures, so he loses muscle control 30 to 40 times a day," said Thibert, describing the seizures ranging from just Dekson's head dropping to his chest, or Dekson collapsing completely.

He also has nocturnal seizures as well, waking him up two or three times a night.

Epilepsy is a spectrum

Having seizures this often at a young age can be harmful to child development, said Rochelle Sorzano, an epilepsy educator with Epilepsy Southwestern Ontario. According to Sorzano, seizures are on a spectrum and affect children differently,

"It's quite hard for children with frequent seizures to have normal learning development, [or] sometimes even [normal] physical development," said Sorzano.

According to Sorzano, about 50 per cent of children with frequent seizures have learning challenges.

One third of those diagnosed with epilepsy are drug-resistant and have to seek other treatment options, liking following a ketogenic diet, having surgery or getting a Vagus Nerve Simulator.

Sorzano described the nerve simulator as a pacemaker for the brain.

"It will help interrupt any seizures that take place."

It all comes down to funding, Sorzano said about long wait times — but having a good health team in place can help.

For now, Thibert is going to see if their London doctor will sign off on allowing them to seek treatment in the U.S., the doctor will only do that if they believe that if Dekson doesn't receive testing soon, it would be damaging to him.

It's a costly road — Thibert said just to have a consultation is about $250.

"That's meeting with a similar specialist and it doesn't cover the costs of any of the tests that may be required to find out more about epilepsy that he has," said Thibert.

Jensen, the spokesperson from the Ministry of Health and Long-Term Care, said Ontario residents can qualify for full funding of out-of-country medical services provided they meet a number of requirements.

There must be a request for prior approval submitted by an Ontario physician on behalf of the patient, the email reads.

The medical service must also either be unavailable in Ontario, or the patient needs to receive it to avoid delay, which "would result in death or medically significant irreversible tissue damage."