'Accountability and transparency are very important in a situation like this': criminal lawyer Jake Shen

As CBC News first reported Thursday morning, several confidential sources confirm to CBC News, that three units — plus Deputy Chief Brad Hill — responded to a 911 hang up call to Frederick's Windsor residence the morning of Nov. 12. It was a domestic disturbance call.  ​A screenshot of the Windsor Police Service Media Portal puts the time at 11:29 a.m. Frederick and his wife Simone are the only people who normally live in the home.

Chief Frederick informed high-ranking officers and senior administration about the incident the following day during their normal morning meeting.

The CBC investigation raised questions about how the police handled it and now the mayor's office is explaining.

In an email, Windsor Mayor Drew Dilkens, who is also the chair of the Windsor Police Services Board, said responding officers determined the call to the Chief's residence was "not of a criminal nature" and that the board requested the Commissioner of the OPP to undertake a review of the incident nine days later (Nov. 21, 2018).

Dilkens added the OPP's report on the matter was submitted to the Windsor Police Services Board on Jan. 9, 2019.

"In their report, the Ontario Provincial Police concluded that all involved Windsor Police Service members, both uniform and civilian, responded in an appropriate, proper and transparent manner and followed established policies," he said.

CBC initially questioned the Chief during a Dec. 17, 2018 interview at Windsor police headquarters.

Q: "CBC News has been told by several sources that Windsor police responded to a 911 call from your home November 12. Can you tell us what happened?" 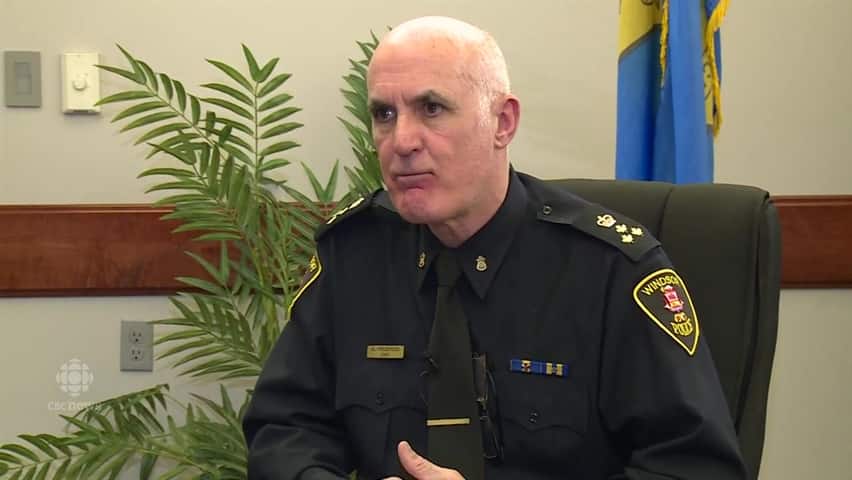 2 years ago
2:16
Police chief Al Frederick responds to questions about a 911 domestic disturbance call to his home. 2:16

A Freedom of Information request — seeking additional information on the 911 call — was made by CBC News to the Windsor Police Service and was denied, citing "an unjustified invasion of personal privacy."

After turning down a follow-up in-person interview request with CBC News, the Windsor Police Service refused to answer questions via email about the circumstances surrounding the investigation and how it was determined if charges were warranted. A search of Provincial and Superior Court records found no indication of charges being laid.

Lawyer Asha James, a partner at Julian Falconer and Associates and a graduate of the law school at the University of Windsor, says the initial response by police is troubling.

"It's concerning because now I want to understand what the scope of the investigation was," said James. "What specifically did they do? What statements were provided?"

CBC News has been unable to determine what led to the 911 call or who placed it.

Criminal lawyer Jake Shen, a former Toronto police officer, says the response from Frederick and the police service is a matter of public concern.

"The chief is not a private individual," Shen said. "He's a public figure and he takes on a leadership role. He is the person that holds a lot of power and responsibility. So accountability and transparency are very important in a situation like this. That is why the public needs to know whether the chief exercised his power or authority in a way that actually hindered or suppressed the investigation."

Shen says the situation shows a "glaring conflict of interest."

"Because you're asking police officers to investigate their highest ranking commanding officer. That is very difficult and even intimidating for any officers to conduct such an investigation," he said.

"You know, I really want to know what steps were taken and how thorough of an investigation was conducted that resulted in no charges either against the chief of police or his wife," James told CBC News.

"You want to ensure that there is no appearance of bias, that because it was the chief of police he didn't receive any special treatment," she said. "So for public confidence in the policing system you'd want to ensure that it's done by an outside agency."

Thursday afternoon, CBC News was informed via email by Windsor Mayor Drew Dilkens that the OPP was called in to investigate on Nov. 21, 2018. Dilkens declined an interview request with CBC News but did speak to other local media.

OCPC has power to investigate

CBC News sought clarification from the Ministry of the Attorney General about who would be responsible for investigating an incident involving a municipal police chief and was directed to the Ministry of Community Safety and Correctional Services and then the Ontario Civilian Police Commission (OCPC).

In an email, a spokesperson for the OCPC cited the Police Services Act, section 25, which states the OCPC may, under certain circumstances, investigate "the conduct or the performance of duties of...a municipal chief of police."

Frederick has served as the police chief since 2011, when he was initially named to the position on an interim basis. Shortly after, he announced Project Accountability in response to the police department facing allegations of police misconduct and a lawsuit. It also failed to report four serious injuries to the province's Special Investigations Unit under the watch of former chief Gary Smith, who abruptly retired amid the turmoil.