A massive three-alarm fire has been burning for two hours on Wyandotte Street E. and it has firefighters calling for people to stay inside and the Ontario Ministry of Environment monitoring water runoff and air quality.

Residents in the neighbourhood of the 800 block of Wyandotte Street E. are being told to close windows 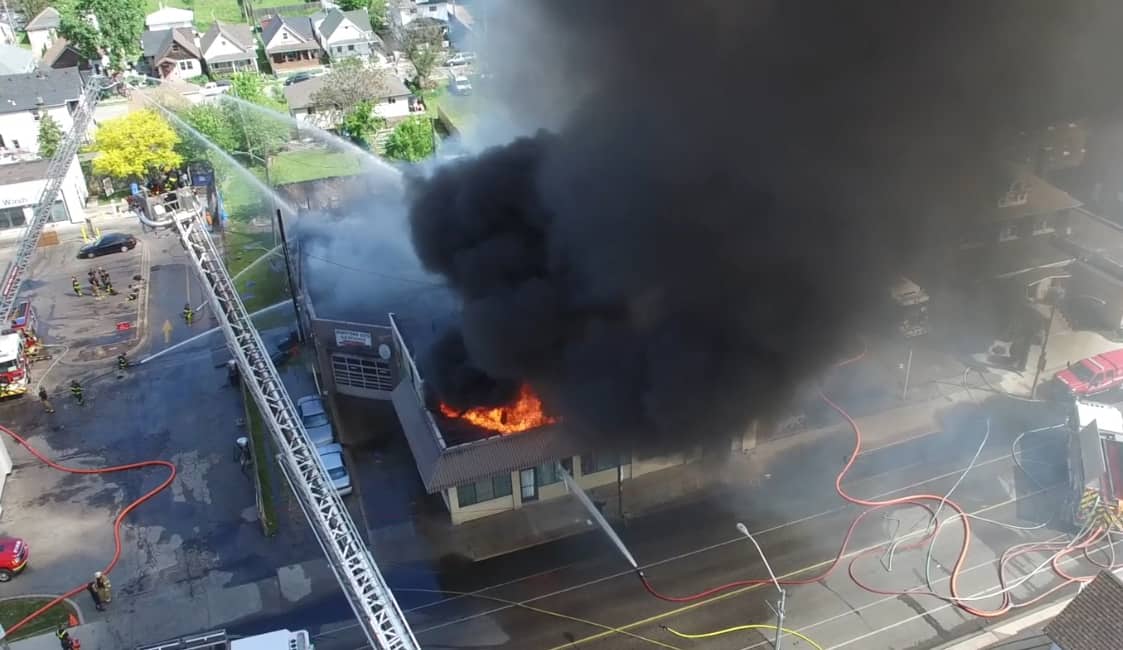 A massive three-alarm fire at a restaurant and auto shop in Windsor, Ont., that started burning at 8:05 a.m. Victoria Day, forced firefighters to order people to stay inside and had the Ontario Ministry of Environment monitoring water runoff and air quality.

Fire broke out at  840 Wyandotte Street E. at 8:05 a.m. Monday. While the call originally came in as a report of fire at Le Chef Restaurant, fire officials said late Monday the fire started at Downtown Auto Service next door. The two businesses are side by side in the same structure at 840 Wyandotte Street E.

No cause is known. The Office of the Fire Marshal will investigate.

The fire closed one of Windsor's busiest east-west arteries and residents were told to close their windows and stay indoors due to heavy smoke.

Wyandotte Street E. and Brant Street, one block north, were closed between Parent and Marentette avenues. Officials began opening roads to traffic at about 3 p.m.

More than 40 firefighters fought the fire, eventually using three aerial trucks to attack the flames from above. The trucks were strategically placed on three sides of the building.

"I'm sure they're getting tired. They've been at it for a while," Windsor Fire and Rescue fire prevention officer John Lee said at about noon Monday. The fire was said to be under control at about 12:30 p.m.

Joey Beatz of Drone Fly Tours shared aerial footage of the fire exclusively with CBC Windsor. You can watch it in the player below. 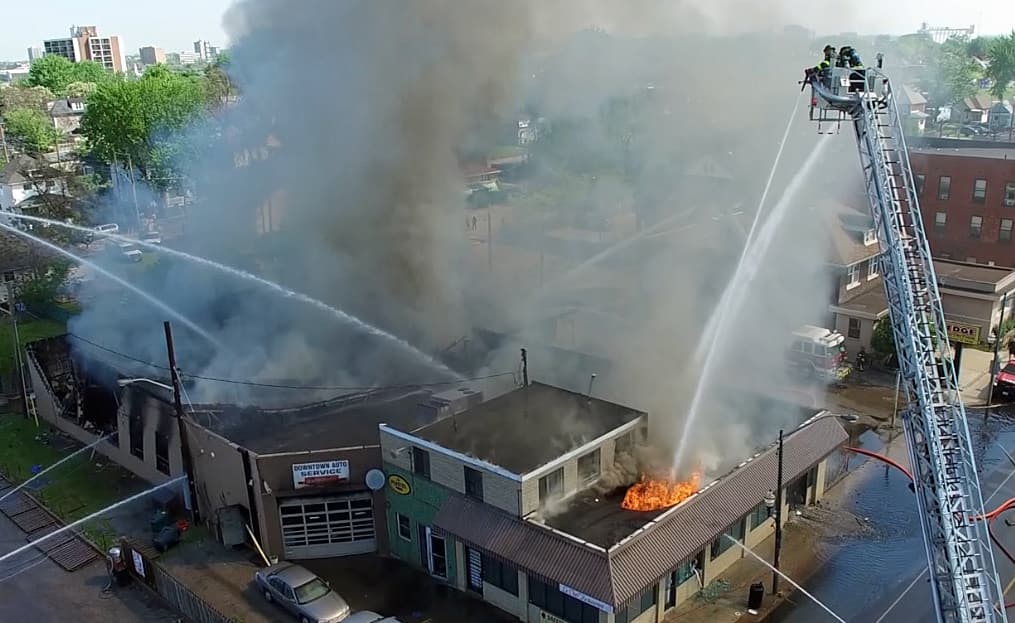 Wyandotte Street fire from above

Just before 10 a.m., the west wall of Downtown Auto Service collapsed. Minutes later, flames could still be seen inside the restaurant.

"It's going to be difficult to investigate this fire, as well, due to the extent of the damage," Lee said. "We have roof collapse and a structure collapse in the west wall. We're going to be looking at tapes. It's going to be a long process."

Windsor Fire and Rescue reported explosions as they fought the fire. Officials say they were likely caused by exploding tires and aerosol cans in the auto shop.

"Any compressed cylinder, once exposed to heat is going to [pop]," Lee said.

Enwin, the local utilities company, reported at about 11 a.m. that the fire knocked power out in a three-block radius due to wires damaged during the fire.

Windsor Fire and Rescue had a crew "keeping things cool" at the Petro Canada station next door, Lee said.

No injuries were reported and no evacuations were ordered.

Smoke could be seen from as far away as west Windsor and Highway 401, east of neighbouring municipalities Lakeshore and Tecumseh.

Officials said a tarred roof was likely the cause of the thick, black smoke.

While police and fire officials ordered people to stay inside, several people gathered at a church across the street, where they were taking photos.

Windsor resident Megan Ball told CBC Windsor through Facebook that "smoke is noticeable further south at Tecumseh and Walker [roads], as well. Have closed out windows as it is irritating to eyes and throat."

A column of thick black smoke and flames shot through the roof of Le Chef Restaurant minutes after firefighters arrived.

They gained control of the fire at about 12:30 p.m., more than four hours after it started.

CBC's Dale Molnar shot this video of the scene.

Just before 10 a.m., an outside wall collapsed. Windsor Fire and Rescue captured a photo it.

Trish Kapsalis took this photo from an alley near the scene of the fire and shared it with us on Facebook.