A lot of comedy is performed in the bar scene — and being just 15, Louis's parents have to be there with him, which can be a little awkward — especially when the jokes get more risque.

'It's a lot easier to understand something when you're laughing at it,' says trans comedian 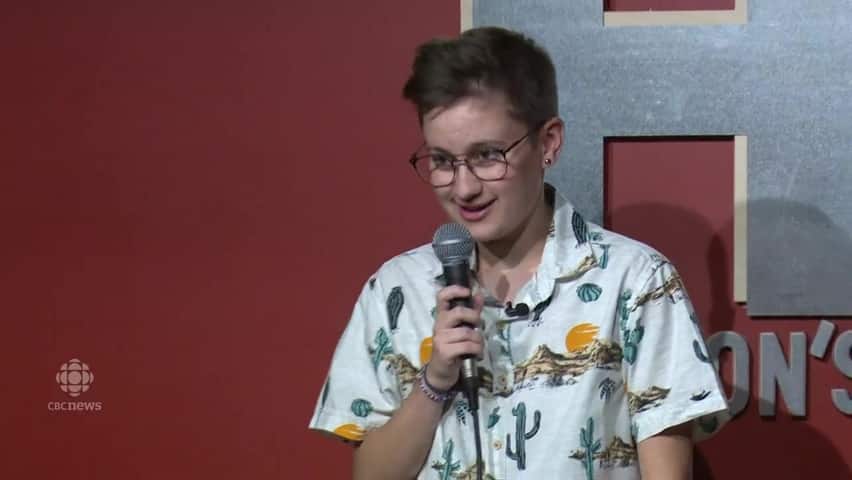 Louis Brady recalls coming out to his parents

11 months ago
0:53
Fifteen-year-old comedian Louis Brady uses comedy to get people to understand some of the struggles he's gone through. 0:53

"My name is Louis Brady and I happen to be a transgender gay comedian, which is pretty crazy."

The 15-year-old from Belle River, Ont. takes the stage in a dimly lit basement of a bar on Ottawa Street in Windsor, Ont. for a comedy show — something he's been doing since February.

Louis isn't shy to share some of the difficult parts of his life, including when he told his parents he's a guy. It's one of the jokes that gets the biggest laugh during his set. 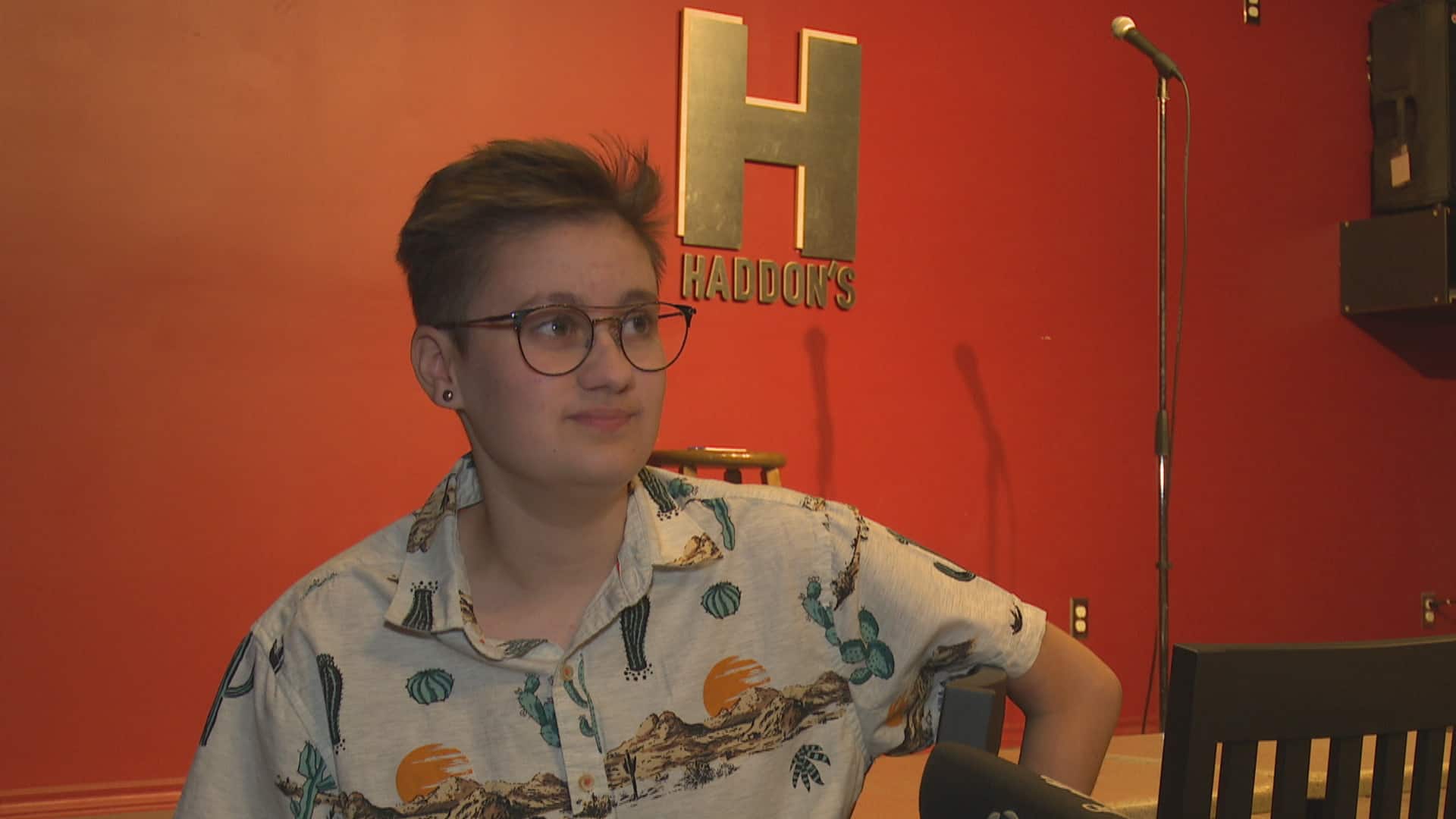 Louis Brady on being trans

11 months ago
0:48
Comedian Louis Brady says it's difficult being transgender, but explains that it's easier when his audience laugh along with him. 0:48

As much as he makes light of his life, it's been a tough few years. Louis says getting on stage and having people laugh with him makes it a little easier.

"I'll say 'I'm transgender and gay,' and then everyone will go silent and then I'll say 'Why did no one clap for me?' and that gets them started," said Louis.

A lot of comedy is performed in the bar scene — and being just 15, Louis's parents have to be there with him, which can be a little awkward — especially when the jokes get more risque.

"It can be a little stressful, especially when your family is sitting in the audience, but usually I'm like, 'Well, they'll hear what they're gonna hear and we can talk about it afterwards,'" said Louis.

The other comedians are welcoming, but he said some are surprised by his age.

"I'm like a fetus, not even out of the womb to them," said Louis.

But they're all happy to give him advice, especially if they're someone who has gone through something similar.

Performing with Louis the night CBC caught a show was a comedian from Chicago, who just also happened to be trans.

Lily Schulder also started in comedy at 15, but admits they weren't that funny,

To see Louis doing so well, "is wild," said Schulder.

"You know it can be nerve wracking, obviously it can be scary," said Schulder. "The idea of an audience member being transphobic, but if they're good jokes, they'll get people on your side."

The headliner of the night was Robert Jenkins, a Michigan lawyer who was impressed with the original material Louis performed.

"Writing is like any type of muscle," said Jenkins. "The more you exercise it the stronger it will get. Just write and try to go on stage as much as you can."

A bit of a 'grieving' process

Louis doesn't seem to take a break — even at home with his family he's constantly cracking jokes. Sometimes he'll grab his microphone and practice in front of a mirror. But when it's time for dinner he'll join his family at the dinner table.

Louis Brady's parents on having a transgender child

11 months ago
1:06
Karen and Tim Brady say it's difficult navigating through the many aspects of having a transgender child. 1:06

Three years ago Louis knew he was a boy — but it took him a year to tell his family.

"Eventually it was less of 'I'm worried they're not going to accept me' and more 'I just have to get over it, because if I hear she one more time I'm going to lose my mind,'" said Louis.

Telling his parents didn't go quite the way he planned. He told his dad Tim he wanted to change his name from Lauren to Laurence and his dad said that was silly. The reaction still haunts his dad.

"If I could invent a time machine and go back, I would tell myself to just shut up and listen," said Tim. Windsor Morning9:39Trans Teen Comic
Society is becoming more aware and more welcoming of people who are transgender. It's no longer as taboo as it once was. It's starting to be normalized. But it's still a difficult journey, especially for those come out at a young age. One Belle River teen is handling his transition and his new identity in a unique way - he's using stand-up comedy. Stacey Janzer introduces us to Louis Brady - high school student by day, trans comedian by night. 9:39

Louis said he thinks his parents thought this was a phase. His mom Karen said she didn't know how to react and that she wasn't prepared because she never saw any indication that this was a possibility.

After she was able to process, it hurt.

"We're so happy with him, but there is a bit of a grieving process for the child that you had before," said Karen.

They're both very supportive of their son now, but there's still one decision they're not sure about.

Louis wants to go through hormone therapy and have top surgery — both of which his parents are having him wait until he's 18 to do.

"If at 18 nothing does change and he decides to follow through on this path ... I've now made my child live three years in something he doesn't want to be," said Tim. "So, it's hard. Every day you wake up and [wonder] is that the right choice."

As difficult as it can be, there's still a lot of levity in the Brady home. Both mom and dad are proud of their son and his comedy. Tim said the first time he saw him on stage he knew that's what Louis was meant to do. He also knows some jokes are just funnier than others.

"We've learned that mom jokes are way funnier than dad jokes," Tim said. "Obviously everything that comes out of me is just really good and serious. Mom jokes are just way funnier, that's a known fact."

Louis' little sister Samantha is one of his biggest supporters, but she's too young to have ever seen him perform live at a bar.

Samantha was nine when she learned about Louis. At the beginning it was really hard for her.

"At first I absolutely hated it. I was like 'This is wrong.' I don't like this. This is just terrible. And then I started thinking along the lines of, 'It's not that bad,' and then I really started to embrace it," said Samantha.

Now Samantha is the one correcting people with Louis's proper pronouns and comforting Louis when he's misgendered.

Like any younger sibling she's not very keen to give a compliment to her older brother, but said he's a "good guy."

"Nice sometimes, but a bit annoying."

Even with her low-key affection, she's a supportive powerhouse when it comes to Louis and anyone who has a problem with him because of who he is.

"I want to say 'This is who he is,'" said Samantha. "This is who everybody in this community is, and you can't tell them that you're not this, because they are."

Louis is comfortable on stage and likes sharing his stories and winning over an audience. But his life is still a complicated one.

"As much as I'm like 'It's so funny,' being trans sucks," said Louis. "It's not fun. It's not a good time, but it's easier when you're getting on stage and you're talking about it and everyone's laughing at it."

The rotating comedians he performs with are accepting of Louis for who is he is — just a funny guy.

And all Louis wants is for the audience to have a good time.

"I just want them to enjoy themselves and leave knowing I made them laugh and made them forget about their crappy day job for a at least a couple of minutes."