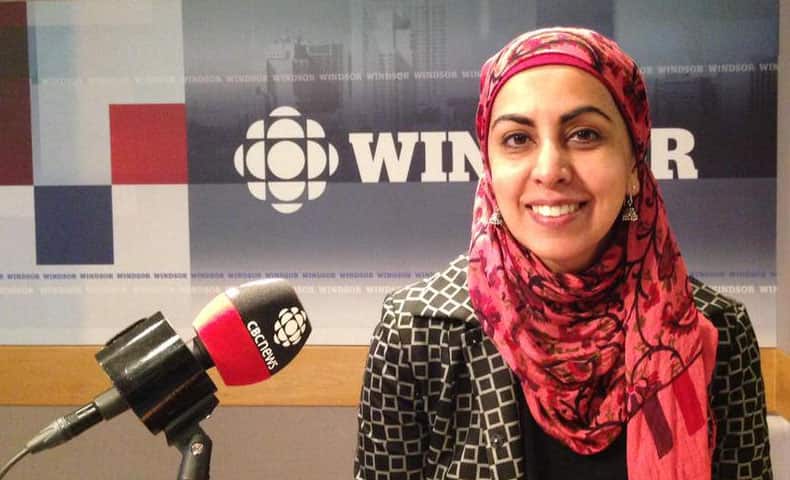 5 years agoVideo
2:20
One of Canada's most prominent Muslim women has likened the Conservatives' stance on the niqab to the Canadian government's previous decision to implement residential schools. 2:20

One of Canada's most prominent Muslim women has likened the Conservatives' stance on the niqab to the Canadian government's previous decision to implement residential schools.

Zarqa Nawaz, best known as creator of Little Mosque on the Prairie, told CBC's Windsor Morning that Stephen Harper's Conservatives are making a mistake and putting Muslim women in danger.

"This is the mistake the Canadian government made with aboriginal communities, saying they're barbaric, their language is barbaric, their culture is barbaric, we're going to remove them and put them in residential schools," Nawaz said Tuesday in Windsor, where she is to participate in the University of Windsor's Distinguished Visitors in Women's Studies Series.

Windsor Morning7:55Zarqa Nawaz in Windsor
She is the creator of "Little Mosque on the Prairie", a story she tells in a book called "Laughing All the Way to the Mosque". Zarqa Nawaz speaks at the University of Windsor tonight, part of their Distinguished Speakers in Women's Studies program. 7:55

In the 19th century, the Canadian government believed it was responsible for educating and caring for aboriginal people in Canada. The government thought their best chance for success was to learn English and adopt Christianity and Canadian customs. The thinking was that they would pass their adopted lifestyle on to their children, and native traditions would diminish, or be completely abolished in a few generations.

At least 6,000 aboriginal children died while in the residential school system, the Truth and Reconciliation Commission found.

"We have made this mistake before with other cultures," Nawaz said. "Now you can see how easy it was to make the mistake 100 years ago because we're doing the exact same thing today."

On Monday, the Tories said they will continue to emphasize security, which includes issues like the mission against ISIS, the Barbaric Cultural Practices Act tip line, revocation of citizenship for convicted terrorists and the niqab ban.

"I think Harper is throwing Muslims under the bus for the sake of opportunism. This is not an issue," Nawaz said of the niqab ban. "We waste a lot of political oxygen debating Muslim women endlessly."

The Conservative government, which dissolved in August and kicked off one of the longest election campaigns in Canadian history, attempted to impose a ban on face coverings during the oath of citizenship — which the Tories attempted to enshrine in law.

The ban was struck down by the courts, but the Conservatives have vowed to appeal the case to the Supreme Court of Canada.

"I think the maybe five women who wear it in Canada, we do not go to the Supreme Court of Canada and waste taxpayers' dollars for a woman who is happy to properly identify herself at the ceremony," Nawaz said. "She just wants to sing the national anthem. I think it's ridiculous."

Nawaz said a woman should have a right to choose whether to wear the niqab.

Jason Kenney, who was defence minister during the last term of government, said last week the niqab is "misogynistic."

"Let's be clear, this practice of face covering reflects a misogynistic view of women which is grounded in a medieval, tribal culture," he said.

"While the government has no interest in regulating what people choose to wear in their private lives, when you come and swear a public oath … in front of a judge and your fellow citizens, we think it's eminently reasonable to ask that for those 30 seconds, you do so publicly, openly and transparently as a proud new Canadian."

"I would say there is patriarchy and misogyny in all cultures and all religions, across the board," she said. "It's a fallacy to say Muslim women have a particular problem with it. I think that's something the media portrays, which is a bias against Muslim women – as if we're the only ones in the entire world."

Nawaz said the more Canadians talk about the niqab, "the more danger women who wear the niqab will be under."

Montreal police are investigating a complaint that a pregnant Muslim woman was attacked by two teens who tried to rip off her hijab.

"Is this our country? Is this the type country we want, where people will be attacking innocent women just because they want the right to choose?" Nawaz asked. "There are other women who make choices that all of us aren't happy with either. Their choices aren't demonized."

Kenney denied the niqab debate is fanning the flames of hostility toward Muslims. Kenney said it was "ridiculous" to link the government policy with that incident in Montreal.