Robert Brown, manager of planning and development services with the Town of Kingsville, says new rules dictate that any producer using grow lights in newer greenhouses "has to install both vertical and horizontal blackout curtains to limit light escape from the greenhouses."

For the past week, law enforcement agencies in Kingsville have been on the prowl at night, checking in on greenhouses failing to comply with municipal dark sky rules.

Robert Brown, manager of planning and development services with the Town of Kingsville, said new rules dictate that any producer using grow lights in newer greenhouses "has to install both vertical and horizontal blackout curtains to limit light escape from the greenhouses."

The goal is to minimize light pollution that can fill the night sky with red, purple, and orange lights.

Though site plan agreements drawn before 2015 mandated lighting restrictions, Brown said previous rules weren't as specific as today. Grow lights also weren't as common with Kingsville producers in the past.

"It's not something that was necessarily anticipated or even used necessarily in some older greenhouses."

According to Brown, no fines have been issued yet.

"A lot of it's just going to be trying to bring them into compliance with their site plan agreements," he said. "There aren't fines attached to it right now."

Despite concerns, however, Brown pointed out that only a "very small percentage" of greenhouses in the area use grow lights.

"Cannabis obviously is using it and that's very new," he said. "Typically only tomato growers use grow lights. Cucumbers and peppers, you don't typically see them using grow lights."

According to Brown, the purple lights are from cannabis growers — but according to Kingsville mayor Nelson Santos, those growers are "Tier 2" — and are governed by provincial regulations. 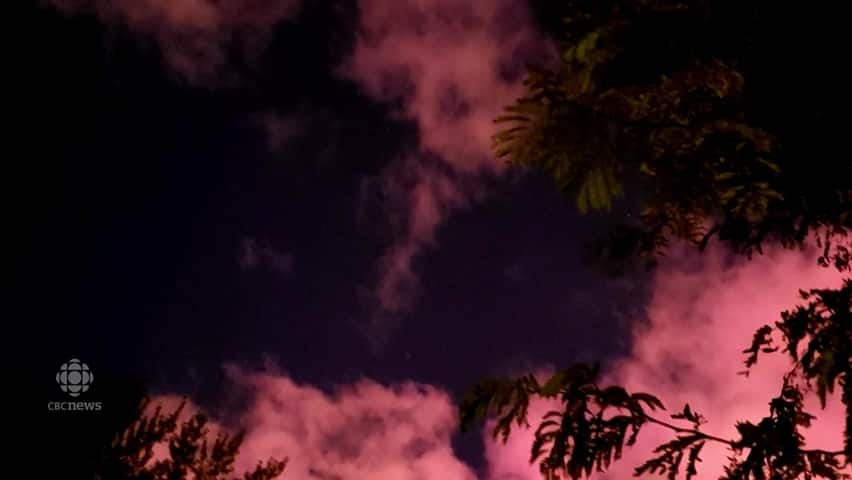 Greenhouse lights up the sky

1 year ago
0:30
Peter Loewen took these videos and photos of the greenhouse lights out in Essex County. 0:30

Tier 2 growers are prescription-use cannabis. Kingsville has no Tier 1 (recreational use) growers in town. Santos said concerns about odour or bright skies might have to be directed to the Ministry of Agriculture, Food, and Rural Affairs.

Kelly Sfetkidis, manager of communications for Leamington, said the town is in the process of gathering data.

"[Leamington] has had discussions with the Ontario Greenhouse Vegetable Growers Board, the Harrow Research Centre and OMAFRA to first ensure that any restrictions placed on light emissions do not place any undue hardship on the greenhouse industry," said Sfetkidis.

"The Municipality of Leamington will also utilize that data to help set standards in an effort to address the concerns of our residents. It is a delicate balance between economic development for our community and quality of life for our residents. The impact on the environment is also a consideration."

As the seasons change, temperatures grow colder and daylight becomes more scarce, it's likely that producers will increase their use of grow lights.

"It's about having light exposed onto the plant at specific times a day," said Santos. "Grow lights will actually even be on during the daytime in some areas, depending on the crop itself."

Santos added that light pollution from grow lights is becoming more recognizable because over two dozen greenhouses are moving toward year-round growing.

With files from Stacey Janzer