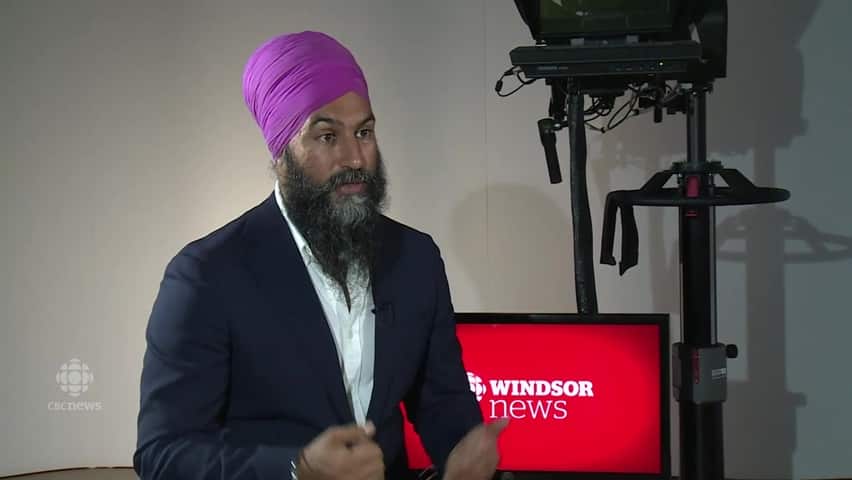 1 year ago
5:36
While in Windsor, NDP Leader Jagmeet Singh sat down for an interview with CBC Windsor News host Chris Ensing. The two discussed a range of issues, including racism, jobs and the opioid crisis. 5:36

Singh is in Windsor-Essex, as the second party leader to roll through the city, and he's focusing on healthcare and the auto sector for his visit to southwestern Ontario.

"Decisions have been made the eroded the manufacturing sector and you can clearly blame Liberals and Conservatives for that," said Singh, pointing to the lack of an automotive sector plan.

"Just this year, when there was an incentive put in place to encourage Canadians to buy electric vehicles, the one electric vehicle made in Canada — proudly made in Windsor — was excluded," said Singh. "It was only when New Democrats pushed back that the Liberals changed it."

Singh said local NDP candidates including Tracey Ramsey, Cheryl Hardcastle and Brian Masse had a lot to do with getting the Chrysler Pacifica included.

The NDP leader came to the CBC Windsor studio for an in-depth interview with host Chris Ensing:

"It feels great [to be back in Windsor]," said Singh, remembering his childhood growing up in Windsor.

According to Singh, there's a long history of support for the New Democratic Party in Windsor.

"They know we're going to make their lives better," said Singh, adding that manufacturing was a big priority for his platform.

Windsor resident Alicia Fox said she was "really impressed" by Singh's presence, in particular his views on a national pharmacare policy.

"It's something — like Jagmeet mentioned — that we've been promised for a long time and we haven't really seen any results for pharmacare," said Fox. "We pay taxes, we shouldn't have a problem paying for medication."

Fox also spoke with the NPD leader about climate change, adding that Singh told her the party will focus on the issue.

Despite Singh's trip to Windsor, not all residents were moved by his appearance.

Robert Zupanic said he already knows the candidate for whom he'll vote.

"It's nice to see the politicians are coming and giving our region some attention, but I don't think it'll change," he said.

Still, residents like Rosalynn Costea said it makes a difference when politicians come to town.

"It just makes me feel that they may listen to us and Windsor is on the map," she said. "It makes us feel important or known."

"It influences my mind," Costea said. "It just gives me more opportunity to meet with them and see what they're like."

Jagmeet Singh and the NDP's chances

For her part, University of Windsor political science professor Lydia Miljan said "anytime a leader comes to a region, it energizes the volunteers, it energizes the candidate, it brings the national spotlight to your region."

"So it's just part of the overall excitement, and all leaders try to make it to every riding, either just before or during the election campaign," she said.

She added that Singh typically talks more about Windsor than other areas "simply because he has a history here."

"But sometimes, those stories are kind of negative and they put us in a bad light, because that's when he says ... when he was in Windsor is when he experienced racism," Miljan said. "So I'm not sure that really helps the cause for local candidates necessarily."

Miljan said the biggest criticism she has for Singh is how long it took the NDP leader to win a seat in Parliament.

"He really wasted a lot of political capital, and he missed a lot of opportunities of being able to be in the national spotlight — really introducing himself to Canadians, " she said. "So, given that we have a 30-day campaign and the NDP nationally have such limited funds, it's going to be a very difficult campaign for them."

According to NDP annual financial returns posted to Elections Canada earlier in September, the party ended 2018 with assets worth $4.7 million and liabilities totalling $9.2 million. The party therefore has negative net assets of $4.5 million.

"The NDP are not starting this campaign from a position of strength financially," said Miljan.

Still, Miljan said the NDP's funds won't affect their chances in Windsor-Essex or other areas "where they have strong incumbents," according to Miljan.

Instead, she said the party's finances will "make it much more difficult for them to grow their vote and grow their number of seats."

"I think that for the NDP, when I look at the electoral map, where they're particularly vulnerable are in ridings in B.C. ... and also in Quebec, where the Liberals are also quite strong," said Miljan.