'I believe that Chatham-Kent is in a water war': wind turbine experts hear at public meeting

A group of Chatham-Kent residents aired their grievances about the quality of water wells at a public meeting on the impact of the North Kent wind turbine project.

A group of Chatham-Kent residents aired their grievances about the quality of water wells, at a public meeting on the impact of the North Kent wind turbine project.

About 100 people showed up to the Thursday night meeting which was organized by Samsung and Pattern Development, the two companies behind the project.

"I'm very upset," said Corrine Tooshkenig, a Walpole Island grandmother in attendance at the meeting. "I believe that Chatham-Kent is in a water war."

Residents of the area have been protesting the wind turbine site for the last few months, saying they believe the construction involving pile-driving is leaching black shale and hazardous materials into their well water.

"I think the meeting was very important," said spokesperson for Water Wells First, Kevin Jakubec, adding that the meeting gave members of the water activist group and the community an opportunity to ask some tough questions. 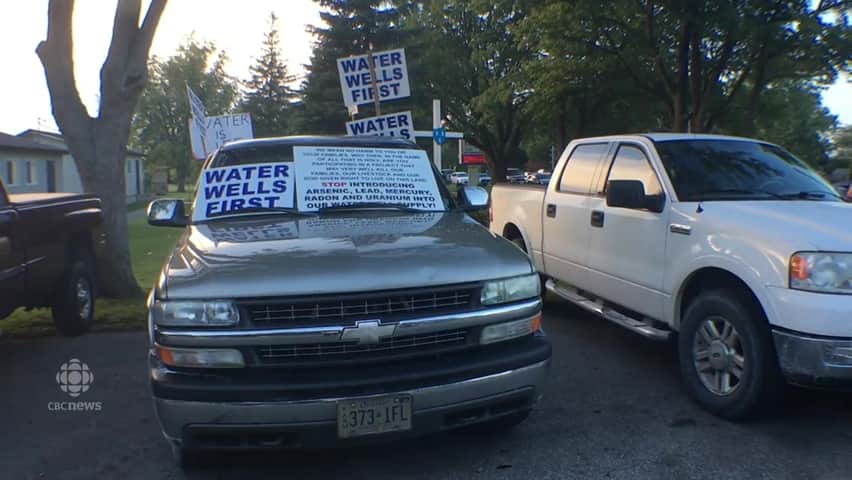 Experts were on hand at the meeting to provide answers, including Chatham-Kent's Chief Medical Officer of Health, Dr. David Colby.

Jakubec said his group directly asked Dr. Colby if "black shale particles [are] a health risk" but did not receive a clear answer.

"In consultation with members of Water Wells First before this meeting, we made the decision that if Dr. Colby did not answer that question in an open and transparent way that we would launch a complaint with the College of Physicians and Surgeons," he said.

"Because majority of people in North Kent feel very threatened by the release of black shale into the water wells and we need a definitive answer."

At one point, the participants raised their voices and even booed the chief medical officer.

Dr. Colby explained that since sediments are not soluble in water, they can not be absorbed by the body and pose no health hazard.

A resident brought him a bottle of water and asked him to drink it.

"The magnitude of the vibrations of the work has no consequences on the wells," said Storer Boone, who studies the impact of wind turbines on the ground for the companies involved in the wind turbine project.

Jody Law, a senior manager of business development at Pattern Energy said that the company completed 5 of 11 water well assessments in relation to community complaints.

Thirty-four wind turbines are planned for the area but none has gone up yet. However, work on the piles to anchor those turbines has begun, and is what is behind the water contamination, residents believe.

Law said that this project in Chatham-Kent is "unique" because it requires many more piles than usual.

In late August, protesters blockaded one of those pile sites so that workers could not get through.

A few days later, North Kent Wind demanded an injunction to stop them.

The work was interrupted temporarily. A judge will hear North Kent Wind's motion on September 28.

The Council of Canadians and Water Wells First are holding an open meeting Sunday at the Countryview Golf Club to discuss resident's concerns about their water wells.