Forget butter, how about crickets on your popcorn?

A Windsor restaurant is experimenting with Truffled Cricket Popcorn.

Chef Alvarez: 'We try to get people to try stuff that's outside of their comfort zone' 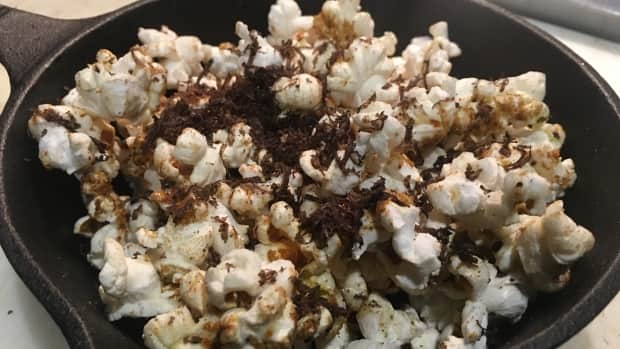 Add some protein to your popcorn. Cricket protein.

4 years agoVideo
0:52
It may not be coming to a theatre near you, but F&B Walkerville in Windsor, Ont. is trying out a new popcorn topping – crickets. 0:52

It may not be coming to a theatre near you, but F&B Walkerville in Windsor, Ont. is trying out a new popcorn topping – crickets.

"I looked around my kitchen and I threw it together," Alvarez told CBC. "But knowing all the flavours would work really well."

Alvarez says his restaurant is the first in Windsor to hop onto the 'wow factor' of the delicacy.

"For F&B, we try to get people to try stuff that's outside of their comfort zone. So coming here, they're familiar flavours but just boost it up a little bit."

Even though there's no 'fuzzy leg popping out' in cricket powder, Alvarez worried customers would shy away from his concoction. He's been pleasantly surprised with the early reviews.

"It was my first time trying cricket," said Philippe Octavien, owner of Black Magic Culinary Creations. "Very interesting. I loved the umami flavour, nutty, the truffle, the salt, a little bit of heat to it, it was amazing."

"It was very good. It was a crazy flavour punch to my mouth, but I mean that in a good way," she said.

"I think you would have to get around the stigma of just eating bugs, but having the crickets in powdered form is actually kind of nice because you don't think of it. To me, it's just another seasoning I can try to utilize," he said.

A bowl of Truffled Cricket Popcorn sells for $11. Alvarez expects to sell it until the end of May, or until he finishes the bag.