An estimated 1,500 Americans illegally and unexpectedly washed up in Canada late Sunday after strong winds blew them across the St. Clair River near Sarnia, Ont.

'We had 1,500 people who were in complete need of help, and everyone walked away alive'

An estimated 1,500 Americans illegally and unexpectedly washed up in Canada late Sunday after strong winds blew them across the St. Clair River near Sarnia, Ont.

They were participating in the annual Port Huron Float Down, during which people simply float down the river on rafts, inner tubes and other flotation devices from Port Huron, Mich.

High winds pushed them to a number of points along the Canadian shore. They had to be rescued by Sarnia police, the OPP, the Canadian Coast Guard, Canada Border Service Agency and employees from a nearby chemical company Lanxess Canada.

In the Canadian Coast Guard video below, you can hear thankful Americans praising Canada for its rescue efforts. 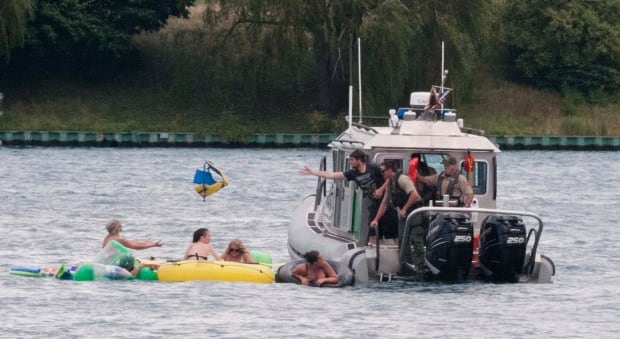 5 years ago
0:22
About 1,500 partying Americans had to be rescued from the St. Clair River and returned to the U.S. on the weekend after wind blew them to Canada. 0:22

"Thank you, Canada!" yells another.

"There were people in places you'd never think something would float, but there were Americans everywhere," Peter Garapick of the Canadian Coast Guard said. "There was no chance for anything floating or people on inner tubes to go anywhere but Canada."

Winds were consistently blowing at 10-15 knots and gusting up to 27 knots. That's sustained winds of about 20 km/h and gusts of 50 km/h.

"The people who take part in this are not mariners," Garapick said. "They don't look at the wind, the weather and the waves. We knew from the get-go, the winds were going to cause a problem. There's no question they were involuntarily coming to Canada."

Once the floaters were fished out of the water or simply gathered up on shore, they were shipped back to the U.S. on Sarnia Transit buses, with a police escort.

"It got crazy out there, but it worked out," the Sarnia Police Service posted on its Facebook page.

Police loading floaters onto buses to get them back to bridge and home. Strong winds blew them off course. <a href="https://t.co/8HFTkjYW8F">pic.twitter.com/8HFTkjYW8F</a>

The event has no sponsors, and nobody is responsible for its operation. There's no registration process, either.

Shipping groups have been critical of the Float Down over its safety implications and its impact on their operations in the river.

YouTube user Ernie Jacobs posted video of his group of floaters being "towed back to the United States from Canada. We had a little incident."

"They were terrified of entering another country without documentation. No one carries their passport or any ID, and a lot were drinking alcohol," Garapick said.

Some Americans, worried about landing in Canada without identification, attempted to swim back to the U.S.

"We had to pull a lot of people out of the water and say 'no,'" he said. "They were very upset, cold and miserable."

On the shore, passersby were giving their shirts off their backs to get people warm.

The last bus left Sarnia at about 7:30 p.m., after people were picked up at a local gravel pit.

Garapick called Sunday's float down the "worst in the history of the event."

"They don't have a mariner's sense. These are people who think they're going for a dip in the pool," he said. "We had 1,500 people who were in complete need of help, and everyone walked away alive."

He wishes the event would end.

"It would certainly make life easier and make it safer for everyone involved," he said. "But I don't see happening. Wishful thinking."

With files from Peter Duck