Police in Windsor, Ont., are on a disgusting stakeout — they're waiting for a man accused of stealing and swallowing a $20,000 diamond to have a bowel movement.

Police in Windsor, Ont., have accused in cell awaiting his bowel movement 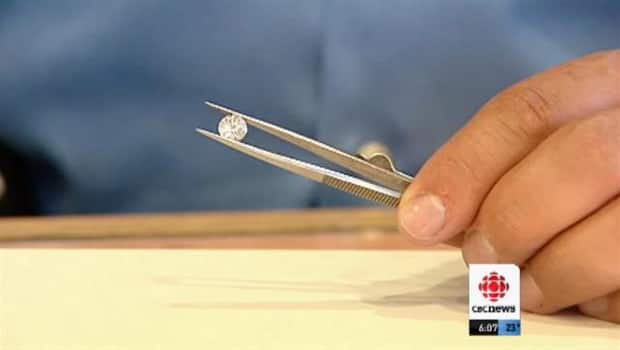 9 years agoVideo
2:30
Windsor Police are waiting for a man's bowel movement after he allegedly swallowed a diamond. 2:30

Police in Windsor, Ont., are on a disgusting stakeout — they're waiting for a man accused of stealing and swallowing a $20,000 diamond to have a bowel movement.

The 52-year-old man allegedly swallowed the diamond when he realized a sharp jewelry salesperson and police were on to him at Precision Jewellers.

Sgt. Brett Corey said the man is being kept in a special cell, without a toilet.

"We are monitoring his bowel movements, if you will. Our forensic identification people are the lucky ones who have to go through the waste to obtain the diamond once it passes," Corey said.

The man is charged with theft over $5,000 after he allegedly stole the diamond May 10.

Dan Thomas has been in the jewelry business for 25 years, and he has never seen anything like what happened at his store when the man allegedly tried to switch the diamond with sleight of hand.

Luckily, he had an alert clerk.

"She noticed that he had fumbled with the stone and she thought right away that he had switched the stone, so when it was handed back to her, she said, 'I don't think this is the stone I gave you.' And he said, 'No, no, this is what you gave me, I don't have anything on me.'"

But the clerk, who declined to be interviewed, didn't buy the man's claims. She recognized the man from a wanted poster circulating among jewellers. She asked the jeweller to check the stone. He determined it to be a fake and not the $20,000, 1.7- karat gem she originally gave him.

"And they just kept stalling him, and at that point, the jeweller came in and pretended to get a coffee and locked the door," Thomas said.

'You can see it on the video camera'

The saleswoman, meanwhile, wrote on a note "call the police" and passed it to a fellow employee who did just that.

Thomas, who has reviewed security footage from the day, said the man started to look uncomfortable and saw him allegedly "swallow the stone."

"You can see it on the video camera," Thomas claimed.

The police eventually arrived and arrested the man. Response time was six minutes. The savvy saleswoman said it felt longer.

But the question for the jeweller is what to do with it once it passes. There are ways of moving diamonds in the industry other than selling them to the public.

"But you never know, people might want it, saying, 'There's a whole story behind this diamond and I want it,'" Thomas said.