Mitch Albom's latest play Hockey, the Musical includes a Canadian God, who has decided to eliminate hockey as a sport. 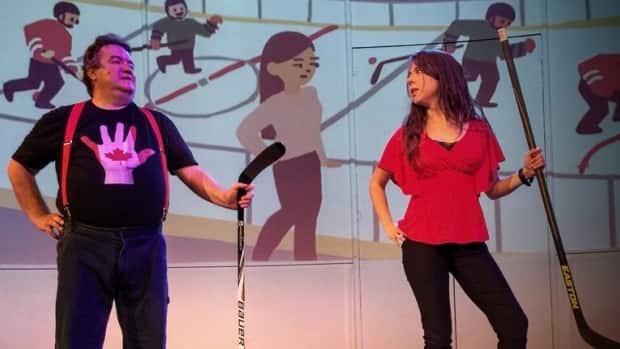 In Mitch Albom's latest work of fiction, a Christian God has decided to wipe hockey off the face of the earth.

Such a notion might incite traditional fans of the sport to drop their gloves, while others turn to a more diplomatic debate.

Albom just hopes he gets a good laugh from audiences when they see his play, Hockey, the Musical!, which opened Thursday at City Theatre in Detroit.

The award-winning journalist, author and playwright says his latest project is a vast departure from his other, more sombre work, like Tuesdays with Morrie.

"I always thought hockey was a quirky enough sport that, if you're ever going to do a musical about a sport — and make it funny — it would make a great subject," Albom told CBC's Windsor Morning host Peter Duck.

God is a Canuck

Humour starts right from the start when God determines humans have created too many sports and he decides to eliminate one altogether.

After dismissing the idea of flooding the planet, the deity sends to earth an angel, who arbitrarily decides to wipe out hockey.

The musical is packed with Canadian references, including a song that reveals God is actually a Canuck. It includes the lyrics:

"God brought us all forth from a place in the great white north. He created the loonie and Brian Mulroney and other things of that sort."

Windsor Morning2:43"God is a Canuck"
A song from "Hockey: The Musical!", the latest work by award-winning journalist, author and playwright Mitch Albom. It is scheduled for for a 5-week run at the City Theater in Detroit. 2:43

"The nicest people I know are always Canadian, so I wanted to throw a bone towards the fact that, if the deity had to pick a nationality, he'd probably pick Canada because they're good people," he said.