The Cougar, a light armoured vehicle, was donated to Windsor police by the Department of National Defence. 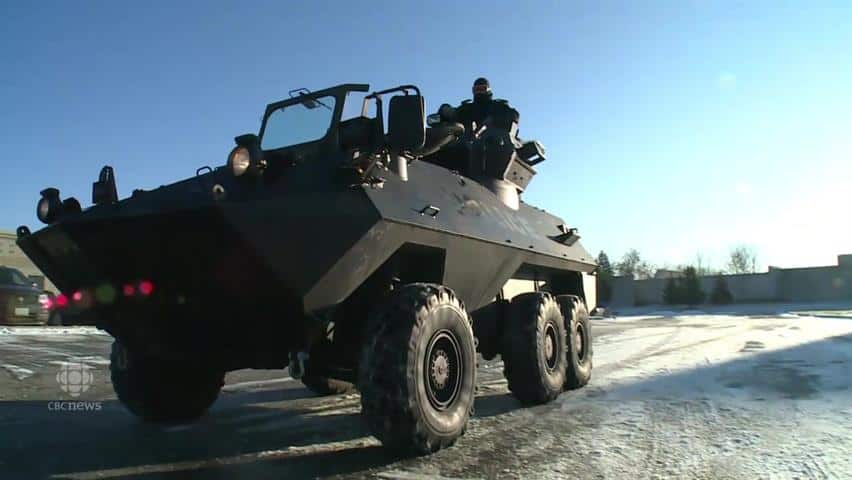 The Cougar, a light armoured vehicle, was donated to Windsor police by the Department of National Defence.

Similar vehicles were used in combat missions in Yugoslavia and in Somalia. The one given to Windsor police was used for training across Canada.

Police say it will mainly be used to protect officers from gunfire when dealing with the most dangerous calls and incidents, such as a barricaded gunman.

Deputy chief Rick Derus said the vehicle has the potential to save lives in an active shooter situation.

While the vehicle may look like a military vehicle, it has been "demilitarized," meaning all its weaponry has been removed, making it what police call an armoured rescue vehicle, and nothing more.

"The community should be at ease with the thought that we have something like this now, [something] that we didn't have before,” Police Chief Al Frederick said. "If it's used once in the next ten years, it's going to certainly pay for itself and show its value to this community."

"We are hopeful that the community understands the public safety aspect of its use,"  Derus said on Twitter, responding to criticism.

"There are clear guidelines on its use and deployment," he said in another Tweet.

Although it’s new to the Windsor Police Service, the vehicle was built in 1978.

Twelve police officers will be trained to operate the vehicle.

Radio-Canada reporter Andreanne Baribeau shot this video of the vehicle at the news conference.

Windsor police started inquiring about the armoured vehicle in 2011 when the Department of National Defence was decommissioning some of its vehicles and donating them to various police agencies.

Special Const. John Nayduk served in the military and is the one conducting the training on the vehicle.

"This is a combat proven vehicle. But we're not using it for combat. We're using it for rescue,” he said. "It probably rides better than my Jeep. It runs great...it's almost like you're floating."

"The trend seems to be to more violence, if you look at the bigger picture. And, we had an opportunity to pick this up, we got it cheap. So why wouldn't we?” he said. “It's just part of being responsible to the people that are paying our wages."

But according to Statistics Canada, the country's Crime Severity Index (CSI) fell by nine per cent in 2013. The violent CSI fell 10 in 2013 compared with the previous year, says Statistics Canada, marking the seventh consecutive decrease.

Locally, the violent crime rate in the Windsor Region was 18 per cent below the national average of 1,092 per 1000,000 people and 7.4 per cent above the provincial average, according to the Vital Signs report published last month.