It's an activity that's "definitely riskier" than something like bowling, but the operations manager of Windsor's Bad Axe Throwing says they've got all of the appropriate safety measures in place.

'As much as we want everyone to have fun, safety is our number one thing'

It's an activity that's "definitely riskier" than something like bowling, but the operations manager of Windsor's Bad Axe Throwing says they've got all of the appropriate safety measures in place.

Jarrett Jokiel said the family-owned Windsor location opened a week and a half ago.

"It's like darts, but you amp it up with sharper objects," he said.

"It's been overwhelmingly positive. It's been busy, non-stop."

He explained that every axe-thrower is talked through the safety precautions before touching an axe.

"As much as we want everyone to have fun, safety is our number one thing, just 'cause we are throwing sharp axes and we don't want anyone to get hurt," Jokiel said. 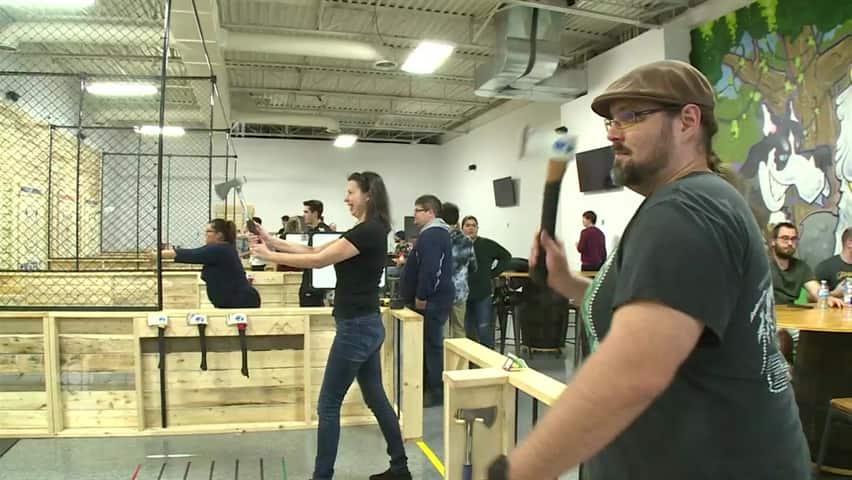 2 years agoVideo
1:03
This axe throwing location opened up in the city in November, and Windsorites are excited about it. 1:03

Furthermore, double bit axes — axes with blades on both sides— are also forbidden at the location because of how dangerous they are.

He said there have been no reported incidents at any of the Bad Axe locations, but also insists if someone were to get hurt at the Windsor location, staff are fully trained to deal with it.

'We always wanted to do this'

Richard and Shannon Veroszlinden say they were thrilled when they saw the sign for the location.

"We saw the sign, and were like, 'Yes! Finally. We always wanted to do this, so definitely we had to come in as soon as we could," Shannon Veroszlinden said.

"It's awesome coming here. It's great anger management if you have a stressful job. It's just fun to just throw something."

Neither of them have any safety concerns about the activity.

"They make sure that you're following the rules so that no one gets hurt, so that's part of the reason why we feel safe when we come here. There are rules,  it's not like you just come here and just randomly throw axes everywhere."

Coaches at the location also talk people through perfecting their axe throwing techniques.

"They're really good. They helped me actually figure out how to do it."

His wife said he landed five bullseyes on his first day.

And now, he's going to join an axe throwing league which stars up at the location in January.

With files from Sanjay Maru