Truckers worry about income with long waits to cross border

It's unclear what has been causing some of the delays, but truck drivers are worried for their pockets.

Ambassador Bridge delays have seen trucks backed up to Hwy 401

It's unclear what's causing some of the 80-minute delays for commercial vehicles heading into the U.S. via the Ambassador Bridge, but drivers are worried about money.

Truck drivers are only allowed to drive a certain number of hours a day. Even if they are stuck in traffic, it still counts as driving time.

"It's wasting my hour," said Gurjit Bhatti, who has been driving trucks since 2007. "It's going from my pocket, not from the company, not from the other people."

According to the Ministry of Transportation's guide book, drivers are not allowed to drive more than 13 hours in a 24-hour period. They are also not allowed to drive after accumulating 14 hours of on-duty time, which includes loading a vehicle and waiting at the border. 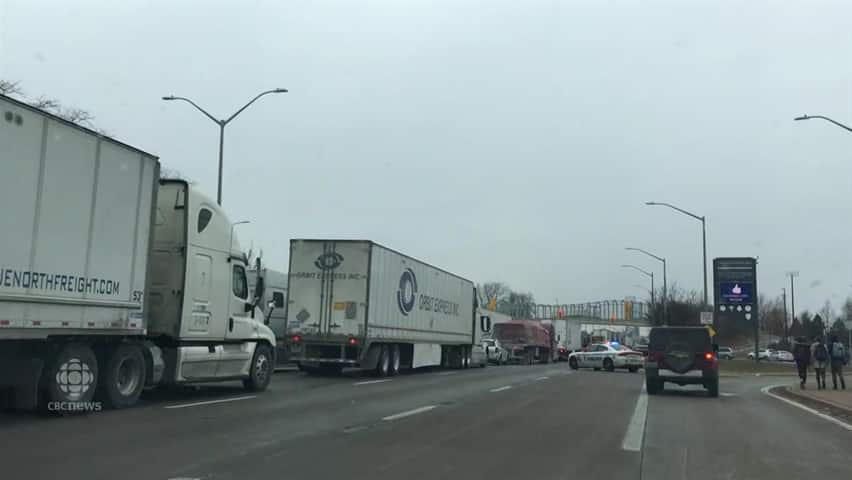 2 years ago
0:34
Check out this time lapse video of trucks backed up along Huron Church Road from the Ambassador Bridge all the way to Highway 401. (Rose St-Pierre/Radio-Canada) 0:34

On Wednesday, Bhatti said it took him two hours to cross the bridge.

Some believe the back-ups are due to the U.S. government shutdown, which started Dec. 22 — the longest in U.S. history.

CBC news has reached out to U.S Customs and Border Protection for comment on what's responsible for the long waits at the border but an automatic email reply from its spokesperson said no calls will be returned due to the "current federal funding hiatus."

Another concern is that the long wait times on the bridge are also delaying the delivery of parts to some assembly plants, Dave Cassidy, president of Unifor Local 444, says.

"Ultimately our customers lose, because we can't build the vehicles that we need to build," he explained.

Cassidy says they haven't seen a dip in productivity yet but adds thats it's "frustration for the drivers at this point."

With files from Jason Viau