Confession is good for the soul and maybe even someone's political future, PR experts say. But they are still not convinced Toronto's mayor is following any kind of coherent plan. 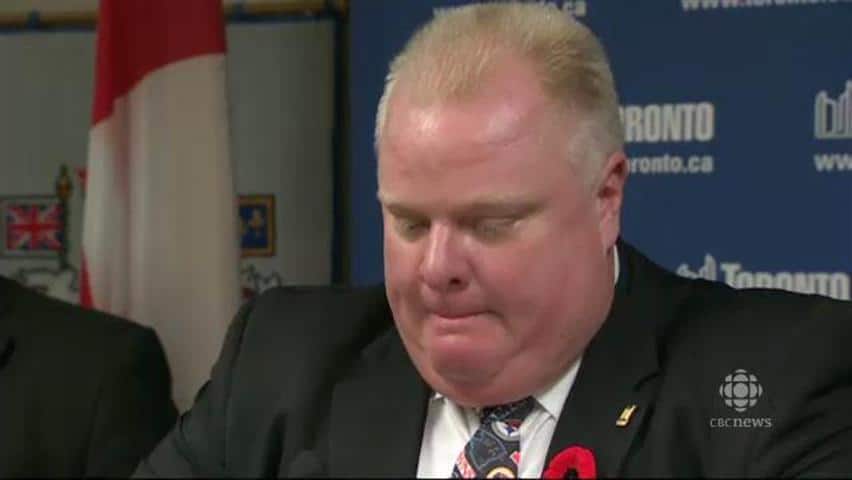 Pure chaos? Or a "brilliant" strategy to win back public sympathy and keep his job as Toronto's mayor?

Whichever the case, it was a wild day at city hall Tuesday — followed avidly in updated headlines around the world — as Mayor Rob Ford broke with months of denials to finally admit "I have smoked crack cocaine."

It was an admission that was totally at odds with the past six months and seemed to catch close advisers off guard — even, perhaps, his brother Coun. Doug Ford, who had only that morning embarked on an aggressive round of talk show appearances designed to shore up the party line.

The fifth estate's Gillian Findlay unravels the story of the man who has become the world's most controversial mayor. Watch The Rob Ford Story on Friday Nov. 8 on CBC-TV at 9 p.m., 9:30 in Newfoundland.

If there was a plan here, "it just continues to be one of the most unconventional and mind-boggling communications strategies that I've ever seen in my life," says Bill Walker, general manager of the PR firm Fleishman-Hillard's Toronto office.

"I don't know how in one day you go from your brother demanding that the police chief resign, to you admitting that you smoked crack cocaine, and you calling a press conference where everybody thought you were going to resign and then, instead, announcing that you are going to run again in the next election for mayor — and you're not leaving.

"It just indicates complete chaos to me."

On the other hand, by finally stepping up and taking responsibility for his actions, Ford has performed "the final mea culpa," says Patrick Gossage, a former press secretary to prime minister Pierre Trudeau. "It's brilliant."

Gossage agrees there has been no rhyme or reason to the mayor's PR strategy, nor has there been since reports first emerged in May that there was video evidence of Ford smoking crack.

"I know two [PR] firms that have been in and out of the mayor's office, and there's nothing you can tell him – nothing," says Gossage.

Still, he feels that Ford's confession is at least a partially calculated move to ingratiate himself with Toronto voters for the 2014 election after months of rumour and speculation about his drug use. And that it is a tactic that has been successful in the past.

In 2001, the late Alberta premier Ralph Klein made a public confession of his problem with alcohol and pledged to quit drinking after he was seen stumbling drunk into a homeless shelter and berating a homeless man.

Arguably the most famous political precedent is that of former Washington, D.C., mayor Marion Barry, who was caught in a police sting smoking crack in 1990. Barry blamed police for targeting him but ended up serving six months in prison. In 1995, he was re-elected mayor for his fourth term with 47 per cent of the popular vote, and still sits on council.

Gossage says that Rob Ford might actually be able to take a valuable lesson from Barry's experience.

Barry's re-election slogan was 'I'm not perfect, but I'm perfect for D.C.,' Gossage observes. "I'll bet you Ford steals it."

'The wildest, longest pursuit I can recall'

Ford's unexpected announcements Tuesday follow almost six months of heated language in the media over the existence of a video showing the mayor smoking crack cocaine.

During his news conference, Ford said that "I feel like a thousand pounds have been lifted off of my shoulders," and that "the past is the past and we must move forward."

Mark Sherwin, president of Toronto-based crisis management firm CorpWorld, says that while the confession was a long time coming, it should ultimately benefit Ford politically as it tends to make him seem more human.

"The fact that someone confesses, that someone says, 'Yes, I did this' or 'I was involved in this and I regret it,' that is better than somebody being caught in the act," says Sherwin.

But while he applauds Ford for finally unburdening himself, Sherwin also says the mayor did great damage to his image by not confessing sooner.

When the Toronto Star and U.S. gossip site Gawker.com first reported in May on a video showing Ford smoking a crack pipe, the mayor repeatedly and vociferously denied both using crack and the existence of the video.

Outside his Etobicoke home on May 17, Ford called the media reports "ridiculous" and "absolutely not true." More than a week passed before he gave any real comment, sending out his brother Doug to hold down the fort.

On May 24, Ford gave his now famous press conference. "I do not use crack cocaine," he said. "Nor am I an addict of crack cocaine." Furthermore, he refused to comment on a video he said he had "never seen or does not exist."

The messaging remained consistent right up until Monday morning when he told a sympathetic radio host that "I can assure you … I do not use drugs, I drink."

In late August, Ford admitted to smoking "a lot" of marijuana in the past, and on his Sunday radio show this past weekend he apologized for getting "hammered" on two public occasions, and promised not to do that again.

"That was pure stupidity," he said Sunday. "I just got to maybe slow down on my drinking." But he still wouldn't comment on a "video that I have not seen."

"[Ford] set himself up for the wildest, longest pursuit I can recall, until he finally did confess.

"We always recommend to our clients, if something has gone wrong, if something has happened, admit it and move on," says Sherwin. "But the longer the pursuit goes, the worse it is for the individual involved."