Environment Canada says spring will be warmer than normal

El Nino has contributed to a milder than usual winter for most of the country and will help continue the warming trend into March, April and May, meteorologists say.

Milder than usual temperatures for March, April, May predicted right across the country

With the end of winter in sight, Canadians are beginning to speculate about spring. Word on the street is that this year, people are hopeful it will be a warm one.

Is this optimism based on fact? Or is it just wishful thinking?

"Certainly the trend that we're seeing overall for the spring across the country is milder than normal," said Geoff Coulson, an Environment Canada meteorologist.

The only part of Canada where warmer than usual spring weather isn't predicted during March, April and May is an area off the coast of Labrador, Coulson said.

A map prepared by Environment Canada climate experts shows the highest probabilities of warmer temperatures are on the west and east coasts, he said, including British Columbia, Yukon, much of the Northwest Territories, parts of northern Alberta and northern Saskatchewan, Nova Scotia and parts of Newfoundland.

But "everything is relative," when it comes to what's considered "milder than normal," Coulson noted. In Arctic regions, a relatively warm day at the end of March might be –10 C, as opposed to a more typical –15 C. By late April, the daytime high could be around 0 C instead of –5 C, he said.

In southern Ontario, southern Quebec and the Maritimes, people could see temperatures in the double digits by the end of March and beginning of April this year, he said. Warmer spring conditions will likely reach more northern areas — such as Thunder Bay, Ont., Winnipeg, Saskatoon and Edmonton — around mid-April.

For many parts of of the country, Coulson said, spring this year will be a continuation of the milder-than-normal trend seen throughout the winter, largely due to the effects of El Nino. The phenomenon happens every two to seven years, he said, when waters in the Pacific Ocean are warmer than usual.

El Nino tends to have its strongest effect on fall and winter weather in Canada, Coulson said. But even though it will "become less of a driver" in the spring, its influence will likely continue to contribute to milder conditions.

Cold snaps and snow not over

But don't put your winter coats away, Canada.

The prediction of a warmer spring doesn't mean we've seen the end of wintry weather, Coulson cautioned, even after spring's official arrival on March 20.

"What a lot of folks tend to forget is when we mention milder than normal for a month or for a season, the tendency is to think that every single day is going to be warmer than normal," he said. "These are average trends over a long period of time and it's still quite possible to get swings in temperature and cold snaps and messy storms." 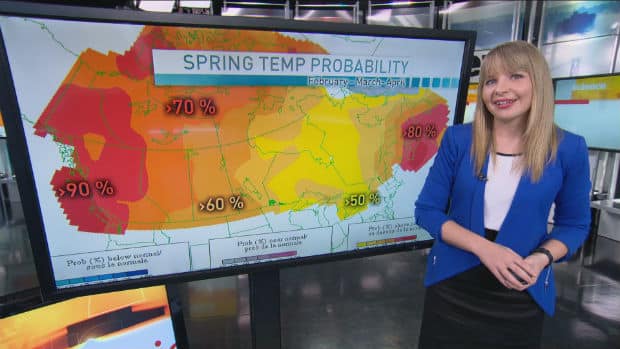 El Nino and our spring